The legend of Rajinikanth

For 41 years, he has kept audiences and producers happy. And, surprisingly, it is the superstar's humility and sense of being grounded that best explain his unmatched phenomenon 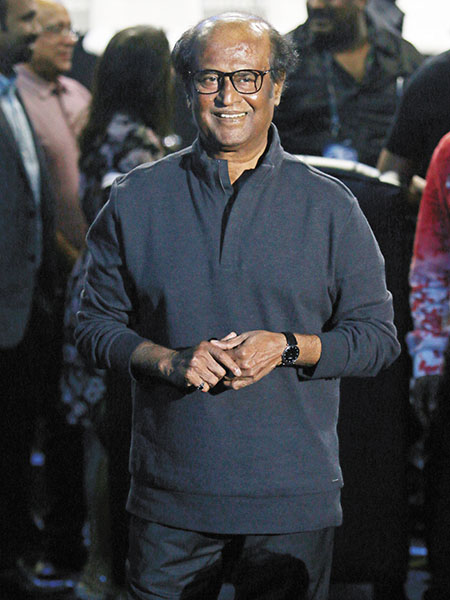 The first ever shot that Rajinikanth gave as an actor involved throwing open a gate in what was to become his inimitable style. It was for the climax of the 1975 superhit Tamil film Apoorva Raagangal (Rare Melodies) directed by the late K Balachander. “Little did we realise then that he had just opened the gates into the hearts of the Tamil people,” says director SP Muthuraman, who went on to direct the actor in 25 films. Balachander, who gave Shivaji Rao Gaekwad—a Maharashtrian born and brought up in Bengaluru—the break he had been desperately looking for in the Tamil film industry, and was the one who rechristened him Rajinikanth, had an inkling about his rise as an actor from the start. “Wait and watch,” the director had told his assistant after Shivaji gave an audition for the role. “This boy has fire in his eyes. He will be a phenomenon some day.”

Balachander’s words were prophetic. Four decades later, Rajinikanth, 66, is a one-man industry. He has acted in over 160 films and is among the highest paid actors in Asia. Such is his stardom that he can effortlessly carry off the huge budgets of his films—his 2010 film Enthiran (Robot), with its budget of Rs 132 crore, was India’s costliest movie when made, and 2.0, Robot’s sequel, for which he is currently shooting, has a budget of Rs 400 crore, which again makes it the costliest ever Indian movie to be made. He is the first Indian actor to have appeared in four different formats of cinema—black and white, colour, 3D and motion capture technology. His fan clubs number in excess of 50,000. His fans cut across age groups—from children to senior citizens and across regions—from India to Japan. His words sway the masses so much  that even established politicians in Tamil Nadu fear his possible entry into politics. His rise to No 30 on the 2016 Forbes India Celebrity 100 List from No 69 last year is inevitable.

He would be even higher but consider this: He acts in just one movie every two years. He does not promote his films. He does not endorse any products. He keeps a low profile and on the rare occasions he is seen in public, he appears as he is: Bald, at times dishevelled, and without make up. He has certain limitations as an actor. For instance, he is not a good dancer. And yet, even as his peers have faded away, either into retirement or to elderly roles, Super Star, or Thalaivar as his fans call him, continues to play the protagonist in films replete with action and drama. His films rarely fail at the box office (when they do badly, he feels guilty and reimburses distributors, something perhaps no star has ever done) and the craze among his fans continues to grow.

What is the secret of his unparalleled success and the longevity of his superstardom? Some attribute it to his goodness, some to God’s grace, a few to his shrewd mind and hard work, and some to just plain luck.

Bollywood star Akshay Kumar, who shares screen space with him for the first time in 2.0, is more specific. “He is a producers’ man,” he tells Forbes India. “In choosing a script, he looks for commercial viability first,” adds Sreedhar Pillai, a film critic. “He ensures his films have all the elements in the right proportion so that they not only appeal to his fans but are also profitable to the distributor, theatre chains and the producer.” Rajinikanth films have a fair share of melodious songs, fights, ‘punch’ dialogues, comedy and emotions. “If you ask me the reason for his longevity, it is because he cared for the box office,” says Pillai. “He believes in rewards at the box office rather than awards.”

Management guru Daniel Goleman, in his book Emotional Intelligence, says successful people must not only know their strengths but also their limitations. In his 41-year-long career, Rajinikanth has been aware of his limitations and, unlike his peer Kamal Haasan, rarely experimented with roles. He sees himself as an entertainer who caters to the mass market.

On the sets, too, he is down-to-earth and keeps the producer and script in mind. “He is always on time and will be ready with make up at least 15 minutes before a shot,” says Muthuraman, who also had a hand in repositioning him as a hero (Rajinikanth started off doing negative roles) and making him a commercial success. Some of the films in which they worked together include Murattu Kaalai (Wild Bull, 1980), Priya (1978), Paayum Puli (Pouncing Tiger, 1983), Velaikaran (Servant, 1987) and Aarilirunthu Arubathu Varai (From 6 to 60 years, 1979).

Between shots, Rajinikanth would rather read spiritual books than demand to be driven to a plush hotel. “If the shoot is in Chennai, his food comes from home. If it is elsewhere, he will eat what is served to the entire crew,” says Kalaipuli S Thanu, who produced Rajinikanth’s recent film Kabali (2016). “He will never allow a producer to spend more than what is needed.” It was Thanu who gave Rajinikanth the title of ‘Super Star’ after Bairavi released in 1978.

Thanu shares an incident from the sets of Kabali. He and the director (Pa Ranjith) wanted an elaborate climax involving a big set and 200-300 people. “When Rajini sir came to know about it, he told us there was no need for it as the script did not demand it. We shot the scene with a handful of people,” says Thanu. “If only other successful actors follow Super Star’s footsteps, the film industry will be better off.” 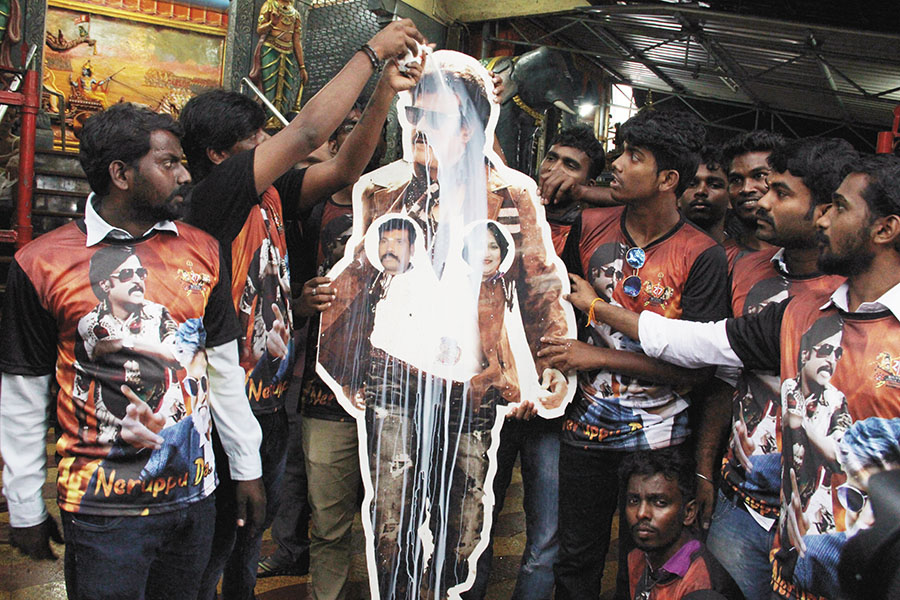 Rajinikanth’s fans revere him so much that they throng to the theatres before dawn to watch his films and bathe his posters with milk
Image: FotocorpMuthuraman cites another incident during the filming of Sivaji The Boss (2007), a high budget film by AVM Productions, directed by S Shankar. During a schedule at AVM Studio in Chennai, all the actors were provided with vanity vans and a high-end one was also arranged for Rajinikanth. “When he came to the set, he headed straight for the make-up room in the studio. When I told him a vanity van had been arranged for him, he said there was no need for it and asked us to return it,” says Muthuraman.

These incidents make him popular with everyone in the film industry. Unlike other stars, he does not move around with an entourage. The only person who accompanies him to a shoot, apart from his driver, is his manager. He does not have a dedicated make-up man and gets it done by the person arranged by the production house on the sets. “He does not ask us to pay for his driver, make-up man, security or his manager,” says Thanu. “Rajini sir himself pays salary to the solitary manager who accompanies him.”

The simplicity stems from his personal life. Says Muthuraman, “In real life, he dresses up simply, eats simple food, at times even at roadside eateries, and drives around in a simple car.” For years, he drove a Fiat and preferred an Ambassador when he was chauffeured around. He then switched to a Honda City and that remained his vehicle for a long time, until recently, when his son-in-law (actor Dhanush) presented him with a BMW.

“He has not forgotten his past,” says VM Sudhakar, who was his senior at the Chennai Film Institute and manages his 50,000-plus fan clubs. Rajinikanth had to work as a bus conductor in the Karnataka State Transport Corporation to make ends meet. When he chose to do a course in acting at the film institute, his friends at the transport corporation gave him the money to buy the application form. And he has not forgotten that. He still goes to Bengaluru, often staying at their homes and continues to be close to his friends from the film institute. “I know him since 1974 and the way he treats me has not changed except that both of us have aged,” says Sudhakar.

Ask Akshay Kumar about that one quality that he likes in Rajinikanth and pat comes the reply, “He is a very, very humble man. People adore him [for that quality].” Balachander too gives us a glimpse of that in the foreword he wrote for the biography of the actor The Name is Rajinikanth by Gayathri Sreekanth. “Although unprecedented adoration and adulation as well as unparalleled popularity and power can go to any other person’s head—and it normally does—it is really amazing that Rajini still has the grace and humility to place all his achievements at the feet of his guru and his God—treating them both the same,” he writes. “So it is not that I discovered Rajinikanth, but what I discovered in Rajinikanth that amazes and pleases me.”

He may have become a huge success, but Balachander recalls in the book, “For, when I call—he still rushes, when I smile—he still blushes; and when I ask him to sit—he still nervously perches on the edge of his chair; when I look into his eyes, I see the same awe, the same reverence, the same respect and gratitude that I have seen and recognised all across these 30-odd years.”

The humility is not restricted to just his guru. “From producers to light boys, he treats everyone with the same respect,” says Muthuraman. “He remembers their names and calls and inquires about their family. These things come naturally to him.” He goes out of the way to make his co-stars comfortable and unlike other stars, he has no qualms about giving them greater space in his films. “Films like Mannan (Emperor, 1992), Padayappa (1999) and Chandramukhi (2005) would not have been massive hits if the leading ladies were not given a prominent role as demanded by the script,” says Thanu.

Rajinikanth, who attributes his success to the grace of God, draws unparalleled devotion from his fans. And it is not just because of his on-screen persona—many other reasons that endear him to them.

In public life, he has been open, never trying to hide things, including his wild life before his marriage; his understated philanthropy—he often gives away money for education, health care and marriages to deserving people. Akshay Kumar calls this ‘his goodness’.

For the movie-crazy people of Tamil Nadu, films are akin to a religion and the stars are seen as demi-gods. And if there is one demi-god who seems to have lived up to the reputation, in their view, it is Rajinikanth.