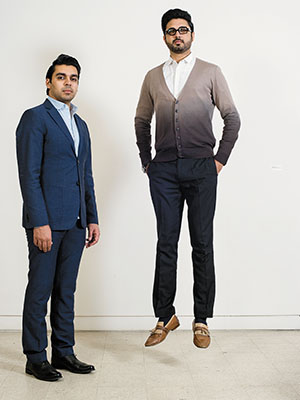 Image: Amit Verma
While studying at NIFT, Shivan (left) and Narresh realised they had complementary skill sets. That’s when they decided to come together

Imagine wearing a stylish sari to the beach. Sounds incongruous, even prudish? Not to designers Shivan Bhatiya and Narresh Kukreja, whose line of bikini saris and resort saris is getting them noticed in the world of fashion.

Their invention brings the grace of a sari to the bikini through a trail of a yard-and-a-half of georgette/crepe, which can be draped “in 10 different ways”. The resort sari is a tailored sari made of Italian jersey that doesn’t require pleating or ironing, and has pockets for a cellphone and sunscreen. It can be teamed up with a bikini for a “beach to bar” look. Sounds cooler now?

The duo hit upon the idea for the bikini sari when a client approached them to create a “modest” bathing suit she could wear on cruise with her husband; she felt like a misfit in her traditional Indian outfits. The lady was thrilled and even called them in the middle of her holiday—it was the perfect ensemble to be seen in walking down the deck. “The idea also aimed to impart a sense of confidence to Indian women, to be able to wear a swimsuit that caters to the needs of the Indian societal setup,” says Kukreja.

Their twist to the traditional sari has become quite a hit, with celebrities like Dita Von Teese, Padma Lakshmi, Nicki Minaj and Bipasha Basu flaunting their designs at galas and events. Women even wear the bikini sari to bachelorette and cocktail parties. It has earned Bhatiya and Kukreja media coverage in the international press, including The New York Times and Daily Mail.

Their journey began when the two met at the National Institute of Fashion Technology, Delhi. Kukreja was specialising in women’s wear and Bhatiya in leather corsetry. Both had a penchant for participating in design competitions. When they discovered that they complemented each other’s skill sets, they decided to put their heads together, and won most of the competitions.

One such win, the Mittelmoda International Beachwear Awards 2006 in Bali, got them a scholarship to study in Italy. Meanwhile, LYCRA in Italy was inviting entries for designing with its 2.0 bonding technology, which was to be used in intimate apparel by fashion schools across Europe, USA and South East Asia. The duo’s participation introduced them to the bonding technology, which they would later use in their swimwear. 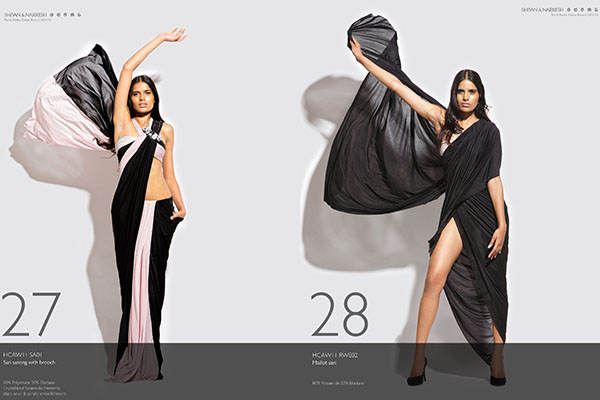 That same year, they showcased their first luxury swimwear line in Cannes at the Mare Di Moda Beachware Awards. Their stitch-free swim line, using the new bonding technology, earned them a special mention. “Our victory at Mare Di Moda became a turning point as it brought out our passion for swimwear and convinced us to pursue this segment,” says Kukreja.

After they returned to India, they reached out to their families for financial support and started their own studio in New Delhi’s Hauz Khas Village. Along with the prize money from reality TV show Let’s Design, they managed to import three lycra-specific machines. They finally launched their swimwear brand, Shivan & Narresh, in 2010 in India, becoming the country’s first and only swimwear designers.

The time was right. There was a huge unoccupied and unexplored market for swim-, cruise- and resort-wear for the Indian luxury holiday connoisseur. Besides, despite a vast coastline and an urbanscape dotted with private pools, there was no swimwear brand in the country.

Now, four years later, they have 25-35 people working with them and their label is sold through several Leela and Taj properties across India. They also sell to a store in London and one in Kansas City. They prefer the franchisee model and partnerships with hotels and resorts as “there are limitations and problems running your own store”.

The takers for their line are affluent women. Most have kids, bear stretch marks, and like the freedom to customise their outfit and feel happy about what they are wearing. The duo appreciates this and the fact that the Indian body type is unique—it doesn’t conform to any standards. Hence, the option for walk-in customers to customise their swimsuit. There’s a stylist on call; the buyer can make changes to the designs on the rack to make it more modest—or bolder, change colours, swap panels, add or subtract straps. An average ready-to-wear swimwear ranges from Rs 10,000-23,000. Their handcrafted bespoke ranges from Rs 75,000-120,000.

Profits are a hard nut to crack, but the company has just about broken even. Regardless, the duo is firm on their plan to expand to 200 stores. 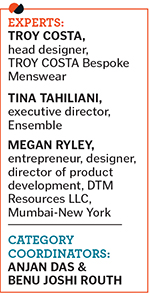 Meanwhile, Bhatiya and Kukreja have taken their next leap and created a special edition mastectomy blouse, launched in February 2013 at the Design One Expo spearheaded by Sahachari Foundation. NGO Passages is funding the first set of 50 blouses and the Sahachari Foundation is the second donor of 150 blouses to the Women’s Cancer Initiative—Tata Memorial hospital.

They have also collaborated with Ang Lee for Life of Pi, where they created 81 designs using vintage fabrics. Next, the duo will be showing in the Albuquerque Film and Media Experience in June 2014, to an audience of Hollywood celebrities.

Over the next five years, the focus is to enlarge the umbrella to menswear and kids’ wear, while propelling the retail wing of the company to open more standalone and shop-in-shop destination stores in partnership with hotels and resorts.

More power to them, say the ladies.