Japan's Abe-nomics is Desperate like its Kamikaze Strategy in WWII 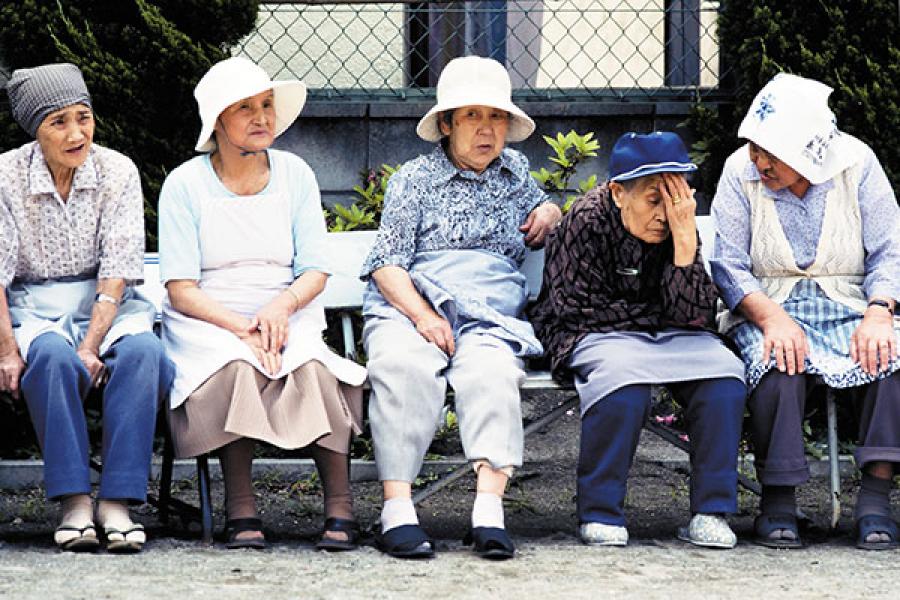 Image: Corbis
Shinzo Abe’s policy fails to address the problems arising out of an ageing population

Will second-time Prime Minister Shinzo Abe’s ‘three arrows’ strategy of pumping more liquidity into the system to boost inflation and revive the Japanese economy work? It is difficult to visualise, since Abe-nomics’ ultimate problem is that it does not address Japan’s two problem Ds—debt and demography.

Japan is one of the most heavily indebted developed countries: Its total debt-to-GDP is over 500 percent, compared to the US’ 370 percent; Japanese gross sovereign debt is around 240 percent of its GDP, while its net debt is around 135 percent, substantially higher than most developed countries. The government borrows in order to finance over 50 percent of its spending. And Abe’s plan is likely to lead to a further deterioration in public finances.

To stabilise debt levels, Japan would need to move to a structural surplus (budget deficit before interest payments on government debt) of 3 to 4 percent, compared to a current deficit of around 8 percent. Given the lack of growth and deteriorating demographic profile, the required tax increases or spending cuts may not be feasible.

If Japan has to resort to financing from foreign investors rather than domestic ones, then its interest rates may increase, perhaps significantly. If current policy initiatives result in inflation reaching its target level of 2 percent, then interest rates on Japanese government bonds (JGBs) will need to rise. If Japan’s risk profile continues to deteriorate, then investors may require more compensation to purchase JGBs.

Higher interest rates will raise stress on government finances. Despite low interest rates, about 25 percent of tax revenue services government debt, compared to 6 percent in the US. At higher rates, interest payments will be an unsustainable proportion of tax receipts.

Higher JGB rates will also trigger problems for Japanese banks, pension funds and insurance companies. For example, JGBs make up around 24 percent of all bank assets. The figure is expected to be 30 percent by 2017. According to the Bank for International Settlements, the JGB holdings of Japan’s banks equate to 900 percent of their Tier 1 capital, compared with about 25 percent for UK banks’ exposure to gilts and 100 percent for US banks’ exposure to US Treasuries. Higher rates increase the risk of a Japanese banking crisis.

An ageing population, a shrinking workforce and an increasing dependency ratio (the number of aged supported by the number of workers) are integral to Japan’s problems. The current initiatives will have limited impact on low fertility rates, immigration levels or increased labour force participation rates. Abe’s programmes may exacerbate economic risks without addressing the demographic problems.

Like in other developed nations, Japan’s fundamental problems are within its real economy. It needs to deal with debt levels, demographic problems, and declining competitiveness and industrial leadership, which underpinned its recovery after World War II. These problems cannot be dealt with by adjusting fiscal and monetary policy.

Until 2013, and Abe-nomics, years of disappointing economic data and moribund policy meant it was fashionable to dismiss Japan. But it remains the world’s third largest economy after the US and China.

Japan is also financially significant. Its large foreign asset holdings, totalling around $4 trillion, make it the world’s biggest net international creditor. Bank of Japan (BoJ) is the largest investor in US Treasury bonds, with holdings of around $1 trillion. Japanese banks, insurers and corporations are major suppliers of global investors, wielding significant influence in financial markets.

Abe-nomics has implications outside Japan as well: Its economic revival would assist the global economy recover and generate demand for imports to Japan; Japan would also continue to be a source of capital to the rest of the world.

Failure would be equally significant: If growth does not pick up, then a combination of budget and trade deficits that require financing would affect the global economy; Japan’s overall current account may move into deficit as soon as 2015. Japan would gradually run down its overseas investments, selling foreign assets and repatriating the capital. The selling pressure would affect prices and rates for a wide range of assets, transmitting financial market volatility.

At the same time, BoJ’s aggressive monetary policy and devaluation of the yen may lead to large outflows of private capital from Japan. Seeking yield and preservation of purchasing power, Japanese investors may move money into foreign markets, with destabilising side-effects.

In the 1990s, aggressive easing by BoJ in the aftermath of the end of Japan’s bubble economy led to a large and rapid outflow of capital, fuelling rapid increase in debt levels, especially in Asia, which was one of the factors underlying the Asian monetary crisis of 1997-1998. There is now a heightened risk of a repeat of that episode.

The devaluation of the yen, against other Asian currencies such as the Chinese renminbi and South Korean won, increases Japanese export competitiveness at the expense of its rivals. It forces affected nations to become ‘shock absorbers’ to Japan’s attempted revitalisation, through reduced exports and lower growth.

But this risks retaliation. Facing a reduction in competitiveness, China, South Korean and Taiwan may intervene in foreign exchange markets to reduce the appreciation of their currencies and introduce trade restrictions to curb Japanese exports. In seeking to offset the effect of an aggressive Japanese monetary policy, affected countries may be forced to reduce rates, risking over expanding credit supply and increasing the risk of subsequent debt crises.

But ultimately, Japan’s significance lies in the fact that it is a laboratory for the global economic and financial crisis. Its predicament has marked similarities, and some differences, with that in many developed countries. In its policy successes and failures it may provide a useful guide to the fate of other troubled economies.

Shinzo Abe’s programme is evocative of the kamikaze or ‘Divine Wind’. By the end of World War II, Japan had suffered several crucial military reversals: It lost the air war due to losses of aircraft and flight crew, and a declining economy made it unable to support the war effort. Desperate, Japan used kamikaze attacks against ships of the allied forces, where pilots crashed their planes into targets. Some 4,000 kamikaze pilots died in these attacks. But the poor success rate (only a small number of attacks hit their targets) was not able to change the course of the war.

The attacks were based on tradition and culture, embodied in the Samurai and Bushido code of conduct, where death is preferable to defeat. The current policy initiatives have a desperate kamikaze element. Like the war efforts, it is unlikely to succeed in changing Japan’s economic trajectory.

(This is the second part of a two-part article on Abe-nomics. To read the first part click Why Abe-Nomics May not Work for Japan )