Food tech platforms Swiggy and Zomato are fighting a pitched battle for supremacy, backed by top investors Naspers and Alibaba 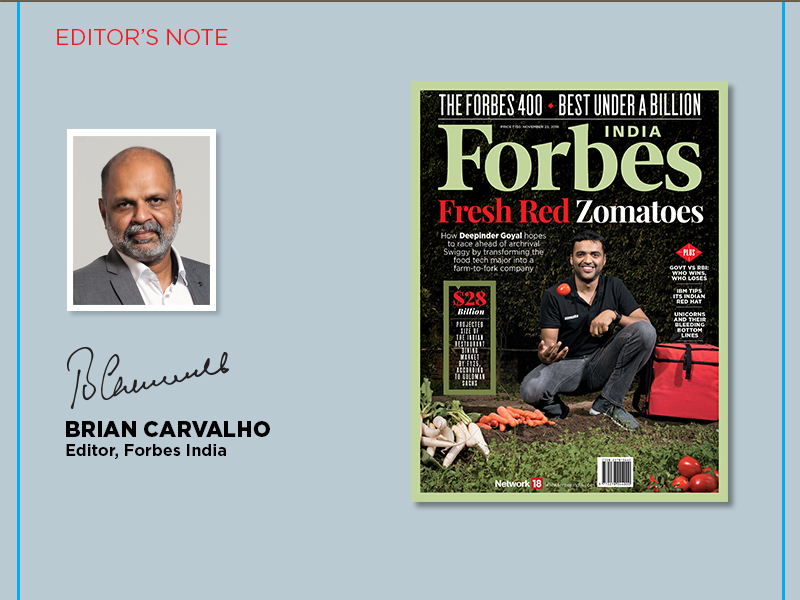 There are few words to describe confidence levels in the world’s fastest growing major economy; one of them could be bipolar. In Mumbai, the financial capital, the fear is that the September defaults by IL&FS will cascade across markets, taking a toll of non-banking finance companies (NBFCs), mutual funds that may have partly invested in the debt of the NBFCs, and companies that have parked their short-term money with these fund managers. Lending curbs on ‘weak’ banks and a squeeze on funds to micro, small & medium enterprises (MSMEs) had the government and the Reserve Bank of India (RBI) going head to head last fortnight, with the former not too chuffed with the regulator’s apparent overcautious approach. At the time of writing, the tension had ebbed, with the central bank doing its bit for liquidity by setting out to buy $400 billion worth of secondary market bonds. Also, a meeting between the PMO and top bankers was meant to bring back confidence among the latter to lend.

Now, for the other face of liquidity in India—albeit on a smaller sale—turn to the internet companies. More specifically, the unicorns, in which there has been a flurry of late-stage deals in 2018. An incisive research from YourStory, a startups platform, indicates that Series C deals in the January-September period were up by more than $1 billion (from $660 million to $1.76 billion). Series D, E and F deals also showed a smart spurt, indicating a maturing of the startup ecosystem. For one, the surge is not across the board and, for another, funding is being directed largely to those businesses that are leaders (No 1 or No 2) in their verticals. Think Oyo, Freshworks, Byju’s, BigBasket…

…And Swiggy. And Zomato.

The two bellwethers of the food tech sector have been slugging it out for some time now in the restaurant discovery and delivery business, burning millions of dollars every month as they woo consumers with discounts and go on a restaurant on-boarding binge. There is money to burn, what with the two collectively attracting funding of over $1 billion, with Naspers at the vanguard of Swiggy’s investors and Alibaba payments arm Ant Financial taking the lead at Zomato. Such backing allows the two to diversify their offerings to gain scale as well as de-risk the business model. Swiggy, for instance, has reportedly been considering deliveries of medicines and grocery.

Our cover story this fortnight by Rajiv Singh is on how Zomato  co-founder Deepinder Goyal is attempting to transform the food delivery platform into a farm-to-fork play that supplies restaurants with ‘clean’ and ‘fresh’ produce. It is indeed a huge opportunity, what with Goldman Sachs projecting that the restaurant dining market will be worth $28 billion by FY25, up from $13 billion currently.

Goyal’s is an exciting gambit, but a risky one, too. After all, sending meals to consumers is one thing, but delivering vegetables, meat and groceries to restaurants quite another. Goyal for his part will be assured that he’s got Ant Financial, which last month pumped $210 million into Zomato, firmly behind him.

It’s indeed all about liquidity and confidence, which brings us back to the RBI vs government flashpoint: who emerged better out of it? As Salil Panchal points out in his story, with elections around the corner, economic feel-good is an imperative. And therein lies the answer.