The alchemists at Sila Nano have their eyes on $31 billion—and growing—lithium-ion battery market. They just might get a nice piece of it 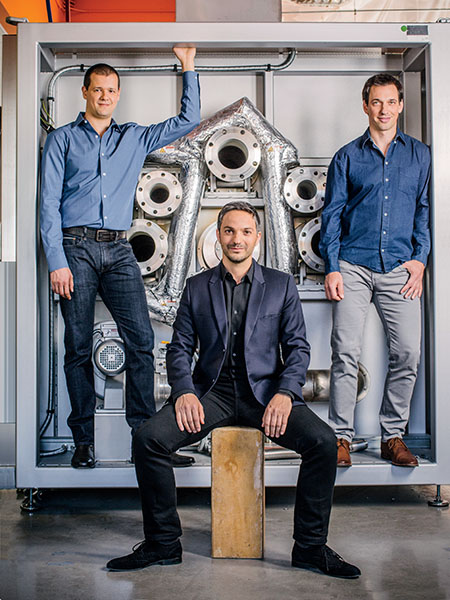 Walk through the entrance and open the door, however, and you won’t find racks of servers or a foosball table. Instead, you’ll see an industrial laboratory, complete with white-suited workers in a clean room. Two-litre furnaces are hooked up to gas lines, computers and chemistry instrumentation. Construction workers are tending a large, mysterious cylinder.

It’s all to perfect and then to commercialise a fine black powder in a glass jar resting in the hand of Gene Berdichevsky, 34, the company’s co-founder and chief executive. What, exactly, is this powder? That is a secret, although we can tell you that there is some silicon in it and that, if this substance does what it’s supposed to do, it will deliver a 40 percent boost to the energy performance of lithium-ion batteries.

“I think what Intel did for the ­semiconductor and personal computing industry in the ’90s is what we would want to enable in battery technologies,” Berdichevsky says grandly.

He has believers. Sila has raised more than $100 million from Samsung Ventures, Bessemer Venture Partners, In-Q-Tel and others. It is partnering with Hong Kong-based Amperex Technology to get its powder into cellphones and wearables like smartwatches as early as 2019. Sila also has a collaboration with BMW for potential use in its cars in the early 2020s.

There’s a lot at stake. Batteries that can pack more juice into a given space mean electric cars with a better range and cellphones that don’t have to be fed so often. Within a decade, research firm IDTechEx predicts, the market for just the car batteries will be $125 billion a year.

Sila has plenty of rivals. There are several dozen companies redesigning batteries or, like Sila, battery components, most of them startups but some of them giants like Toyota and vacuum maker Dyson. It’s possible that the battery tournament will ultimately be won by solid-state batteries, which eliminate the liquid electrolyte typical of today’s batteries. For now, though, that competitive threat is remote.

Sila has a less ambitious redesign of the lithium-ion battery under way. Its powder would simply replace the graphite in existing battery technology. “Sila has a significant lead just because of the fact that they’re going to have a drop-in manufacturing process,” says Sam Jaffe, managing director of Cairn Energy Research Advisors.

Sila’s powder beats graphite because silicon can hold significantly more lithium ions than graphite. Silicon is also cheaper than graphite. But there’s a catch. When silicon holds lithium ions, it swells fourfold, like a bellows. The shift in volume would drastically shorten the life span of the battery.

To avoid this problem, Sila builds a microscopic cage—a nanocomposite that’s silicon-dominant—that holds silicon with enough room for the expansion and contraction within. This ­allows lithium ions to come in and out of the anode without destroying the battery in the process.

The son of two electrical engineers-turned-computer programmers, Berdichevsky went to Stanford in 2001 as a mechanical-engineering major because, he says, “both of them wanted me to do computer science, so that was the one thing I wasn’t going to do”.

At Stanford he met Eerik Hantsoo (now vice president of equipment engineering at Sila), and the two of them built a two-person solar-powered car that raced from Chicago to Los Angeles in a 10-day competition. The journey would have taken a lot longer without the battery Berdichevsky helped design and build. In 2004 he dropped out of Stanford to become the seventh employee at Tesla.

It was while testing a variety of lithium-ion batteries for the Tesla Roadster that he noticed performance improvements in batteries were slowing down. The battery business needed a breakthrough.

Berdichevsky went back to Stanford and got a master’s in engineering in 2010, focusing on materials science. Later, as entrepreneur-in-residence at Sutter Hill Ventures, he began to think about how to build not just a better battery but also a better battery company. The efficient solution might be to make a component instead of the whole thing.

At Sutter Hill, Berdichevsky investigated many technologies, but the one that caught his eye came from Gleb Yushin, a Russian émigré running a ­nanotechnology lab at Georgia Tech. Along with Alex Jacobs, they founded Sila Nanotechnologies in Atlanta under the university’s aegis. Sila spent the next few years developing recipes for making anodes, testing 30,000 variations in areas like temperature and inputs. It moved to Alameda, California, in 2014.

Now it’s time to produce. Sila is in the midst of building several reactors for a new product line that it hopes will cook up enough powder annu­ally for 6 million amp-hours’ worth of batteries. That would be enough black magic for 2.3 million phone batteries. If Sila can deliver on its 40 percent performance promise, those batteries will pack 14 watt-hours of energy into a space that now contains 10. But, Berdichevsky concedes, “there’s just a huge amount of engineering and execution work that has to happen”.

The immediate market will be for batteries that go into wearables and phones. Sila intends to use the knowledge and revenues gained there to get into the much juicier business of car batteries. “The drop-in nature means we don’t have to build a billion-dollar gigafactory,” Berdichevsky says, referring to ambitious expansions by Tesla and some Chinese outfits. “We can work with the people who are going to do that anyway.”

Tweets by @forbesindia
As the club season kicks off in Europe, here's a look at some of the top transfers
Into the fire: The alarming effects of climate change