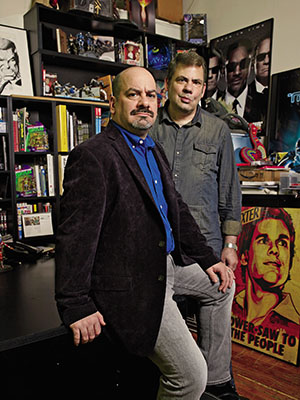 Growing up on the rough streets of 1970s New York City, Jef Gomez told stories to keep from getting bullied. “I was not a ﬁghter,” says Gomez, now the CEO of New York City-based consulting ﬁrm Starlight Runner Entertainment. “I wanted to be a paleontologist.”

So he hung out on the fringes of a group of tough guys and one by one lured them into playing Dungeons & Dragons, the tabletop game where participants roll dice and talk their way through a narrative adventure. “I would talk to these guys about their interests and then weave elements of their personalities into the game,” says Gomez. “We all want to be part of a big story, so they kept coming  back... and soon enough they were protecting me in the schoolyard.”

Thirty years later Gomez, now 49, is still telling stories for a living. When ﬁlm directors like Avatar’s James Cameron bring imaginary worlds to life in the movies, they hire Starlight Runner to create a larger universe of characters and settings that keep the fantasy consistent across multiple forms of media, including comic books, websites and videogames.

It’s called ‘transmedia’ storytelling, and Gomez’s clients at Hollywood studios, including Sony, Walt Disney and Fox, already consider it an essential tool for reaching audiences in a fractured media landscape. But increasingly, non-media businesses are working with Starlight Runner to create storylines about their products, too.

“Jef inspires me every time we get together,” says Jonathan Mildenhall, vice president of global advertising strategy at Coca-Cola. In 2006 he hired Starlight Runner to consult on a 60-second commercial called ‘Happiness Factory’, which depicted tiny creatures living inside a Coke machine. “It was an ad, and only as good as the media dollars that we put behind it,” says Mildenhall. “But transmedia helped us understand how the story arc and the narrative of the Happiness Factory could evolve over time and how it could be used through different channels.”

Working in consultation with the commercial’s production company, Coca-Cola’s internal marketing team and ad agency Wieden+Kennedy, Starlight Runner spent a year writing the Happiness Factory ‘bible’, a book that describes the entire world inside the vending machine, from geographic regions to the names and motivations of individual characters. Once they had such a wealth of story to work with, Coca-Cola and its partners built the Happiness Factory into a franchise that includes videogames, apps and social networking campaigns, as well as TV, radio, online, outdoor and mobile ads. After Coca-Cola rolled out the transmedia campaign it saw a 4 percent spike in global sales, according to the company.

Gomez co-founded Starlight Runner in 2000 with Executive Vice President Mark Pensavalle, a childhood friend who left the book publishing industry after becoming frustrated with its lack of innovation. Starlight Runner initially set out to develop software that would allow other companies to tell stories on the web, but it lost its venture funding after the dotcom bubble burst, so the company retooled into a consulting ﬁrm. In 2003 it helped toymaker Mattel co-ordinate stories for the 35th anniversary of its Hot Wheels cars across comic books, cartoons, games and toys.

More major entertainment brands followed on the success of that effort, including Disney’s Pirates of the Caribbean, Hasbro’s Transformers and Microsoft’s Halo. Just last month Starlight Runner announced that it’s working with the cable network Nickelodeon on a transmedia campaign for the recently rebooted Teenage Mutant Ninja Turtles animated series. The work is lucrative. The average client pays $1 million to $2 million for a typical transmedia bible. Starlight Runner is proﬁtable, with revenues of around $10 million and growing.

Movies and TV shows are Starlight Runner’s bread and butter, but the company’s 10 full-time staffers and two dozen freelancers increasingly work on projects for non-entertainment brands. Pensavalle estimates that 25 percent of the ﬁrm’s clients come from industries including household products and snack foods. This year Pepperidge Farm will launch a new advertising campaign for its Goldﬁsh crackers brand based on stories by Starlight Runner that feature the cheese-ﬂavoured ﬁshes’ personalities and world.

The next big thing in transmedia storytelling, according to Gomez and Pensavalle: Creating ﬁction for their clients’ internal marketing use. Think of characters and tales that help tell the story of a company’s founders or illustrate core goals and values to employees. “When you establish a narrative, it’s so much more powerful than a mission statement,” says Gomez. “It helps the company fall back in love with their own product and remember what they’re about.”

Tweets by @forbes_india
The Consumer Index: Is There a Slowdown?
Private Equity Giant KKR Goes Gentle