Satyanarayan Nuwal's Solar Industries' shares have been a strong performer on the Bombay Stock Exchange for the last five years, up fivefold to a recent price around Rs1,000 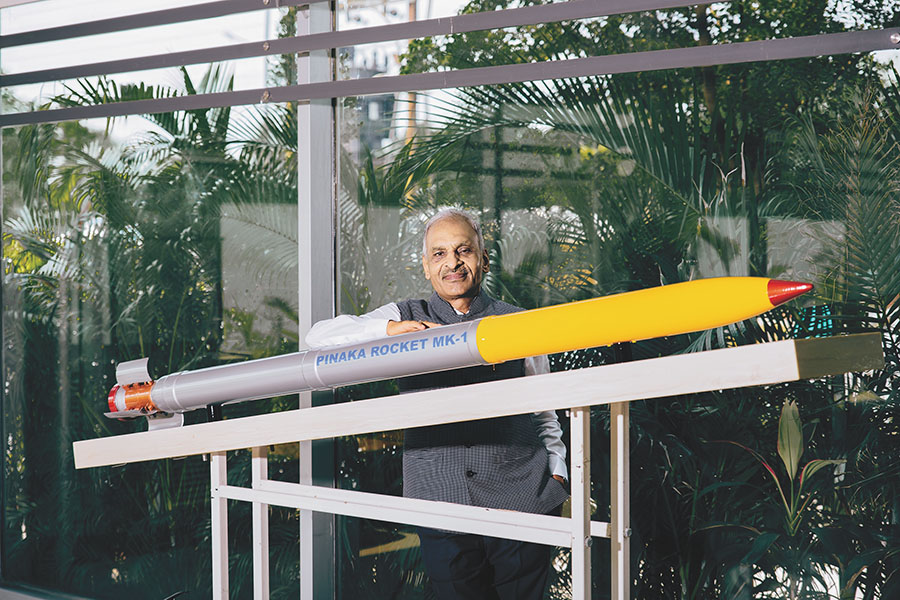 Nuwal’s company featured in Forbes Asia’s list of 200 Best Under A Billion companies in 2019
Image: Karan Nevatia for Forbes Asia

Satyanarayan Nuwal has accomplished many things in his long career, among them creating India’s largest maker of explosives (by revenue) and the first private supplier of explosives for warheads. He has also hit another milestone, as the 73 percent stake that he and his family hold in Solar Industries India, the company he founded in 1983, rose to be worth $1 billion.

Solar Industries’ shares have been a strong performer on the Bombay Stock Exchange for the last five years, up fivefold to a recent price around ₹1,000. The company now sports a market capitalisation of $1.4 billion. The company also featured in Forbes Asia’s list of 200 Best Under A Billion companies in 2019 and previously in 2010. Solar sells its products in 51 countries and has four overseas factories in Nigeria, South Africa, Turkey and Zambia. Two more are expected to come online in Australia and Ghana. Over the past year, Solar’s shares have risen by 9 percent on the back of a 28 percent increase in revenue to ₹25 billion ($354 million) in the year ending in March, and a 19 percent rise in net profit to ₹2.6 billion.

A native of a village in Rajasthan, Nuwal dropped out of school after class 10. He set up his first business to make ink in 1970 at the age of 18. It failed and he spent the next several years trying his hand at different ventures, including a leasing business and a transport company. All failed. In the late 1970s he moved to Maharashtra to work with a relative, sleeping in a railway station because he couldn’t afford an apartment.

He finally got a break a few months later when he got a licence to trade explosives, and a warehouse to store them, paying a monthly fee of ₹1,000 to the licence holder. He spent the next several years supplying explosives to state-owned coal mines and as a consignment agent for chemical company ICI. Yet things were rough, money was tight, and Nuwal’s son Manish recalls his mother mortgaging her jewellery to raise funds to survive.

By the mid-1990s, competition had picked up as several companies had come in as consignment agents. With margins getting squeezed, Nuwal decided it was time to go beyond trading and start manufacturing explosives. In 1996, he started modestly, first as an explosives trading business and a year later set up a small plant to manufacture explosives, selling them to clients in mining, construction and infrastructure. His single biggest client over the years has been India’s state-controlled Coal India. 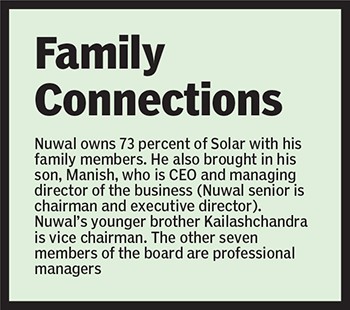 By 2006, Nuwal was ready to IPO, and used the money for expansion, building 13 plants in India. In 2010, Solar was the first private company to get a licence from the Indian government to make explosives for warheads for India’s defence forces. “The government had never thought that the private sector in India could produce ammunition,” says Nuwal. “But I was very confident.”

In the past year, Solar has received orders to make propellants for the Akash missile, a medium-range surface-to-air missile, and the Pinaka, a multiple rocket launcher, used by the country’s defence forces, as well as for pyrotechnics, which help initiate the explosion, and igniters, which provide the spark for the ammunition. It has also received a trial order for propellants for the BrahMos cruise missile, a medium-range missile that can be fired from submarines, ships, aircraft or land. Its current order book totals ₹4 billion. In the latest financial year, defence-related sales accounted for about ₹1.7 billion, a four-fold increase from the previous year. Although still only about 7 percent of total revenues, the defence business is Solar’s fastest-growing segment.

Nuwal firmly believes that India can cut its dependence on imported defence equipment. He wants  to convince the government that the private sector is capable of providing quality ammunition at a competitive price and in a timely manner. For the ten years to 2018, India has ranked as either the world’s largest or second-largest importer of defence equipment by expenditure, as ranked by the Stockholm International Peace Research Institute. Last year India spent $66.5 billion on military expenses.

The majority of the defence equipment that India gets locally supplied comes from nine state-owned companies and 40 ordinance factories under the ministry of defence. Nuwal would like to alter this system. “I decided, even if we achieve nothing else [in terms of business from the government], we need to change their mindset and show that India’s private sector is capable of providing quality products at a reasonable price,” says Nuwal.

The government had never thought that the private sector in India could produce ammunition.”

It was not easy—he had to set up new facilities and hire experts without any guarantee of winning a government contract. He started with an investment of about ₹600 million in the facilities before receiving his first order. “They’ve got excellent facilities and found the right skills in good people,” says KV Kuber, director, aerospace and defence at EY in India. “They’ve created indigenous technology.”

With Solar paving the way, a handful of other private companies are now entering the sector. But Solar has first-mover advantage, says Santosh Yellapu, a defence analyst at Mumbai-based IndiaNivesh Securities. “They are well prepared to get all approvals. They know how the defence ecosystem works, how the files move from one table to the next,” he says. When asked about the prospects for the defence business, Nuwal says simply: “There is no reason for us to be stopped.”