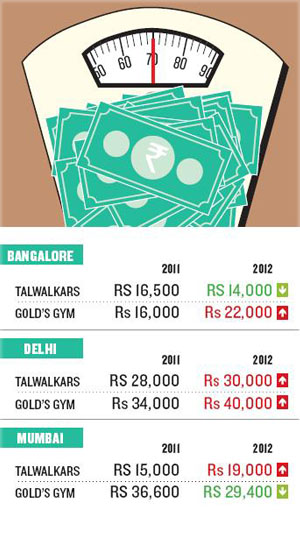 Keeping fit has become an expensive proposition for urban Indians as membership fees at gyms have increased across cities and chains. Between Delhi, Mumbai and Bangalore, the capital city turns out to be the costliest in which to join a gym.

Discounts remain the most popular way to attract customers. The maximum number of sign-ups takes place in August, the beginning of the discount season. It was a trend started by Talwalkars that most other chains have followed.

But getting new members is not the only concern for some gyms; they are getting serious about showing results. This has led to a move to create communities within a gym that will make members stick to their programmes.

And then there is the other extreme as well. The managing director of a gym chain in Bangalore said mothers come with their daughters and say, “I want my daughter to look like Kareena Kapoor.” They were refused membership.