How to restart the manufacturing, MSME sectors 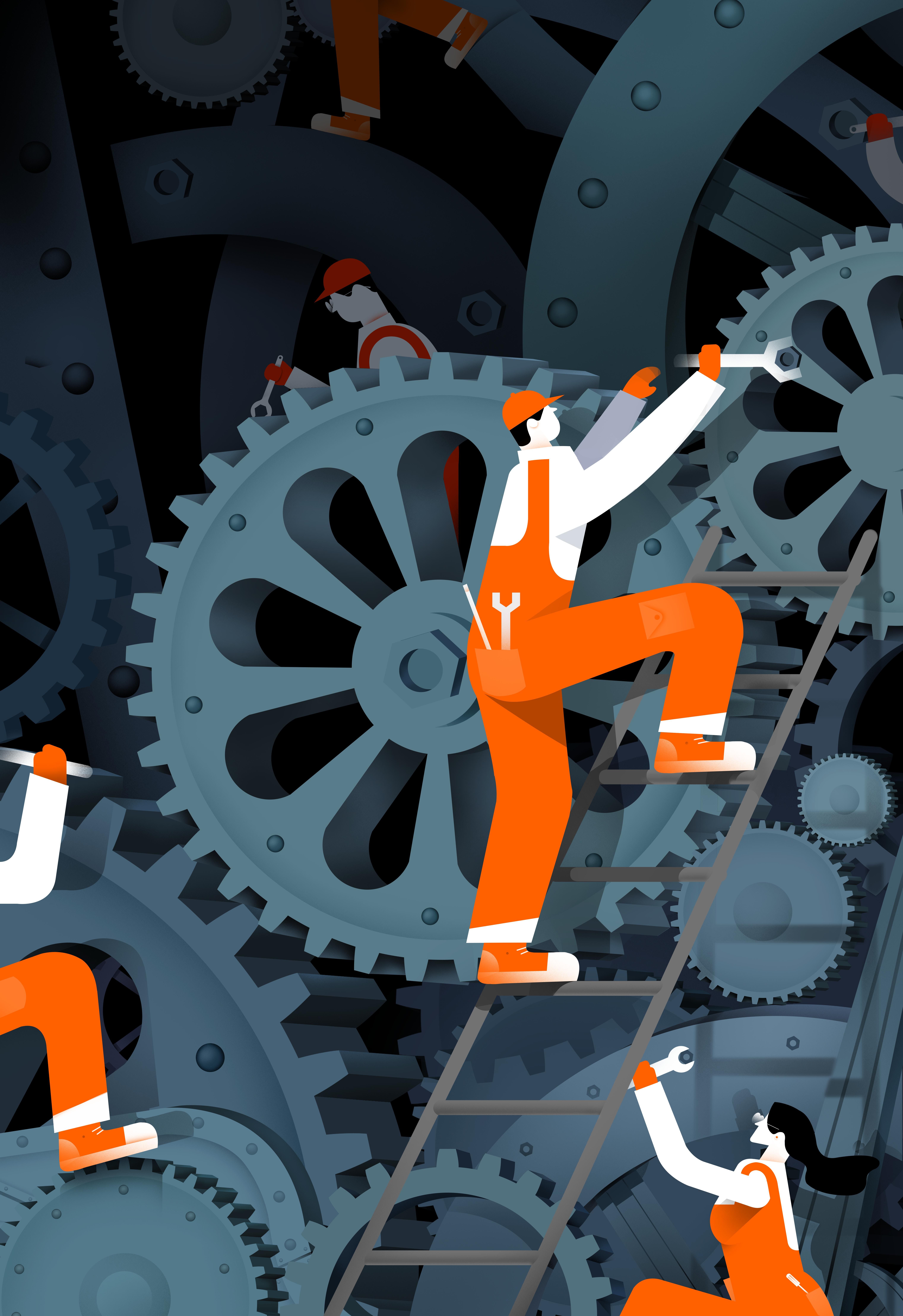 As the clock strikes 8 in the morning, the blare of the hooter is a common feature in factories across industrial townships. But with the nationwide lockdown, the hooter has fallen silent as factories across the country have come to a standstill. As have the cash flows.

The coronavirus outbreak couldn’t have hit the country at a worse time. India’s GDP decelerated to its lowest in over six years during the third quarter of 2019-20. In January, the International Monetary Fund (IMF) cut its global outlook citing slowing growth and India contributed a lion’s share—80 percent—to the downward revision. Now, the impact of the lockdown is only set to make things worse.  “There is not an iota of doubt that this kind of lockdown will have a profound impact. The ones that are less affected are food, fertiliser, information technology or those in which work can happen from home, but sectors like steel, infrastructure, cement have come to a complete halt,” says Ravi Uppal, chairman and managing director at Steel Infra Solutions Pvt Ltd (SISCOL).  Uppal, who has previously headed companies like ABB India and Larsen & Toubro, now runs five factories around Bhilai, an industrial township in Chattisgarh—known as the Indian steel manufacturing belt. He believes that the cash flow crunch will adversely kickstart a chain reaction. “There is no activity after the first 10 days of March, we are saddled with inventory and the whole value is locked in. It is the same with everyone; if you don’t supply, you don’t get paid, if you don’t get paid, you can’t pay your vendors,” says Uppal. Ratings agency Moody’s investor service, on April 15 placed Tata Steel Ltd’s Ba2 corporate family rating under review for downgrade and has downgraded Tata Steel’s wholly owned subsidiary Tata Steel UK Holding Ltd’s rating to B3 from B2 as well as placed it under review for further downgrade. The report says given the market situation, an upgrade in ratings is unlikely in the near term. 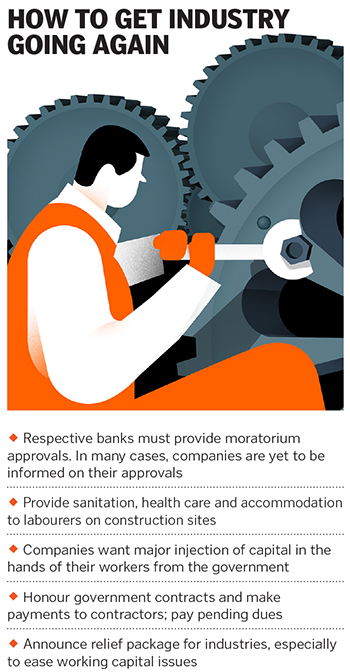 Back in Mumbai, Virendra Mhaiskar, chairman and managing director of highway construction firm IRB Infrastructure, says, “As a result of the lockdown, our construction of highway projects has come to a standstill and toll collections have been suspended by the government, but we have a regulated concession agreement with NHAI.” It is also seeking relief under force majeure of concession agreements. Mhaiskar cites the cash compensation paid by NHAI during demonetisation in 2016 when activity had come to a standstill. “It will be the same compensation is my guess. As an industry, it can calculate the average transactions till lockdown and cash compensate those losses,” he adds. IRB Infrastructure, which also has a listed infrastructure investment trust (InvIT), is hoping to restart construction from April 20 by writing to the district collectors for permission for commencement of work. It says  toll collections won’t start anytime soon. Mhaiskar believes once the lockdown is lifted, activity should start within 15-30 days, but it will take time to repair the working capital cycle of infrastructure companies. “Cash flow is being preserved and used for better work. The key demand we have made is that we require a loan moratorium for one more quarter as our working capital cycle is now stretched,” he says. While road companies may get compensated by the government, other sectors don’t have such fallbacks. Down south, airports to power to roads developer GVK Group is grappling with various challenges. On March 25, the road ministry exempted toll collections across the country affecting toll-road companies, including GVK. The company is also facing revenue compression as airports are closed. The group continues to operate two power projects—one in Uttarakhand, which supplies power to Uttar Pradesh, and the other in Punjab while its other two gas-based power plants are unable to fire due to unavailability of gas. “It will take enough and more to bring things back to normal and we can only wait and watch. Everyone can’t work from home (WFH) as in these sectors there is limited amount of WFH, where we are making presentations for banks, NHAI and AAI asking for moratorium,” says A Isaac George, director and chief financial officer at GVK. While cash flows have dried up for almost every core infrastructure firm, some of the payments for operations and maintenance are mandatory to be paid. “The toll road is a cash-and-carry business… while it is not generating revenues, there are still fixed expenses that need to be met, including payment of wages. There is a working capital sanction for airports and we will dip into it,” George explains. The company is trying to structure salaries for its senior staff with a deferral of payments, while junior employees will be kept out of any payment delays. According to an IMF note on April 16, the global economy is expected to contract in 2020 by 3 percent, a downgrade of 6.3 percentage points from January and a major revision over a short period. This makes the Great Lockdown the worst recession since the Great Depression, and far worse than the 2008 global financial crisis. Growth in Asia is expected to stall to 0 percent in 2020. Three other sectors that have been heavily impacted are automobiles and auto components, real estate, and small and medium enterprises. Real estate has been down in the dumps since the fall of shadow banking firm ILFS in 2018, and residential real estate-focussed developers are now facing the challenge of negligible sales. With employers seeking a downward revision of rents, the commercial property sector, too, is set to see lease rentals fall over the next few quarters. In a lot of cases, retailers are calling for force majeure in their contracts as they are hit hard by lack of sales. While in India, malls had seen their fair share of rental compression during the 2008 crisis, contracts have evolved over the decade in the form of minimum guarantees, rent sharing agreements and relaxed common area maintenance charges.  “The current crisis is in a way revisiting the financial crisis, but during that time there was no shutdown and it had to be dealt with on a financial basis. It is a different ball game now because you have no topline but certain fixed costs that you have to pay, so we all have to work together to find a solution. It can’t be a one-sided approach,” says Manoj K Agarwal, chief executive officer at Viviana Mall in Thane.   Agarwal adds that these negotiations can’t happen over phone. He says if economic activity restarts in 2-3 months, the situation will not be as gloomy. 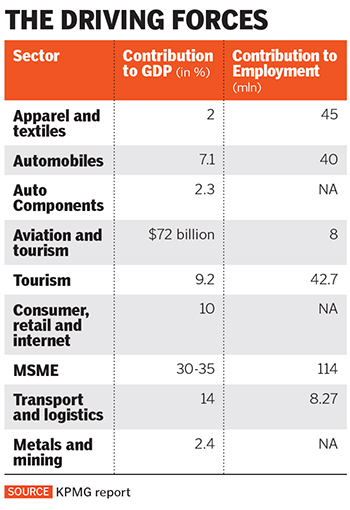 The automobiles and auto components sector, which contributes nearly 9.4 percent to the GDP, has been witnessing a steady fall in sales over the last year and the pandemic is now bringing it to its knees. “The mortality rate of a lot of MSMEs in the automotive sector will be high as there is a lack of working capital. A lot of effort is required by banks to start giving capital to these sectors and in this backdrop, recovery will be a huge challenge,” says Uppal.  Auto sales for March were down by 50 percent and a lot of auto original equipment manufacturers will be forced to delay launches as consumers are expected to cut down on discretionary expenses. Sunil Kant Munjal, author of The Making of Hero, says this is the second time since Emergency that the Hero Group (the Hero Cycles business) had shut down. “Our culture remains the same across group companies—we are focussed on planning and forecasting, and the teams have a high ability to execute. Two weeks before the shutdown, we started having half the people work from home. So we had set up process and protocols to WFH and literally three days before the shutdown, I had written a letter to all our team members telling them to work from home. We were a little better prepared as we are doing morning calls, afternoon meetings and evening reviews in these times.” One of the biggest segments in India is that of MSMEs, which employs nearly 114 million people and contributes nearly 30-35 percent of the GDP. Forty-nine percent of the MSMEs are in rural areas and the rest in urban localities. A study by the All India Manufacturers’ Organisation estimates that about a quarter of the MSMEs in India will face closure if the lockdown due to COVID- 19 goes beyond four weeks. This figure is estimated to touch a whopping 43 percent if the situation extends beyond eight weeks. As Saurabh Mukherjea of Marcellus Investment Group points out, 91 percent of Indians work in set-ups of less than 10 employees and with an operating margin of nearly 10 percent. “If they have to shut down for one month of the year, their margin for the entire year is wiped out. So they will cut costs and try to survive,” he says. Mukherjea also believes that sectors like real estate, tourism, leisure and hospitality, which are highly leveraged and are witnessing stress in cash flow, will face challenges. But this situation will also work as a cleanser for companies facing existential challenges. With the lockdown, core infrastructure and heavy industries firms are also finding it difficult to communicate with their employees in far-flung areas. With daily wage labourers rushing back home or stranded at borders as they try to make their way home, India is set to face labour challenges in the coming months.  Until then, it is imperative for the government to step in. “As governments in the US, Germany and France have extended support, India too needs to think about providing cash support to the manufacturing sector. The wages in the manufacturing sector are around 10-12 percent of the costs and direct cash support is needed for payment to workers,” says Uppal.

Tweets by @forbes_india
Can antibody tests help end the Coronavirus Pandemic?
Michelle Obama's memoir 'Becoming' will be a Netflix documentary