Airbnb's loss approaches the $5.2 billion lost by Uber in its first full quarter as a public company and renewed questions about whether unprofitable tech startups can turn a profit 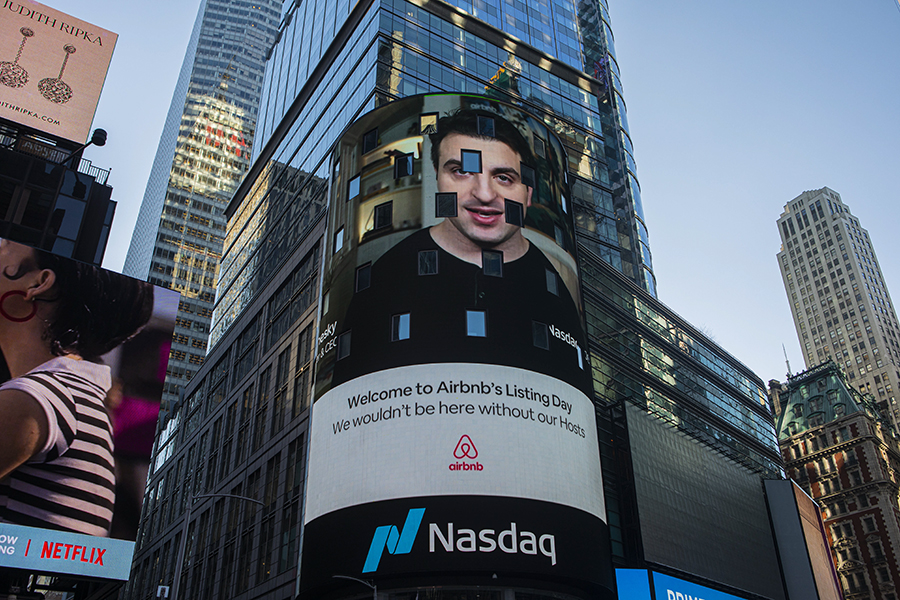 An image of Brian Chesky, the chief executive Airbnb, on the Nasdaq screen the day the company's shares began trading in Times Square in New York, Dec. 10, 2020. Airbnb, which has faced sky-high expectations since its blockbuster initial public offering in December, posted declining revenue and a whopping $3.9 billion loss on Thursday in its first earnings report as a publicly traded company.
Image: Hiroko Masuike/The New York Times

Airbnb, which has faced sky-high expectations since its blockbuster initial public offering in December, posted declining revenue and a whopping $3.9 billion loss Thursday in its first earnings report as a publicly traded company. The company brought in $859 million in revenue in the last three months of the year, down 22% from a year earlier. Its loss was driven by $2.8 billion in costs associated with stock-based compensation related to its IPO, as well as an $827 million accounting adjustment for an emergency loan it took out last year to weather the pandemic. Airbnb’s loss approaches the $5.2 billion lost by Uber in its first full quarter as a public company and renewed questions about whether unprofitable tech startups can turn a profit. Although most money-losing tech companies say that they are spending money to fuel fast growth, Airbnb’s shrinking revenue makes that argument a harder sell. Airbnb presented its declining revenue as a show of resilience in a year when travel came to a standstill because of the pandemic. Last spring, the company lost $1 billion in bookings, laid off staff and raised emergency funding in response to lockdowns and other restrictions. By the summer, bookings had bounced back, though not enough to make up for the hole in revenue. In December, the company went public and raised $3.5 billion, valuing it at more than $100 billion. Since then, its valuation has risen as high as $120 billion on investor expectations that a fast vaccine rollout would spur a new boom in travel. Ron Josey, an analyst with JMP Securities, said Airbnb’s revenue was higher than anticipated. That showed the company was ready to take advantage when people begin traveling again. “Nobody knows how quickly demand comes back,” he said, but when it does, “Airbnb is a share gainer.” Airbnb’s stock rose 2% in after-hours trading. Yet even if travel bounces back this year, Airbnb faces challenges. Its hosts, who provide its inventory in the form of property listings, have become increasingly frustrated with the company and are seeking to list their rentals independently. Its problems with “party houses” worsened in the pandemic and the company has rushed out new rules. And regulators around the world continue to scrutinize the “Airbnb effect” of turning housing stock in residential areas into hotels. In a call with analysts, Brian Chesky, Airbnb’s chief executive, said the company’s priority was to prepare for a rebound in travel with efforts including marketing, recruiting hosts and improving its customer service. “Travel is coming back,” he said. “We believe people are yearning for what’s been taken away from them.”