Heavy government spending on new rail lines, highways and other projects is keeping the economy afloat right now but may not be sustainable through next year

By Keith Bradsher and Alexandra Stevenson 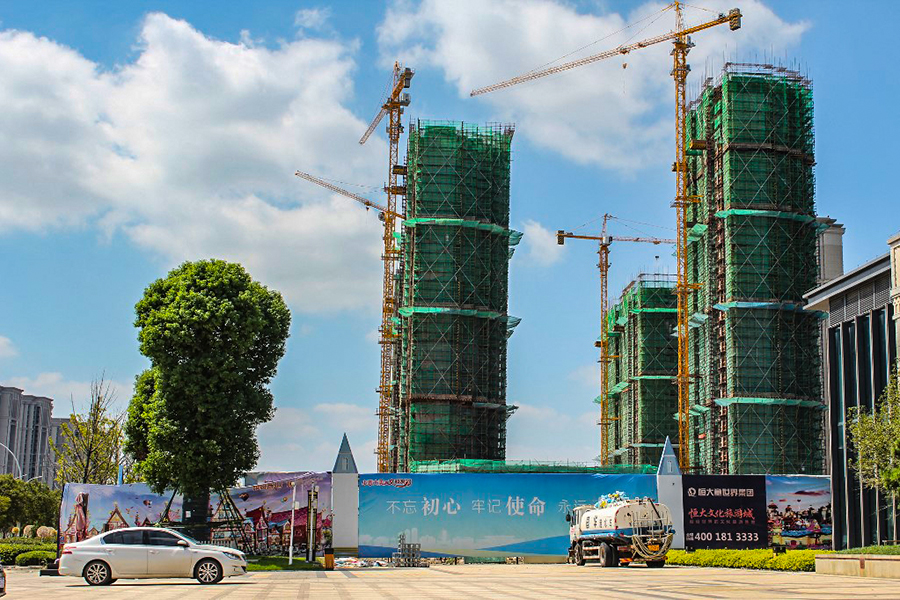 BEIJING — Global markets have watched anxiously as a huge and deeply indebted Chinese property company flirts with default, fearing that any collapse could ripple through the international financial system. China Evergrande Group, the developer, on Wednesday said it reached a deal that might give it some breathing room in the face of a bond payment due the next day. But that murky arrangement does not address the broader threat for Beijing’s top leaders and the global economic outlook: China’s growth is slowing, and the government may have to work harder to rekindle it. Retail sales were much weaker than expected last month in China, led by slow car sales. Industrial production has slackened, particularly for large freight trucks. And developers sharply reduced new housing projects over the summer, while rushing to finish the projects they had already started.  Heavy government spending on new rail lines, highways and other projects is keeping the economy afloat right now but may not be sustainable through next year.

Markets have been riveted by the idea that Evergrande could be China’s “Lehman moment,” a reference to the collapse of the Lehman Bros. investment bank back in 2008 that kicked off the global financial crisis. While many economists in China are pouring cold water over the idea of potential financial contagion, they are pointing to the broad weakness in China’s property market, a mainstay of the economy, and other long-term threats. “This is not a Lehman moment. This is too sensational,” said Xu Sitao, an economist in the Beijing office of Deloitte. “The question is next year.” With Evergrande, it is not entirely clear what will happen Thursday, when bond interest payments are due. On Wednesday, it said in a vaguely worded stock market filing that it had reached an arrangement with Chinese investors to make a payment due the following day, without offering details. It did not mention an $83.5 million payment due Thursday to foreign bondholders. Bloomberg News, citing bond documents, said the company has a 30-day grace period before a missed payment becomes a default. Evergrande did not respond to questions. Chinese policymakers could conceivably step in and rescue Evergrande. But that would run contrary to their efforts to get companies to borrow less and to take some of the steam out of the property market, where apartments for purchase are increasingly unaffordable for many Chinese families in a number of markets. People familiar with Chinese economic policymaking say that big companies often carry a lot of collateral on their books, so officials believe lenders will not get fully burned by a collapse. They also cite the tools Beijing has to unwind debts gradually and limit financial disruptions, such as its control of the banking system. Letting Evergrande collapse quickly, on the other hand, risks a broad fall in apartment prices or other potentially unforeseeable shocks to the financial system. Chinese officials have taken short-term measures to shore up confidence. The central bank announced Wednesday morning that it had temporarily injected about $18.6 billion in credit markets, part of a broader effort in recent days to make sure that ample cash is available. Real estate sales were slowing even before the latest difficulties, in part because of Beijing’s cool-down efforts, depriving Evergrande and other property developers of the cash they need to finish other projects. Sales dropped 7.1% by value in July from a year earlier and 18.7% in August from the same month last year. Overcapacity in many industrial sectors, coupled with a faltering construction sector, have prompted economists to predict slower growth. Bank of America lowered on Tuesday its forecast for China’s economic growth next year to 5.3% from a previous forecast of 6.2%. Growth more than 5% is still strong by most standards. But it would represent a much weaker showing than this year, which many economists project will total 8% or higher. It would be considerably slower than the official growth rates China has posted in recent years. Other questions hovering right now over the Chinese economy can be seen in a handful of measures that might at first glance seem to have little to do with the real estate industry, bond prices or Evergrande’s 1.6 million unfinished apartments. The measures gauge the production and sale of heavy-duty freight trucks. Construction companies and manufacturers all over the world tend to stop buying large trucks when they see trouble ahead. Alan Greenspan, the former chair of the Federal Reserve, used to cite the strength of the freight truck manufacturing industry as one of his favorite predictors of the future health of the U.S. economy. The China Association of Automobile Manufacturers disclosed earlier this month that heavy truck production and heavy truck sales plummeted by nearly half in August compared to the same month last year. Excluding statistical quirks caused by the timing of the Lunar New Year holiday, it was the worst performance for both heavy truck indicators since the spring of 2015, when China was struggling to emerge from a botched currency devaluation. The nosedive in freight truck production and sales is about much more than lost economic confidence, however. It also shows how China’s policies over the past few years temporarily inflated demand and produced severe overcapacity. Stringent new standards for air pollution took effect for freight trucks manufactured beginning July 1. Stricter safety standards are also being phased in, such as a requirement that onboard software and sensors warn drivers when they start to drift out of their traffic lanes. Domestic truck manufacturers expanded their factories last year to build as many trucks as they could before the tougher rules took effect. China’s freight truck manufacturing capacity has ballooned to 1.6 million trucks a year in a market where long-term sales estimates are far fewer than 1 million trucks a year. Truck dealerships across China are now clogged with rows of unsold trucks. While China faces broad overcapacity and other worries, many economists in China still express more confidence than economists elsewhere that the country can weather its troubles. Economists in China note that the Chinese government has more ability than most to set interest rates and control large movements of money in and out of the country. “China,” said Xu, of Deloitte, “still has a lot of tools.”

Tweets by @forbesindia
Google antitrust lawsuit: What do India and Taiwan have in common?
How parents' love for their daughter is changing online extracurricular learning