Goliaths of real estate are winning the pandemic economy

Real estate was expected to lose favour in the Covid-19 world, instead established brands and large players with better recall, online presence, and often those that are listed on the bourses are finding more takers than smaller players 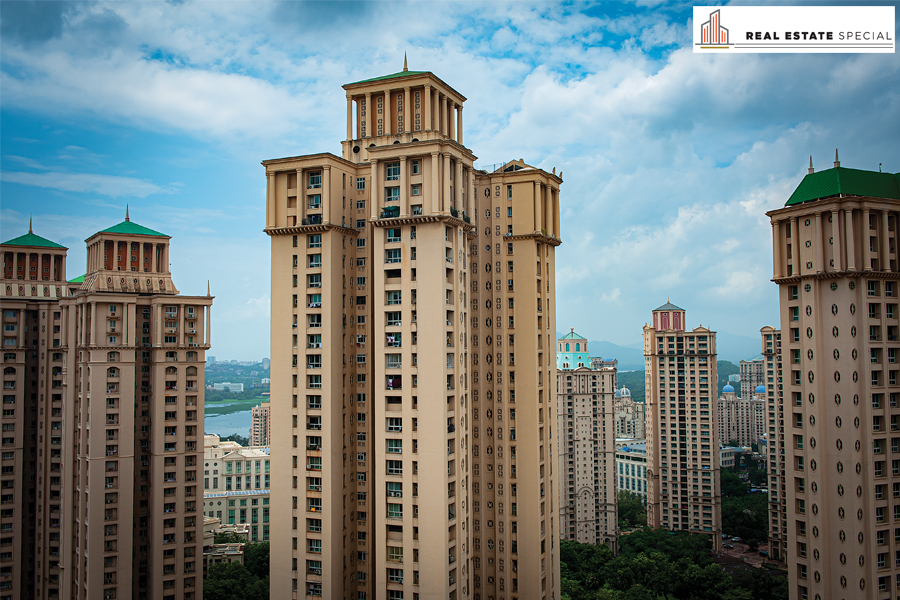 In the months leading up to the pandemic, buyers had gone short on residential real estate. Deals were going abegging and prices hadn’t risen for years. Most large developers had to deal with an inventory pile-up.
While conventional wisdom would have argued for a worsening of demand post pandemic, the real estate market has, instead, bisected. Large organised developers have seen their share of the pie increase, while smaller players with lesser access to capital have struggled.
“There is definitely more trust and faith in larger players who have been doing quality work,” says Niranjan Hiranandani, managing director of the Hiranandani Group. An important reason for this has been the access to finance that larger developers have. In the past, residential real estate relied on pre-sales to raise money that financed construction. Post the implementation of the Real Estate (Regulation and Development) Act, a key financing tool for smaller developers has been disallowed.

While this was a trend that existed even before the pandemic, it has accelerated since, says Hiranandani. As people look for larger residences and start their property search online, it is the better-known names, with immediate brand recall, who have benefited.
Data backs up this claim. According to research by Anarock, a real estate services firm, leading listed real estate developers have seen their market share increase from 6 percent in FY17 to 22 percent in FY21. Names in this category include Prestige, Sobha, Puravankara, Kolte-Patil, Sunteck, DLF and Godrej Properties, among others. Leading unlisted companies—Piramal Realty, ATS, Wadhwa, Runwal—saw their share rise from 11 percent to 18 percent in the same period. Unbranded developers who had an 83 percent share in 2017 are now down to 60 percent.
According to Anarock, out of 93,140 units sold in the first three quarters of FY21, listed players accounted for 21.23 million sq ft or 2 percent more when compared to the same period in FY20. “While working on this survey, we spoke to about 8,000 customers and the feedback was that while they were willing to buy under-construction properties from a larger developer, they were unwilling to do so from a smaller player, even at a discount,” says Prashant Thakur, director and head of research at Anarock.
As a result of these buyer preferences, the real estate market, which has been consolidating for the last five years, will likely move to a stage where there will be about half a dozen developers active in each city. Some will be across cities, but it is clear that the days of national developers are over. Companies like DLF and Godrej Properties that had national ambitions have pulled back to their home markets. It also has implications for their profitability and balance sheets—both are likely to improve in the years ahead.
As real estate sales slowed post 2013, most developers held on to pricing. This resulted in the sales slowdown continuing and smaller players with lesser access to finance getting squeezed. “In a scenario where developers could not develop on time, there was a trust deficit,” says Shveta Jain, managing director, residential services, Savills India. “First-time home buyers, where the demand is, were not keen on buying homes under construction.”
Gaining Financial Strength
In the 2019 Forbes India Real Estate Special, JC Sharma, managing director at Sobha, had said, “We thought the slowdown that began in 2013 was a two-three-year phenomena.” But he’d also pointed out that he saw this long spell of slow sales and stagnant prices as being good for larger players, as they had the financial muscle to weather them. There was also the triple blow of the implementation of the Goods & Services Tax, the Real Estate Regulation and Development Act, and demonetisation. Sobha saw a 6 percent increase in sale area to 1.13 million sq ft, at a value of Rs 888 crore, up by 22 percent. The company has not released numbers for Q4FY21.
The increase in sales is mirrored across other large developers. Take Macrotech Developers, also known as Lodha. It saw a 116 percent increase in sale area to 1.8 million sq ft in Q4FY21, even as sales for the full year were down by 10 percent to 5.1 million sq ft. Collections were up by 10 percent in Q4 to Rs 2,089 crore.
Godrej Properties, which in the last five years has scaled back operations to focus on Delhi-NCR, Mumbai, Pune and Bengaluru, saw its highest ever bookings at Rs 6,725 crore in FY21, with area sold rising by 23 percent to 10.8 million sq ft. Brigade Enterprises also saw sales rise by 8 percent in FY21 to 4.6 million sq ft. The increase in sales, “has been on account of better balance sheets and also due to our ability to deliver over the last few years”, says MR Jaishankar, chairman and managing director of the Brigade Group. 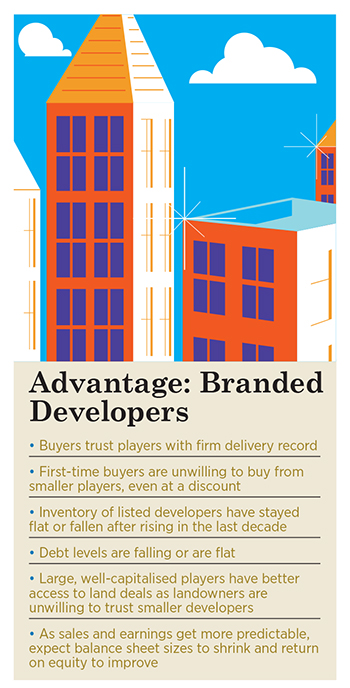 This increase has partly been powered by the fact that several developers have exited their land parcels and sold them to their larger counterparts. There are also joint development agreements where the developer is only responsible for sales and construction while the land is owned by someone else. Sales are, however, booked in the branded developers’ name.
A fall or stagnation in inventories has been another consequence of this trend. At DLF, the country’s most valuable developer, inventories fell from Rs 22,486 crore in March 2020 to Rs 21,832 crore in September 2020. At Sunteck, they were down from Rs 2,720 crore to Rs 2,642 crore in the same period. At Prestige Estates, the number fell from Rs 11,375 crore in March 2020 to Rs 9,580 crore in March 2021.
Longer-term trends for large developers look even more promising. At Prestige Estates, inventories have fallen by 37 percent in the last two years. In contrast, in the last decade, they rose by 571 percent. At DLF, while inventories have stayed flat in the last 18 months, they rose by 99 percent in the previous decade. And at Sunteck, too, they stayed flat in the last 18 months, but rose by 198 percent over the last decade.
The improvement in balance sheets is likely to result in three key trends over the next five years. First, a fall in the cost of funds. Large developers are now able to borrow at rates that are much lower than the unorganised sector. At Sobha, the cost of funds stands at 9.17 percent in Q3FY21. Compare this to smaller players who routinely borrow at 15 to 18 percent, and the difference in interest costs is stark.
Second, lower debt numbers. All listed developers surveyed showed a decline in, or flat, debt numbers over the last year, even though in the last decade they had risen sharply. Lower debt numbers combined with higher sales could see them report significant operating leverage over the next five years. They all have at least a year’s worth of sales in inventory. With land costs accounted for, these sales will have a disproportionate impact on the bottomline.
Third, better access to land deals. Landowners, having burnt their fingers with smaller developers, are now willing to deal with only well-known names. On their part, developers can dictate terms that allow them to share revenue and profits only once sales start. There are also cost escalation clauses: If raw material prices rise, then the hit is shared with the landowner.
As the market continues to consolidate, expect the sector to produce a predictable stream of earnings and cash flows. Also expect balance sheets to shrink as the predictability of sales would reduce the need for excessive cash reserves. Return on equity and return on capital would be in for an increase. And lastly, price earnings multiples, which have over the last two years started factoring in the increased earnings, could continue to rise.

(This story appears in the 02 July, 2021 issue of Forbes India. To visit our Archives, click here.)

Tweets by @forbesindia
Ten interesting things we read this week
Startup Fridays Episode 12: Culture and values are paramount even to a startup-Samir Bodas