The listing of a third REIT in India provides further scope for retail investors, allowing them to invest in real estate with small amounts, while bringing in greater corporate governance 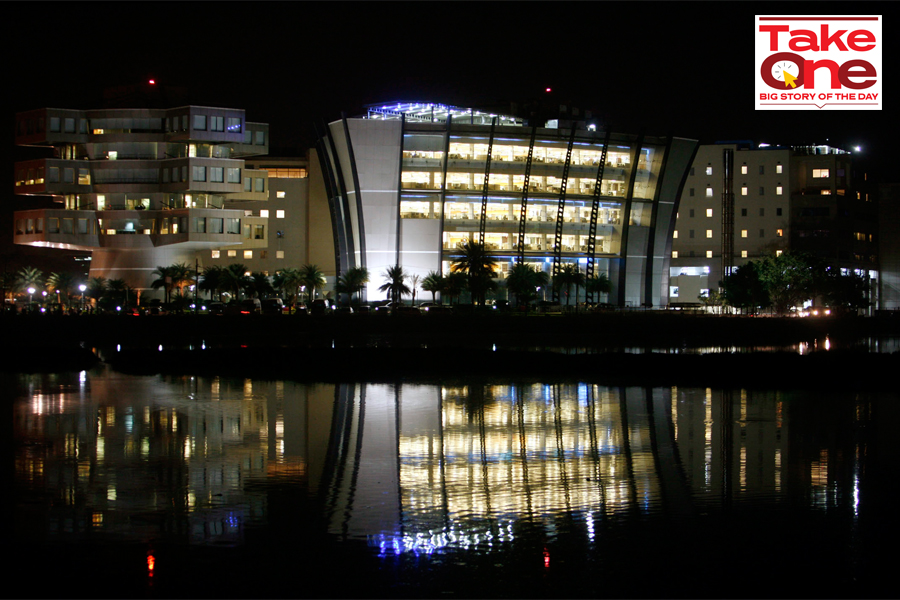 A night view of a tech park in Bengaluru. Photo: Reuters Canadian alternative investment firm Brookfield Asset Management is expected to launch its Indian real estate investment trust (REIT) by the second week of December, say three people familiar with the matter. Brookfield had filed its papers with the markets regulator in October, and while soft commitments have started rolling in from global investors, the official anchor book is expected to be closed by the middle of December. This is the third REIT in India, and opens up the market even more for investors, and it raises the question: Should Indians start investing in REITs?  While this is Brookfield’s first listing of any asset in India—it declined to participate in this story citing market regulations—and its second REIT listing globally, it has a listed portfolio that trades at the New York Stock Exchange (NYSE). Global private equity (PE) firm Blackstone Group-backed Embassy Office Parks REIT (Embassy) had launched India’s first REIT in April 2019. The shares had listed with gains of 4.7 percent at Rs 314.10 apiece, they peaked at Rs 479.79 apiece on March 5, 2020, and have dropped to Rs 340.45 apiece (as of November 24, 2020). In November, Embassy was included in the S&P Global Property Index and S&P Global REIT index, which gives them further exposure to global investors. “REITs are increasingly becoming an attractive investment vehicle, providing investors a stable cash flow and favourable dividend yields. They offer diversification and an opportunity to invest beyond traditional assets, which is especially critical in an environment of ultra-low interest rates. Blackstone is proud to have played a role in the creation of both of the REITs that are currently listed in India,” says Vikram Garg, managing director at Blackstone India. Although REITs have been available in the US for the past four decades, they have taken a while to enter India. While there are two types of REITs—commercial and mortgage—in India, only commercial REITs are available now. Commercial REITs in India typically consist of a portfolio of commercial office buildings. For example, 64 percent of Embassy’s portfolio consists of office spaces just in Bengaluru, and the rest is spread across other top cities. In November, it announced its intention to acquire Embassy TechVillage, a 9.2 million sq ft integrated office park on Outer Ring Road in Bengaluru. The acquisition cost is Rs 9,782 crore, of which it plans to pay Rs 3,700 crore through institutional placement, Rs 2,307 crore as preferential allotment, and debt refinancing of Rs 3,641 crore. Mindspace Business Parks REIT’s projects are spread across the country; it has raised Rs 4,500 crore and its shares had listed at Rs 304 apiece, listing gains of 11 percent to its issuance price of Rs 275 per share. The shares are trading at Rs 305.15 apiece, as of November 24. Capital Partners, Singapore’s sovereign fund GIC, and Fidelity were some of the anchor investors during the listing. REITs work in a simple manner: The listing company owns ready and leased assets, and has to pay dividends every six months to investors. Since its listing, Embassy has paid out Rs 2,760 crore in total distributions to its shareholders. Capital Partners, one of the largest investors in Embassy, lapped up its shares once again a few months ago when Blackstone sold 8.7 percent of its stake in Embassy. Retail investors have to commit a minimum Rs 50,000 to be part of an REIT issuance in India. Mike Holland, CEO at Embassy Office Parks, says, “Last quarter, we returned Rs 840 crore to our shareholders. We have seen a deepening of investor base in the retail segment too. When we listed our shares, we had around 3,500 retail investors, which now stands at 7,500.”

Holland says one of the reasons why domestic investors are warming up to the concept is the fact that Asian investors like real estate as an asset class, and REITs allow them to own a portfolio of ready, leased property. They get access to dividends and also the growth in share price. “International pension funds, sovereign funds, education funds, ETFs are investing in REITs in India. We have certainly seen our investor base deepen over time. Even domestically, retirement funds are deploying money in REITs,” he adds. Holland is also quick to cite that REITs bring in greater corporate governance. An investment banker who has worked on all the three REIT listings says, “One of the key pitches in our roadshows is the fact that these companies are backed by global PE funds and come with strong corporate governance. These assets have built over time and are quality Grade A offices. While the entry barrier for a residential developer is very low, building and maintaining quality commercial assets take time and capital, which these funds have proven over time.” In India, global PE funds, led by Blackstone, have become the biggest landlords. “Until 2019, domestic investors had access to listed real estate companies, where corporate governance is best questioned. A lot of developers are cash-crunched and are selling their assets to these funds to repay their debts; there are a few listed developers who are in the bankruptcy process. But REITs are assets that are generating rents and the company is going to pay dividends,” the banker adds.

While global investors are looking for longer-term yield products to pay investors over the years, and a 7 percent capitalisation rate isn’t a hindrance for them, Indian investors are yet to warm up to listed yield products. While paying a minimum Rs 50,000 to acquire shares is a barrier, another question that has been on the minds of retail investors is that it is not a very liquid product to sell off in the markets. 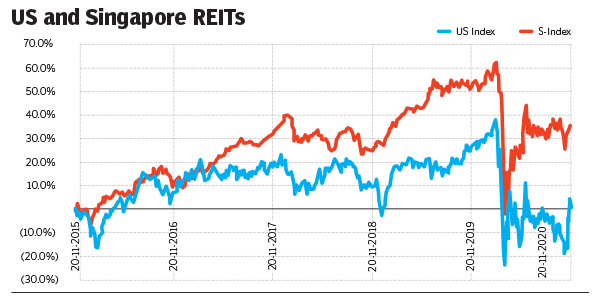 Infographics: Sameer Pawar Another factor that is helping the cause of REITs is the rollback of dividend distribution tax (DDT). In February, as part of the annual Budget, the finance minister had proposed to impose DDT on REIT investors, which had dampened their sentiments. Although the proposal had negligible near-term impact—the Embassy REIT has been paying out distributions mostly in the form of interest and capital return—numerous representations by industry stakeholders prompted the government to roll back the proposed DDT. However, this waiver is on the condition that special purpose vehicles under these REITs will not move to the new, lower tax regime. Apart from these concerns, there is the ongoing Covid-19 pandemic. In 2019, the Indian commercial office market had seen record leasing, with 42 million sq ft of annual net absorption, but between January and October this year, there has been leasing of 23 million sq ft, almost half of last year. The office market has been in an upcycle since 2014, with rising rentals, falling vacancies, consolidation among developers and emergence of REITs. According to Adhidev Chattopadhyay of ICICI Securities, “Given that 30 to 40 percent of Indian office space demand originates from the US, a prolonged economic slowdown there will likely lead to reduced demand for offices in 2020-21. While net absorption has taken a beating in Q2-Q3CY20 owing to lockdowns across India’s tier 1 cities, a number of pre-leasing deals being signed augurs well for a pick-up in occupancy levels from 2021.” Chattopadhyay’s financial model builds in an estimated drop of 40 to 50 percent in demand over the next two years, but he believes there are certain positives in the sector that remain. These include institutional money flowing into Indian realty, and the emergence of REITs as an asset class.