Brookfield is reaping the rewards of its patiently deployed capital

The Canadian firm waited four years before making its first big investment here. Since then, it has built a formidable India portfolio 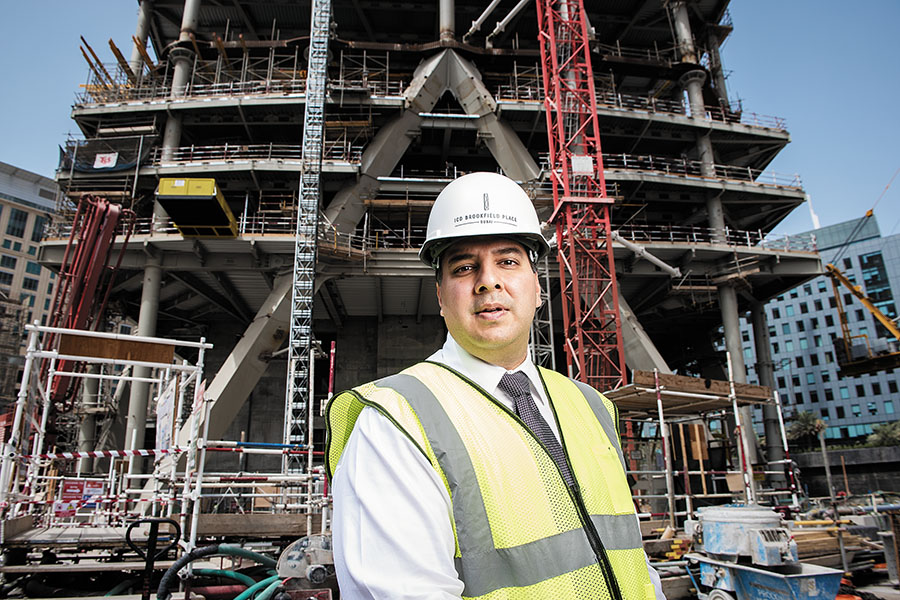 Anuj Ranjan, senior managing partner at Brookfield, waited for an opportune moment before finalising his first big deal in India
Image: Siddharth Siva for Forbes India
It was in mid-2013 that Anuj Ranjan finally sensed a perceptible shift in the Indian real estate market. The 39-year-old senior managing partner at Brookfield had spent four years without inking a single large deal since entering the country. By his own admission, the market, in the 2008-10 period, made little sense, despite a clamour for investments. “At that time, people were so eager to invest that they were signing term sheets in hotel lobbies,” he recalls.

Brookfield, however, chose to stay out. After all, real estate prices were high and valuations unsustainable even after the Lehman crisis. In 2013, however, Ranjan sensed that the opportune moment had arrived. Valuations were beginning to turn south and foreign capital was leaving in droves. Ranjan, remembers one foreign investor telling him, “India stands for ‘I’ll Never Do It Again’.”

Nevertheless, it was exactly the situation that fit the Brookfield template—invest during market dislocations and don’t be afraid to take large, bold, long-term bets.

Ranjan prepared to move in on multifaceted transactions in classic Brookfield style. Unitech Ltd, once India’s second largest real estate company (its market cap crossed $25 billion in 2008), had run into rough weather. The company’s bet on the telecom business with Norwegian partner Telenor had backfired and its office park portfolio was capital-starved.

Up for grabs was 16 million sq ft of office space—spread across Gurugram, Kolkata and Noida—at Unitech Corporate Parks (UCP), which Brookfield had been eyeing since at least 2011. “We’re long-term patient investors, which means that we are also patient in the run up to the deal,” says Ankur Gupta, senior vice president and regional head, real estate India at Brookfield, that manages approximately $285 billion of assets globally.

The UCP acquisition began in late 2013 and was one that few foreign investors would have opted for. For one, the office parks were co-owned by several entities apart from Unitech in different jurisdictions and so there was no certainty that the transaction would close. Second, only about half of the 16 million sq ft portfolio had been built. With India’s multiple regulatory issues, no foreign investor till then or since has taken the risk of acquiring a partially-complete asset.

But Brookfield went ahead. Sixty percent of UCP was listed on AIM—a sub-market of the London Stock Exchange, which allows smaller international companies to float their shares—while 40 percent was pledged to a bank in India.

Brookfield started acquiring UCP shares on AIM in 2013 and continued to do so through 2014. After patiently buying 16.65 percent of UCP’s outstanding shares on the exchange, it spent the next year buying the stake of five co-owners of the company. 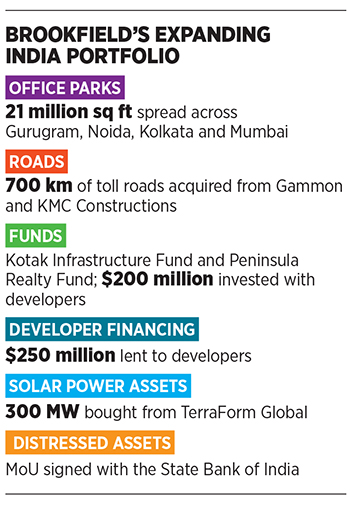 Eventually, Brookfield became the sole owner of UCP. While precise numbers are not available, Forbes India estimates Brookfield spent $900 million on the deal. The acquisition also marked its arrival as a significant real estate investor spread across the UK, India and Mauritius.

Brookfield then had the hard task of building the incomplete 8 million sq ft of office space at UCP and leasing twice that number. Along the way, Brookfield made more significant acquisitions, not just in the office space but also in the infrastructure space (roads and solar assets), and is looking to buy into coal-fired plants through a distressed asset sale deal with the State Bank of India. With $5 billion invested so far across real estate, infrastructure and private equity, and 30 investment professionals and 600 boots on the ground, Brookfield plans to be in India for the long haul and is well positioned to sponsor a high quality REIT (real estate investment trust).

*****
Among large real estate investors, Indian office parks have emerged as the most-sought-after investible asset class. The segment attracted $4 billion in investments in 2017, according to global real estate services firm Jones Lang Lasalle. These sizeable developments of as much as a million square feet in one building, often located on the outskirts of cities, typically house ecommerce and IT companies.

The largest demand comes from global companies running their back offices in India. “The demand for this type of office market is directly related to the health of the global economy,” says Ambar Maheshwari, chief executive, Indiabulls Private Equity. With global growth at 3.6 percent in 2017, demand for office space in India continues to be buoyant with 42.8 million sq ft leased in 2017, according to Colliers International India.

Marquee real estate developers—K Raheja Corp, DLF, the Embassy Group, Prestige Estates, RMZ—across the country have over the last decade operated on a simple template. They construct office parks and then either sell them in whole or in part to foreign investors or, less often, manage the assets themselves. For now, Blackstone, Brookfield and GIC, Singapore’s sovereign wealth fund, have emerged as the three frontrunners in acquiring office assets in India.

While Blackstone is a clear leader, GIC and Brookfield compete for second spot. Brookfield wholly owns all its parks; GIC has minority stakes in several parks. “Every single-owner office building in India is in play,” says Ramesh Nair, chief executive of JLL.

Competition in this space has also been driving up capital values. Every building over ₹500 crore is now attracting as many as 10 bids compared to half of that three years earlier. These assets are owned and operated by a single entity. Assets below ₹250 crore are usually bought by wealthy Indians either individually or as a consortium.

Unlike the residential market in India where rental yields hover at 2-2.5 percent, commercial real estate commands rents of 6.75-7.75 percent, making it saleable as a yielding asset. Robust demand has meant that in several pockets, landlords have been able to command lease rates up to 10 percent in the last year. (Since 2016, yields have fallen by 1.25 percent as Indian interest rates have dropped by the same amount.)

In 2016, a year after Brookfield closed the UCP (since renamed Candor Office Parks) deal, it made its second bold bet with the $1 billion-acquisition of Hiranandani’s 4.2 million sq ft office park in Powai, Mumbai. “I had a pleasant experience dealing with them and was impressed by the speed with which they moved. They were also meticulous when it came to paperwork,” says Niranjan Hiranandani, managing director of the Hiranandani Group.

Brookfield’s 21 million sq ft, and growing, portfolio in India gives it the chance to offer its clients office space solutions across India. These clients—Barclays, Deloitte, Credit Suisse, Accenture, TCS—often prefer to stick with a single developer. Several clients may also be tenants at Brookfield properties around the world and that helps Brookfield in India get its foot in the door when leasing deals are being negotiated.

That said, tenants can also be demanding. Property maintenance must be top-class and operators must go the extra mile to please clients.

At some locations, Brookfield has had to make changes to refresh the look of its buildings. “Some of our buildings are used seven days a week, often across three shifts and so the wear and tear is a lot more than regular offices,” says Gupta. In a Gurugram property, for instance, air conditioning systems had to be replaced when a tenant expressed unhappiness. Brookfield has its own property management company and has not outsourced the job, raking in good additional revenue.

A key reason for Brookfield’s success has been its willingness to wait for the right opportunity. Here the company shares a canny similarity with rival Blackstone, which also waited for four years before doing its first real estate deal in India in 2009. Brookfield also has the advantage of being able to access vast pools of capital at short notice. Simply put, there are not that many entities invested in India that can write a billion-dollar cheque at short notice. In addition, they are also owner operators who derive a lot of value from operating the assets themselves.

Ranjan swears by three principles that keep his investments in good stead. To start with, greenfield projects have a lot more risk than investors usually underwrite. Hence, it is better to buy into near-completed assets even if they have some leasing left and that is also better than buying land. Second, the choice of partner is important and is a huge driver of what Ranjan terms as the “return on time invested”, as the capabilities of both firms can be combined to drive value in the business. With the Unitech transaction, Brookfield chose to acquire 100 percent control over the office parks so as to have a free rein to apply its operational expertise. Third, a pan-India presence is necessary as it helps hedge the portfolio against risks like price stagnation.

As Brookfield prepares to enter its second decade in India, it is working on broadening its portfolio. It has done deals in the fund management space where it has acquired the general partner in an AIG India fund. It has stitched up deals with Kotak’s Core India Infrastructure Fund and Peninsula Realty Fund. In all, Brookfield has lent $450 million to real estate developers across India in the form of debt.

Road assets have been bought as well as 300 MW of solar power generating plants and it is actively looking at telecom towers too.

Mumbai, which began as a satellite office in 2009, is now an integral part of Brookfield’s investment strategy and Ranjan has since added the Middle East to his remit. India is now as important a market for Brookfield as the UK, Europe and Brazil. Bruce Flatt, chief executive of Brookfield, visits India once a quarter and is on the lookout for new investment ideas.

With corporate bankruptcies rising, it would be fair to expect Brookfield to pick up some assets in this space. The company is keeping its eyes peeled for more deals.