Commercial property braces for lease expiries worth Rs 6,000 cr. What happens next?

Indian commercial real estate has been the darling of global private equity investors. But with the novel coronavirus outbreak bringing the economy to its knees, can it still stand tall? 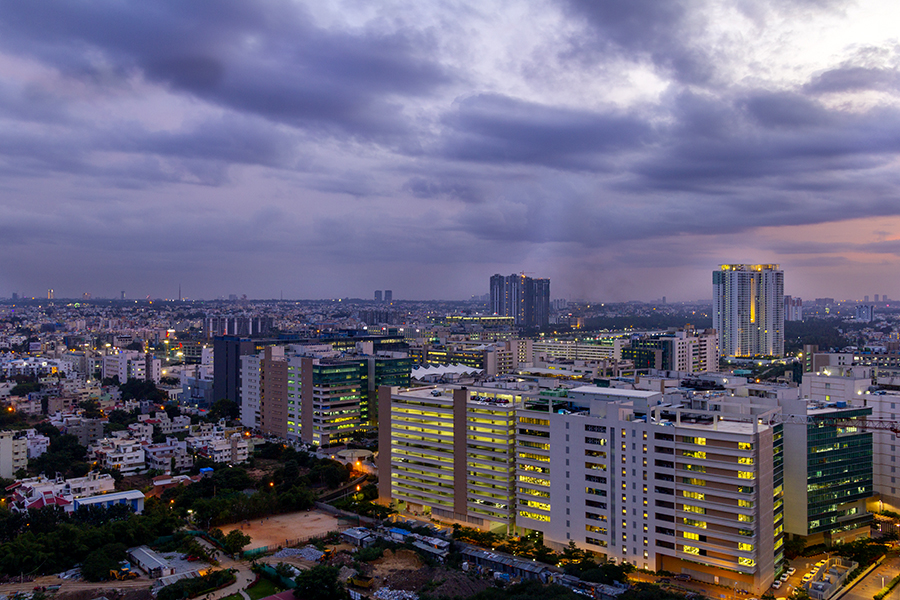 
According to real-estate data platform Propstack, commercial office lease expiries worth annualised rent of Rs 6,000 crore (or monthly rent of nearly Rs 500 crore) are coming up in FY21. “Of the entire amount, nearly 60 percent of the value of the lease expiries are in Bengaluru and Mumbai alone. The industry will be keeping a close watch on how these renewals will pan out as businesses plan to keep a check on costs in the current economic scenario,” says Sandeep Reddy, co-founder of Propstack. 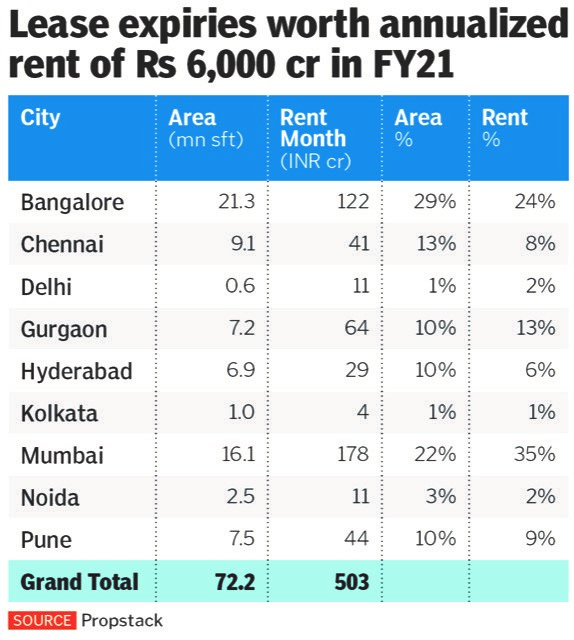 A closer look at the data indicates that this encompasses nearly 72.2 million sq ft, of which Mumbai alone accounts for 16.1 million sq ft with 35 percent of the rent value. Most lease contracts have a tenure of three to five years with an annual rent appreciation clause; some larger information technology and foreign banks lease out for nearly 10 years. Both types of leases are included in this data set. Between 2010 and 2019, nearly 319 million sq ft of office supply has been created in the country.

To put it in context, in a normal year, the Indian office market sees net new absorption of about 33 million sq ft; calendar year 2019 was, in fact, a bumper year for commercial real estate in India, with net absorption at 46.5 million sft, a growth of 40 percent on a year-on-year basis. Traditionally most old leases roll over, but with finances stretched across companies, lease renewals are now expected to see downward revision of rentals. An analyst with a domestic brokerage says, “From conversations with listed clients, we estimate that rents will come down by 10 percent for this year and depending upon economic recovery, things could stabilise. However, prices are not expected to go up at all, and all older projections need to be reviewed.” Since 2011, the Indian office space segment has been largely dominated by global private equity funds—Blackstone is the largest landlord in India, followed by the likes of Canadian investment firm Brookfield Investment Management, Singapore-backed Capitaland, among others. Firms including DLF, Oberoil Realty, Brigade Enterprises, Embassy Properties also own large-scale office spaces. US-based companies account for 45 percent occupiers of office space, followed by Indian firms at 30 percent. “Large office spaces are typically occupied by multinational companies. A majority of them understands that force majeure does not apply, and they have paid their rent,” said the India head of one of the largest global private equity funds, on condition of anonymity. The firm has deployed nearly $4 billion in acquiring commercial Grade A office space in India. He added that rent collection for April has been over 90 percent in most of their properties and that office space could see an impact from a future take-up perspective—there are chances of those getting deferred by one to two quarters. He adds, “In a one-year period, there should be no impact on commercial real estate. If there is any pain, it will even out in the next three to six months.” According to a report by property consultancy Anarock, delay in construction and absence of labour and material will result in a significant decline in supply, which is estimated to be lower by 15 percent to 30 percent over pre-Covid-19 estimates. Net absorptions can also fall by 17 percent to 34 percent. Another India head of real estate practice, one of the largest investment firms with investments of nearly $3 billion in office parks across the country, who did not wish to be identified, said, “While everyone is working from home we can’t forget the fact that servers are working; so yes, 75 percent to 80 percent will renew their leases. Clients who are running critical activity can’t shut shop.” While there could be tenants asking for rent deferrals, he added that as most of the clients are large multinationals and those onboarded after assessing credit worthiness, rent negotiations in existing contracts are unlikely. “We will see impact if the broader economy is not functioning properly. The services sector is the leading category of tenants and we have a long way to go before we shift most of our workforce to homes. We are invested for the long term in India, and this situation will ease out the over-supply in the segment,” he says. While there is no number yet on the lease amount that will be discounted by office landlords, it is expected that the picture will be clearer over the next few months. Tenants who are still under the lock-in period will find it difficult to force any clauses or negotiate rents unless they are large-sized clientele. It is only those who are out of their lock-in periods and nearing lease expiries who will be able to negotiate harder or revisit their approach towards how many employees to call to work. “What we are seeing is a delay in decision-making, as clients are turning around and saying that they are postponing capex. We have not seen any mass-scale negotiations yet. It is too early to quantify on the kind of rental pressures we will see in lease renewals as clients are under pressure to show cost savings, and they want to know how landlords can help,” said Ramesh Nair, CEO and country head at property consultancy JLL India.