The catalyst for the swoon was the continued turmoil at China Evergrande Group, one of that country's top three developers of residential properties 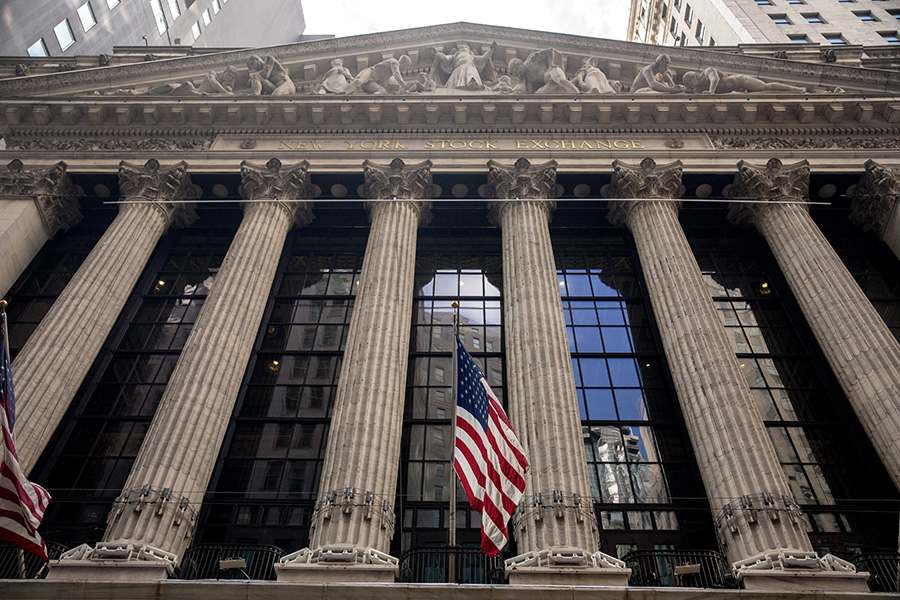 The New York Stock Exchange building in Manhattan on Monday, Sept. 20, 2021. A sell-off started in Asia and spread to Europe before landing in the United States on Monday, where the S&P 500 fell 1.7 percent, the worst one-day slide since mid-May. (Dave Sanders/The New York Times)
Investors on three continents dumped stocks Monday, fretting that the governments of the world’s two largest economies—China and the United States—would act in ways that could undercut the nascent global economic recovery.

The Chinese government’s reluctance to step in and save a highly indebted property developer just days before a big interest payment is due signaled to investors that Beijing might break with its long-standing policy of bailing out its homegrown stars.

And in the United States, the globe’s No. 1 economy, investors worried that the Federal Reserve would soon begin cutting back its huge purchases of government bonds, which had helped drive stocks to a series of record highs since the coronavirus pandemic hit.

The sell-off started in Asia and spread to Europe— where exporters to China were slammed — before landing in the United States, where stocks appeared to be heading for their worst performance of the year before a rally at the end of the trading day. The S&P 500 closed down 1.7%, its worst daily performance since mid-May, after being down as much as 2.9% in the afternoon.

The catalyst for the swoon was the continued turmoil at China Evergrande Group, one of that country’s top three developers of residential properties. The company has an estimated $300 billion in debt, and an interest payment of more than $80 million is due this week.

Analysts said Evergrande’s plight was severe enough that it would be unlikely to survive without Chinese government support. “The question is to what degree are there spillover risks within Chinese equities and then cascading into the global markets,” said John Canavan, lead analyst at Oxford Economics.

Few entities move markets the way the American and Chinese governments can, by their actions and inaction, and the worldwide tumble Monday made this clear. Until recently, investors seemed content to ignore a variety of issues complicating the recovery — including the emergence of the delta variant and the supply chain snarls that have bedeviled consumers and manufacturers alike.

But beginning this month, as Evergrande began to teeter and the likelihood of the Fed’s scaling back — or tapering — its bond-buying programs grew, the market’s protective bubble began to deflate. Some U.S. investors are also concerned that tax increases are in the offing — including on share buybacks and corporate profits — to help pay for a spending push by the federal government, the signature piece of which is President Joe Biden’s proposed $3.5 trillion budget bill. Separately, Congress also must act to raise the government’s borrowing limit, a politically charged process that has at times thrown markets for a loop.

On Monday, those currents combined, reflecting the interconnectedness of the global markets as investors everywhere sold their holdings.

The decline was ugliest in Asia, where Evergrande’s woes — its shares fell 10.2% — dragged down other Chinese real estate companies’ stocks by 10% or more. Markets on the Chinese mainland were closed for the day, but Hong Kong’s Hang Seng index fell 3.3%.

For decades, Chinese growth was driven by investment in infrastructure, including the market for residential property, which was financed with huge sums of borrowed money. Banks often lent to developers at the direction of the government, which looked at property building as a source of jobs and economic growth.

“Beijing says lend, so you lend; when or even whether you get your money back is secondary,” wrote analysts with China Beige Book, an economic research firm.

Many lenders therefore viewed companies such as Evergrande as having an implicit guarantee from the government, meaning that if the company couldn’t pay its debts, the government would ensure creditors get repaid.

Now that understanding is being tested. The company doesn’t seem to have the cash for the interest payment due this week, and credit markets are largely closed to the firm. Few expect it will be able to pay up on its own, but so far the Chinese government hasn’t moved conclusively toward a bailout.

The uncertainty around Evergrande is just the latest question investors have faced this year, as the Chinese government has shown signs of sharply shifting away from the policies that have guided its economy for much of the past decade.

Shares of Chinese technology giants including Alibaba have been hammered this year, as Beijing has flexed its regulatory muscles on issues including data privacy. But the implications for China’s shifting policies reach beyond its borders.

Curbs on steel production over environmental concerns have driven down prices for iron ore, which has fallen more than 40% over the past three months. And global prices for crude oil — China is the world’s largest importer of petroleum — dropped 1.9% on Monday.

The price of copper, used in wiring and a hot commodity for Chinese property developers, fell more than 3%, weighing on producers worldwide. On U.S. exchanges, industrial stocks that are closely linked to China also fell. Freeport-McMoRan, a copper and gold mining giant based in Phoenix, was one of the worst-performing stocks in the S&P 500, falling 5.7%.

The elevator maker Otis, a major supplier for Chinese high-rises, dropped more than 2%. And construction equipment maker Caterpillar, whose second biggest market is China, was down 4.5%.

Looming decisions by policymakers at the Federal Reserve and in Congress are also weighing on stock market sentiment, analysts say.

On Wednesday, the Fed is expected to signal that it plans to begin reducing its purchases of government bonds, which have pumped trillions of dollars into financial markets since the COVID crisis started in March 2020.

Substantial deficit spending by the federal government has helped supercharge growth and prop up corporate profits during the pandemic. But with much of that money spent, investors are now closely watching the $3.5 trillion spending plan Democrats are trying to push through Congress.

There are signs that they are becoming less certain about the bill’s passage. This month, share prices for companies whose businesses would benefit from another jolt of federal spending have slumped, such as large engineering and construction firms.

Dycom, which specializes in construction and engineering of telecommunication networking systems, is down nearly 11% since the end of August. Fluor, another engineering and construction company that has a large government contracting business, is down about the same. Alternative energy stocks such as Enphase Energy and Bloom Energy have also dropped.

Investors are also increasingly focused on when Congress will raise the debt ceiling, a formerly perfunctory budgeting exercise that has become increasingly politicized. In 2011, the rancorous debate about increasing the debt limit was accompanied by a sharp market slump, as representatives in Washington appeared to flirt with the idea of not raising the constraint on borrowing, which would effectively amount to a default on Treasury bonds.

“It’s going to be drama for the sake of politics,” said Lisa Shalett, chief investment officer at Morgan Stanley Wealth Management. “People don’t like that.”

Tweets by @forbes_india
Timeline: A look at the life and work of Angela Merkel
Brick&Bolt: How the uncle-nephew duo is reimagining the messy world of construction with technology