The sprawling, $1 trillion bill, a 2,702-page bipartisan deal that is the product of months of negotiating and years of pent-up ambitions to repair the nation's crumbling infrastructure—would amount to the most substantial government expenditure on the aging public works system since 2009 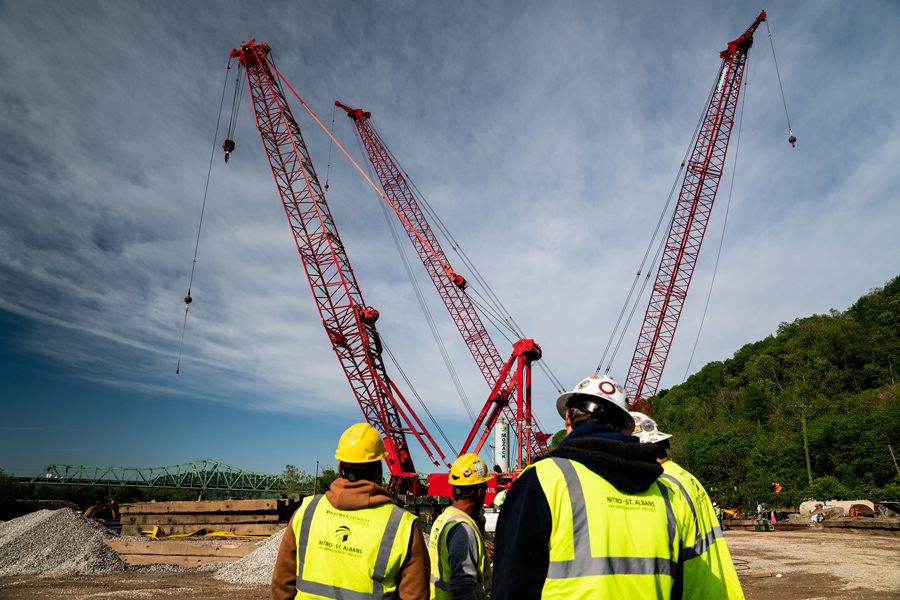 Construction on a bridge in Charleston, W.Va., May 6, 2021. The sprawling, $1 trillion bill that the Senate took up on Monday, Aug. 2, 2021 — a 2,702-page bipartisan deal that is the product of months of negotiating and years of pent-up ambitions to repair the nation’s crumbling infrastructure — would amount to the most substantial government expenditure on the aging public works system since 2009. (Erin Schaff/The New York Times)

Amtrak would see its biggest infusion of money since its inception a half-century ago. Climate resilience programs would receive their largest burst of government spending ever. The nation’s power grid would be upgraded to the tune of $73 billion.

The sprawling, $1 trillion bill that the Senate took up Monday — a 2,702-page bipartisan deal that is the product of months of negotiating and years of pent-up ambitions to repair the nation’s crumbling infrastructure — would amount to the most substantial government expenditure on the aging public works system since 2009.

It is also stuffed with pet projects and priorities that touch on nearly every facet of American life, including the most obscure, like a provision to allow blood transport vehicles to use highway car pool lanes to bypass traffic when fresh vials are on board and another to fully fund a federal grant program to promote “pollinator-friendly practices” near roads and highways. (Price tag for the latter: $2 million per year.)

The measure represents a crucial piece of President Joe Biden’s economic agenda, and the agreement that gave rise to it was a major breakthrough in his quest for a bipartisan compromise. But it was also notable for the concessions Biden was forced to make to strike the deal, including less funding for clean energy projects, lead pipe replacement, transit and measures targeted to historically underserved communities.

Some of those provisions could be included in Democrats’ budget blueprint, expected to amount to $3.5 trillion, which they plan to take up after completing the infrastructure bill and push through unilaterally over Republican objections.

The infrastructure legislation, written by a group of 10 Republicans and Democrats, could still change in the coming days, as other senators eager to leave their imprint have a chance to offer proposals for changes. The Senate began considering amendments Monday, with more possible in the coming days.

But the legislation marks a significant bipartisan compromise, including $550 billion in new funds and the renewal of an array of existing transportation and infrastructure programs otherwise slated to expire at the end of September.

Falling Short of Climate Goals
As states confront yet another consecutive year of worsening natural disasters, ranging from ice storms to wildfires, the measure includes billions of dollars to better prepare the country for the effects of global warming and the single largest federal investment in power transmission in history.

Much of the money intended to bolster the country’s ability to withstand extreme weather would go toward activities that are already underway, but which experts say the government needs to do more of as the threats from climate change increase. It also would support new approaches, including money for “next-generation water modeling activities” and flood mapping at the National Oceanic and Atmospheric Administration, which would also receive funds to predict wildfires.

The legislation also includes $73 billion to modernize the nation’s electricity grid, which energy analysts said would lay the groundwork for pivoting the nation off fossil fuels. But it contains only a fraction of the money Biden requested for major environmental initiatives and extends a lifeline to natural gas and nuclear energy, provisions that have angered House progressives.

There is also $7.5 billion for clean buses and ferries, but that is not nearly enough to electrify about 50,000 transit buses within five years, as Biden has vowed to do. The bill includes $7.5 billion to develop electric vehicle charging stations across the country, only half of the $15 billion Biden requested to deliver on his campaign pledge of building 500,000 of them.

Winning Pet Priorities
As one of the few major bills likely to be enacted during this Congress, the infrastructure measure has become a magnet for lobbying by industries across the country — and by the lawmakers whose votes will be needed to push it through, many of whom spent Monday highlighting funds for their top priorities.

For the quartet of senators who represent the legions of federal workers who use the Washington Metro — Sens. Tim Kaine and Mark Warner of Virginia, and Benjamin Cardin and Chris Van Hollen of Maryland, all Democrats — there was a critical annual reauthorization of $150 million for the transit system over a decade.

The legislation would authorize funding to reconstruct a highway in Alaska, the home state of Sen. Lisa Murkowski, a key Republican negotiator. Special funds are set aside for the Appalachian Regional Commission, a federal economic development body whose co-chair is Gayle Manchin, the wife of Sen. Joe Manchin III of West Virginia, one of the bill’s principal authors and a key Democratic swing vote. Manchin also helped secure funds to clean up abandoned mine lands in states like his.

Repurposed Pandemic Funds
With Republicans and some moderate Democrats opposed to adding to the nation’s ballooning debt, the legislation includes a patchwork of financing mechanisms, though some fiscal hawks have called many of them insufficient.

To pay for the legislation, lawmakers have turned partly to $200 billion in unused money from previous pandemic relief programs enacted in 2020.

That includes $53 billion in expanded jobless benefit money that can be repurposed since the economy recovered more quickly than projections assumed, and because many states discontinued their pandemic unemployment insurance payments out of concern that the subsidies were dissuading people from rejoining the workforce.

The bill claws back more than $30 billion that was allocated — but had not been spent — for a Small Business Administration disaster loan program, which offers qualified businesses low-interest loans and small grants. That program has been stymied by shifting rules and red tape, and has disbursed cash far more slowly than Congress (and many applicants) expected.

Leftover funds from other defunct programs would also be reprogrammed. That includes $3 billion never deployed in relief funds for airline workers.

Providing Critical Resources
As the United States remains battered by both the toll of the coronavirus pandemic and an onslaught of wildfires, droughts, floods and other weather calamities, the legislation seeks to target its support toward underserved communities historically in need of additional federal support.

But while Biden had called for $20 billion for projects designed to help reconnect Black neighborhoods and communities of color splintered or disadvantaged by past construction, the legislation includes just $1 billion, half of which is new federal funding, over five years for the program. The legislation also creates a new $2 billion grant program to expand roads, bridges and other surface transportation projects in rural areas.

Closing the Digital Divide
Alongside old-fashioned public works projects like roads, bridges and highways, senators have included $65 billion meant to connect hard-to-reach rural communities to high-speed internet and help sign up low-income city dwellers who cannot afford it. Other legal changes seek to stoke competition and transparency among service providers that could help drive down prices.

Official estimates vary, but most suggest that tens of millions of Americans lack reliable access to high-speed internet, many of them people of color, members of rural communities or other low-income groups. That need, lawmakers said, was exacerbated by lockdowns during the pandemic that required work and schooling from home.

Biden had initially proposed $100 billion to try to bring that number to zero, but he agreed to lower the price to strike a compromise with Republicans. Democrats also fought to secure the inclusion of legislation to encourage states to develop comprehensive plans to ensure that access to high-speed internet is distributed equitably among traditionally underserved groups and educate them about access to digital resources.

Tweets by @forbesindia
Beware of the Hypertensive Complications
Photo of the day: +1 for effort