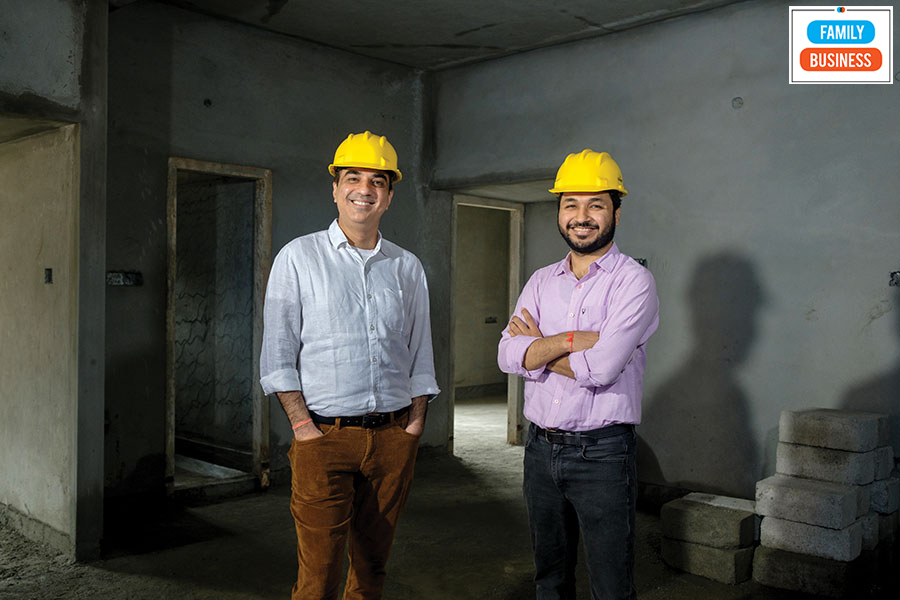 It wasn’t the most supportive reaction from family. “Online ghar kaun banayega (who would want to build a house through online)?” asked Jayesh Rajpurohit’s mother when he floated the idea behind his startup Brick&Bolt to her and his sisters.

But that didn’t deter him from working towards it. “There are two things that are considered most complicated in India—hosting a wedding and making a house,” says Jayesh, 41. “It’s this belief I wanted to change.”

“It was the perfect amalgamation,” says Jayesh. “Construction is considered the most tech-deficit industry globally. My knowledge of civil engineering wasn’t going to be enough if it wasn’t backed by technology in today’s day and age. Arpit’s strong understanding of technology took everything a notch higher,” he adds.

Besides sharing a great bond—Arpit had spent four to five years growing up with Jayesh’s family—both had also experienced first-hand the problems that came with building a house. Arpit recounts the time his mother was getting a house constructed in Ahmedabad. “The costs increased midway into the construction, the project got delayed for reasons unknown and the contractors were very irregular,” Arpit says. “These are exactly the kind of problems we wanted to help people avoid.”

Brick&Bolt was their answer to bringing predictability and transparency into construction, an industry that is otherwise considered highly unorganised.

Put simply, Brick&Bolt is an end-to-end construction services platform. Upon contacting them, their architects help clients with exhaustive drawings that include floor plans, 3D elevations, electrical, plumbing and structural designs. Project managers are then allotted to them who work on a contract and other specifications, and payment schedules are then fed into a system. It is backed by an artificial intelligence-based software that helps keep a tab on the schedule and the progress of ongoing projects along with overseeing the quality. In case of non-permissible delays, the platform penalises contractors too. Brick&Bolt operates on a commission-based model wherein they charge a service fee from the contractors.

Every stage of construction is monitored through their software and to avoid price escalations Brick&Bolt works on an escrow model wherein customers are expected to transfer money at every stage and contractors are paid after its completion. Through their quality assessment system, the company also conducts 310 quality checks per floor of the construction.

“Even now, we are sitting on a huge open book. We have received bookings, but people are waiting for the third wave to pass before they start construction,” Jayesh says. If anything, the pandemic will help them grow further, he reckons. “We have noticed a positive trend for buying plots. People are moving back to their native places, and have expressed the need for bigger homes. So we foresee a lot of business coming our way,” he says.

Present in three cities–Bengaluru, Mysuru and Hyderabad—Brick&Bolt is also going to enter the Chennai market later this year and four more cities by the next financial year. “The problem [of constructing a house] is so intense, we’ve never found a challenge on the demand side,” says Jayesh, adding that they hope to touch an annualised GMV (gross merchandise value) of $5 billion by 2025.

While the initial capital of ₹25 lakh came from a batchmate of Jayesh’s from IIT, the company has also raised $1.5 million from Sequoia India’s scale-up programme Surge in a pre-Series A funding round in February 2020 and an additional $2.2 million from Germany-based venture capital firm Foundamental. It has also been funded by angel investors, including founders of Livspace Anuj Srivastava and Ramakant Sharma, Aakash Goel, formerly with Trifecta Capital, and Navin Dhanuka from Piramal Fund Management.

“Everyone aspires to construct a house but doesn’t know how to. This industry lacks a data-driven approach, so with Brick&Bolt I saw that they had the potential to convert unorganised to organised and that they were going to be a game changer. So, it only made sense to invest,” says one of the angel investors, Meghna Agarwal, also co-founder of co-working space IndiQube.

“ This industry lacks a data-driven approach. With Brick&Bolt, I saw that they had the potential to convert unorganised to organised and that they were going to be a game changer.”
Meghna Agarwal, angel investor, and co-founder, IndiQube

When they started in 2018, Jayesh made several calls to potential customers asking about their requirements, but it didn’t lead to any projects and they wondered if they should go ahead.

But the duo knew the market size was huge and decided to stay put. “We knew that if we cracked the model, we would be solving a real-life problem, especially for people of a country who put their life’s savings into making a house. We knew there was immense scope to address this problem with technology. At that point in time, we asked, if not us, then who, and took the plunge, and here we are,” says Jayesh.

The idea of working together too came naturally to the duo. “We understand each other very well. We’ve had fights before we launched the company on various topics... I’m very comfortable with him,” Jayesh says. “I know his tech capabilities, expertise and experience, so we knew we had to pair up.”

Often, one is advised against working with family. But Jayesh thinks otherwise. “I trust Arpit because he is family,” he says.

Arpit thinks a shared value system has helped them taste success. “We are both spiritually inclined, and look at life in a similar way. At work, we are both employees, and make it a point that work doesn’t percolate into our homes or families. We don’t let other employees feel that we are related,” he says.

Recently, they were listed in Forbes Asia’s ‘100 to watch’ companies, and have plans to raise the next round of funding in December 2021. The company, which started with five team members, including the Rajpurohits, now has 130 employees and Jayesh is confident they will cross 250 by the end of FY22.

“We were getting into the unknown, with no expectations, but our booking numbers and funding are testimony to the fact that we’re doing well,” Jayesh says. And as far as the family is concerned, the duo says, they are now visibly happy and excited. “We have proven them wrong and shown them that the model is working,” Jayesh says.