These brothers who code, and husband-wife duos, are bringing advanced analytics and artificial intelligence to varied sectors, from banking to retail 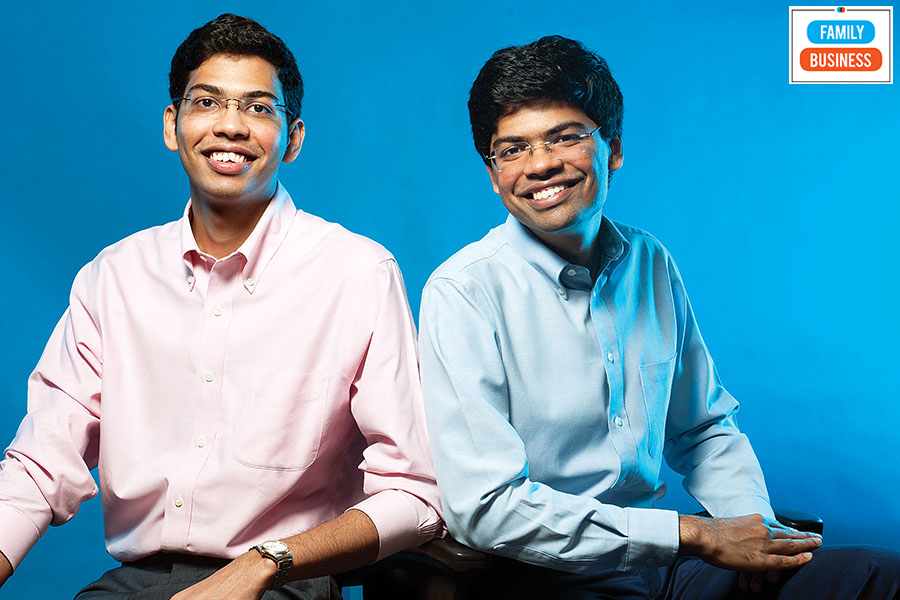 Abhinav Aggarwal and Raghav Aggarwal once teamed up with Forbes and got their AI-based interactive voice bot to power a Warren Buffet likeness to answer questions on finance and the economy. It was quite a hit. In August this year, they were granted a US patent related to the underlying technology of that bot, along with another one for some of the algorithms they wrote at their company Fluid AI.

The brothers, Forbes India 30 Under 30 winners, dropped out of business school, one from Indian School of Business and the other from IIM Ahmedabad, to start Fluid AI. They bootstrapped it in 2012, and “we continue to be quite ‘Marwari’ in our approach to it,” Abhinav tells Forbes India. Meaning, they remain shrewd about ownership and running the business like the Marwari community in India is known for.

They have been offered everything from VC money to buy-outs, but the brothers have chosen to keep their business bootstrapped. It has been profitable pretty much from the get-go. In fact, this year, revenues surged 2x and profits, 4x, Abhinav, the CEO, says. Elder brother Raghav is the managing director. 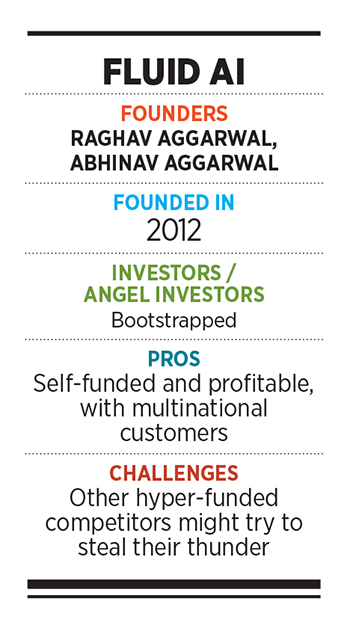 They had actually started out building a learning management software, for the education tech space, but being “very passionate about technology”, took to AI. And then, “AI is a great barrier to entry, because it is an area where you cannot just throw people at the problem, and a small team like ours can make an impact,” he says.

The brothers are inspired by the frugal, but highly effective, tech team at Zerodha, India’s biggest online brokerage, which has built a user-friendly trading app called Kite. The Aggarwals are self-taught coders and have won one of the TechCrunch Disrupt hackathons as well. More recently, they have collaborated with General Electric to look at applications of their AI solutions in health care.

Today, Fluid AI has two main products. The first is a conversational AI assistant—one banking customer that used it reduced the process of selling a financial product to an interested potential customer to 12 minutes from 12 days. The second is an analytics engine, called Frontier Analytics. Both are used largely by banks and financial institutions, and one of the biggest use cases, as entrepreneurs like to say, is to predict loan defaults. Customers include names like Bank of America and MasterCard.

Fluid AI ingested a lot of data from the banks, and built a model using Frontier Analytics, which accurately predicted when someone would default a month ahead. Second, the model also helped credit score people who were looking for loans. The model reached 85 percent-plus levels of accuracy, Abhinav says. 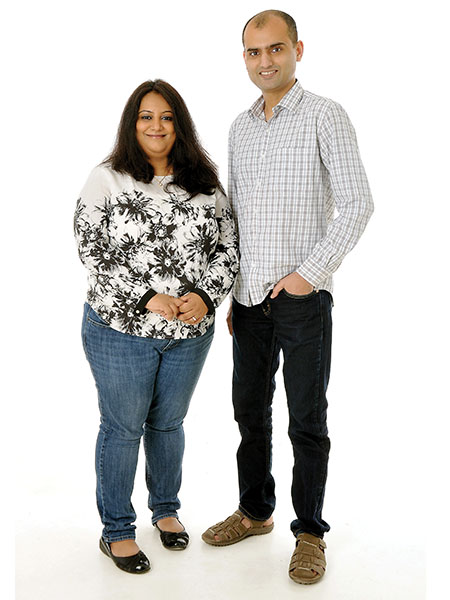 On the other hand, Meghna Suryakumar and Sandeep Anandampillai’s Crediwatch combines a lawyer’s instincts about companies with a nerd’s love of automation and tech to surface red flags so businesses can take steps to mitigate losses.

The husband-wife duo go way back. Suryakumar and Anandampillai first met at a school trekking camp. Then they attended the same college as well, kept in touch and ended up getting married. The company they started together is about the same age as his son, Anandampillai tells Forbes India.

He has worked at well-known software companies including Oracle and Thoughtworks. At the same time, Meghna was running a law firm. “I like to tinker, and I tried to build some tech to help her with her clients,” he recalls. He set up some of the tech processes at her firm, helped her find some IT consultants and so on.

In the process, they realised that data was going to be one of the biggest factors in tech in the future. Anandampillai was convinced enough to actually quit his job and start working on the programming needed to get a couple of experiments around data off the ground.

He set up a company called Minoti Solutions, around smart contracts with wizards that would help someone build a contract—like a rental agreement, for example. But they were ahead of their times, at least as far as India was concerned. Then, Suryakumar had ideas about the need for due diligence with companies, and they realised their programmes could do a lot more than help build smart contracts, because Anandampillai already had the rudiments of a software robot that could mine data, while his original intention at Minoti was that it should completely automate the process of churning out a contract.

Thus was born Crediwatch, which is a data-insights-as-a-service provider. If businesses can get alerts about the financial position of their partners, vendors and others that they deal with, they can take better and quicker decisions, potentially avoiding losses, Suryakumar, who is the CEO of Crediwatch, says.

“We have something called a ‘trust score’, which is similar to the Cibil score for businesses, where if you are going to do business with a new partner, supplier or borrower, you would be able to get a good snapshot on whether the business is trustworthy or not,” Meghna says, based on data on previous behaviour.

Crediwatch’s algorithms also churn out early-warning scores that businesses can get every month, on their partners and others they do business with. An example of a red flag is, “if a business has not paid its GST for three or four months, they probably will not pay your bill,” she says.

Anandampillai runs the tech team at Crediwatch that has developed software to analyse data and come up with these alerts. “I am not a good negotiator,” he admits. “While I might understand business, and build a good product, extracting the crux of the problem is a skill, and she is good at that,” he says. That informs their division of labour as well. Anandampillai will make the calls on how to build their tech, while Meghna decides on the overarching vision, based on her finger on the pulse of their customers. 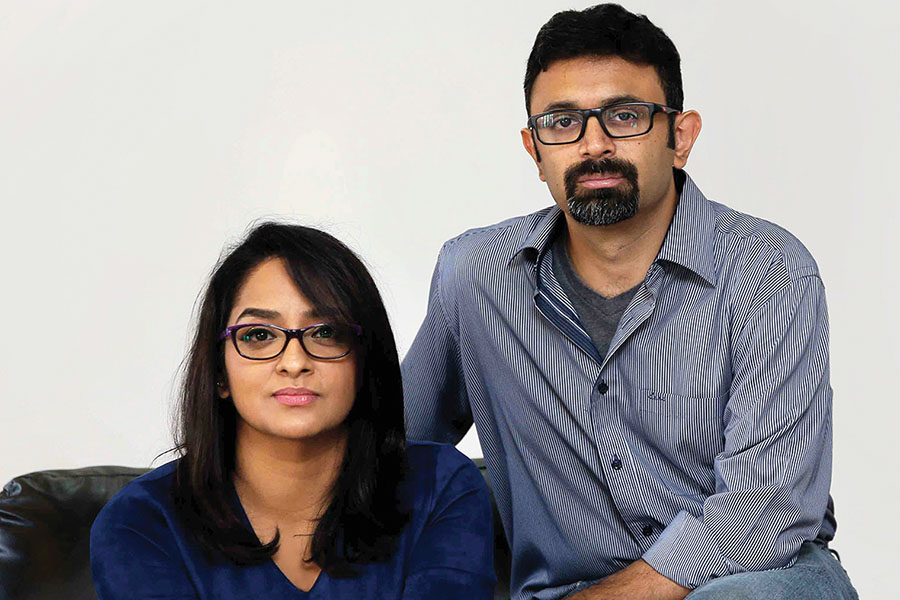 What happens when a market savvy product and design specialist comes together with a neuroscientist? A company called Mad Street Den. The birth of the name “involved a lot of drinking, so I will not go there,” jokes Ashwini Asokan, CEO, who co-founded it with her husband Anand Chandrasekaran, and their colleague Costa Colbert. But it also stems from discussions around “mind-abled devices”, and one such discussion happening one night at a bar in the Bay Area in San Francisco. Mad Street Den’s first office in Chennai was also a bit of a cul-de-sac, with a small place in the basement at the end of a street, “so the name just stuck,” she recalls. 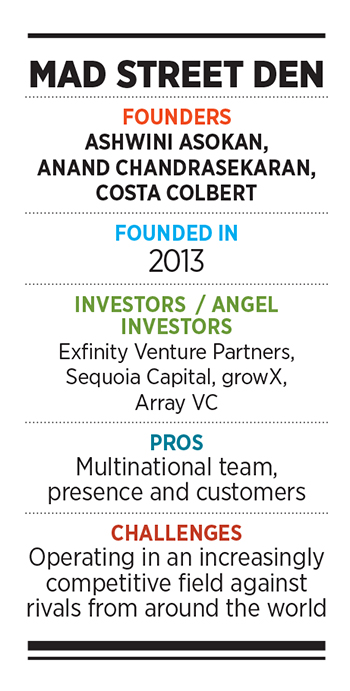 The Silicon Valley company, started in 2013, has much of its software development and R&D at its Indian headquarters in Chennai. It specialised in computer vision and AI-based software for large businesses in verticals including retail for the first several years—for example, give them a piece of clothing and they can return with multiple models, with body types, skin types and so on, for the human form covered with that clothing.

“We have been talking about this company for a very long time, with our vision for where AI should head and what the future should look like, specifically in the context of all things AI,” Asokan tells Forbes India. Chandrasekaran, who is the CTO, is a neuroscientist and comes from an academic research background. Asokan brings the business application perspective including products and design. Before starting Mad Street Den, she worked at Intel for some 10 years.

Both had issues with the way AI was developing, be it at the academic end of the spectrum, often funded by government interests in applications in defence, or at the commercial end where big tech companies were looking at narrow interests of what they could do with AI for consumers or customers.

Therefore, the wife-husband team was interested in how to make AI much more accessible to everyone. “Is AI meant to be in the hands of a few, or should the very creation of AI be in the hands of everyone?” Asokan asks. In practice, this meant “pursuing the holy grail of building a generalisable AI platform”, regardless of which sector it is applied to. Today, Mad Street Den can organise data, clean it up, get different applications that use the data to talk to each other, surface the most relevant information and help customers to take more informed decisions. And it can do this irrespective of the vertical. “We have taken that first step towards building that system that can apply AI in a much more general form across industries.”