Just as they did when they ruled most of Afghanistan in the late 1990s, the Taliban seem intent on ruling not strictly by decree, but by inference and intimidation 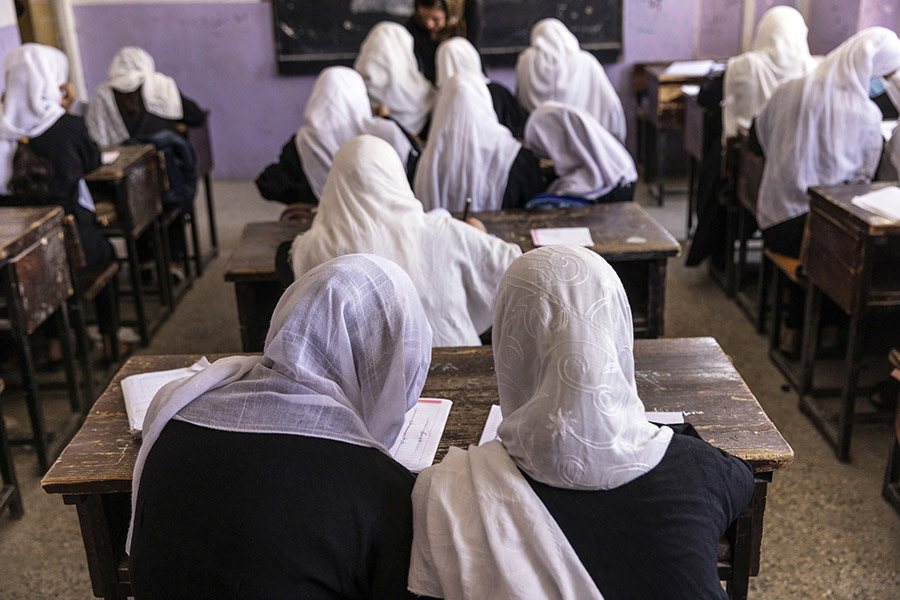 Girls attending class at a school for girls in Kabul on Wednesday, Sept. 15, 2021. Afghanistan’s new government is likely to severely restrict education for girls and women despite the Taliban’s claims that schooling will eventually resume. last week. (Victor J. Blue/The New York Times)
KABUL, Afghanistan — The director of a girls’ school in Kabul desperately wants to learn details of the Taliban’s plan for girls’ education. But she can’t attend the weekly Taliban committee meetings on education. They are for men only.

“They say, ‘You should send a male representative,’” the director, Aqila, said inside the Sayed Ul-Shuhada High School, which was shattered in May by a terrorist bombing that killed scores of girls.

But Aqila and other Afghan educators don’t need to attend meetings to comprehend the harsh new reality of education under Taliban rule. The emerging government has made clear that it intends to severely restrict the educational freedoms enjoyed by many women and girls the past 20 years.

The only question is just how draconian the new system will be, and what type of Islamic-based education will be imposed on both boys and girls. Just as they did when they ruled most of Afghanistan in the late 1990s, the Taliban seem intent on ruling not strictly by decree, but by inference and intimidation.

When schools reopened Saturday for grades seven through 12, only male students were told to report for their studies. The Taliban said nothing about girls in those grades, so they stayed home, their families anxious and uncertain about their future. Both boys and girls in grades one through six have been attending schools, with students segregated by gender in the higher three grades.

When the Taliban were in charge from 1996 to 2001, they barred women and girls from school. After the U.S.-led invasion toppled Taliban rule in late 2001, female students began attending schools and universities as opportunities blossomed. Women were able to study for careers in business and government, and in professions such as medicine and law.

By 2018, the female literacy rate in Afghanistan reached 30 percent, according to a new UNESCO report.

But the Taliban swept back into Kabul and seized power on Aug. 15, and since then they have said they will impose their severe interpretation of Shariah law.

The new government has said that some form of education for girls and women will be permitted, but those parameters have not been clearly defined by Taliban officials.

The Taliban also have indicated that men will no longer be permitted to teach girls or women, exacerbating an already severe teacher shortage. This, combined with constraints in paying teachers’ salaries and the cutoff of international aid, could have “immediate and serious” outcomes for education in Afghanistan, the UNESCO report warned.

Female students will be required to wear an “Islamic hijab,” but with the definition left open to interpretation. At a pro-Taliban women’s gathering last week, many women wore niqabs, a garment that covers a woman’s hair, nose and mouth, leaving only the eyes exposed.

“We are working on a mechanism to provide transportation and other facilities that are required for a safer and better educational environment,” Zabihullah Mujahid, Taliban spokesperson and the acting deputy minister of information and culture, said Monday, adding that classes for girls in grades seven and above would resume soon.

“There are countries in the region that have committed to help us in our education sector,” he said. “This will help us in providing better education to everyone.”

While many girls and women in Kabul have embraced Western standards of women’s rights and opportunities, Afghanistan remains a deeply conservative society. In the countryside, even if all women do not necessarily welcome Taliban rule, many are accustomed to customs that kept them at home to cook, clean and raise children even before the Taliban took power in the 1990s.

The acting minister of higher education last week said that women could continue to study in universities and graduate programs, as long they were in gender-segregated classrooms, but on Friday, the new government sent an ominous signal of its intentions. The Ministry of Women’s Affairs compound was converted into offices for the religious morality police, who brutally enforced the militants’ interpretation of Shariah law two decades ago. The building now houses the Ministry of Invitation, Guidance and Promotion of Virtue and Prevention of Vice.

Female teachers, administrators and students have been bracing for austere new restrictions. Many say they have begun wearing niqabs and preparing classrooms to accommodate classes strictly segregated by gender. (Many schools also taught boys-only and girls-only classes under the U.S.-backed government.)

“I started wearing the niqab from the first day of the coming of the Taliban,” said Parisa, who works at a school in Kabul. She said she did not want to give the Taliban an excuse to shut down the school.

“We will wear it, but we don’t want to stop educating,” Parisa said.

The Times is referring to Parisa by only her first name, and the other teachers and students by nicknames or their given names, to protect their identities.

Parisa’s attempts to learn details of the new Taliban curriculum have gone nowhere, she said. She and other teachers said they had been told only to continue teaching the current curriculum until the Taliban completes its own version.

“Women are half of our society — their role is important in all parts of life,” Parisa said. “But the Taliban are not speaking to women.”

For female students, the sudden end to their academic freedoms has been both traumatizing and paralyzing. Many say the joy and anticipation they once felt when entering classrooms has been lost, replaced by fear and a surpassing sense of futility.

Zayba, 17, survived a devastating bombing at her school in May, for which no group took responsibility, although similar attacks have been attributed to the Islamic State-affiliated group operating in Afghanistan.

Zayba stopped attending school after the Taliban takeover, which she said had robbed her of all motivation. “I like to study at home,” she said. “I am trying to, but I cannot, because I don’t see any future for myself with this regime.”

Sanam, Zayba’s 16-year-old schoolmate, underwent two operations to repair injuries from shrapnel that tore into her the day of the bombing.

On Aug. 15, she was taking an exam; she wants to be a dentist. When she returned home, she learned that the Taliban had seized political power.

“I thought of the explosion, and I thought they would come and kill every student,” Sanam said.

She is still in a state of shock. “I can’t concentrate in my studies,” she said. “When we think about our future, we can’t see anything.”

When Sanam heard that boys were returning to school Saturday, she said, she was pleased that her brother was back in class. She clung to the hope that the Taliban would somehow recognize the prowess girls and women have exhibited the past two decades.

“If they learn that women can be part of this country and they can do whatever the men can, then they may allow us to go to school,” she said.

But for now, even male teachers say they are anxious and seized by dread.

A teacher at the Sayed Ul-Shuhada School said 11 of his students were killed in the May 8 bombing. “After the explosion happened, we lost our self-confidence,” he said. “The students didn’t have the motivation to go to school.”

Since the Taliban took power, morale has sunk even lower, said the teacher, whose name is being withheld to protect his identity.

“The new government says the ladies and girls cannot work in government, so that’s why they have lost their motivation,” he said. “If you were them, you would also say this situation is impossible.”

Mohammad Tariq, an administrator at a private school in Kabul, said Taliban education officials had told him at meetings he attended that the new curriculum would include “special subjects” that teachers will be required to teach. Girls will be taught by women, and boys by men, he said.

“Change will come in the books, in the Islamic books,” Mohammad Tariq said. “Certain subjects will be eliminated for girls: engineering, government studies, cooking, vocational education. The main subjects will remain.”

Mujahid, the Taliban spokesperson, denied that any specific subjects would be removed from schools’ curriculum.

For many girls, the end of their educational freedom also means shutting down their dreams. Zayba, the 12th-grader, said she had planned since childhood to study for a career as a surgeon.

But last month, she said, her future seemed to evaporate.

“The day the Taliban took control, I was thinking: This is the end of life for women,” she said.

Tweets by @forbesindia
Brick&Bolt: How the uncle-nephew duo is reimagining the messy world of construction with technology
Photo of the day: What peace?