Whether the Taliban take back power by force or through a political agreement with the Afghan government, their influence will almost inevitably grow 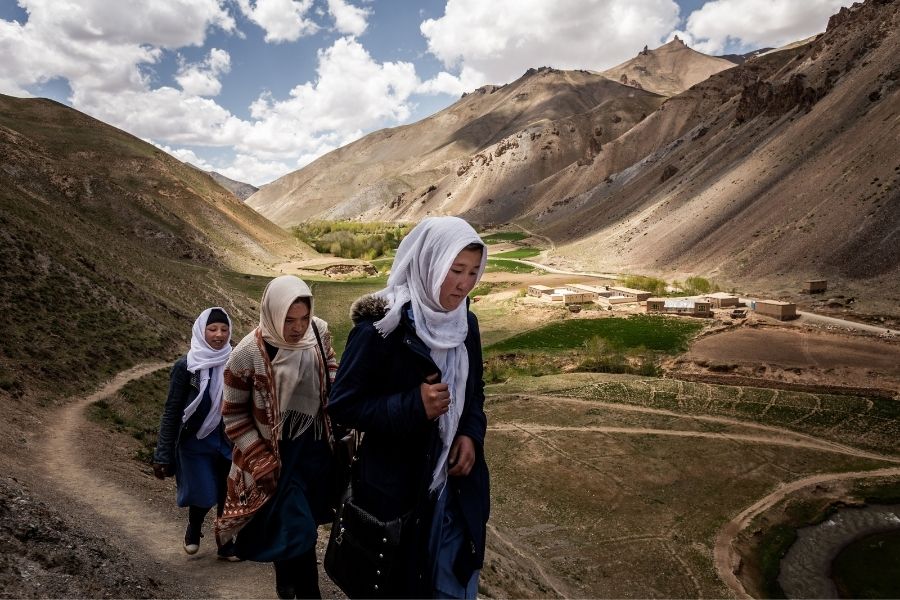 FILE - Students walk home from school in Yakawlang, Afghanistan, May 19, 2019. Whatever happens once the U.S. withdraws will not bode well for Afghan women. But even the gains made for them over the last 20 years have often been fleeting. (Jim Huylebroek/The New York Times)

KABUL, Afghanistan — Farzana Ahmadi watched as a neighbor in her village in northern Afghanistan was flogged by Taliban fighters last month. The crime: Her face was uncovered. “Every woman should cover their eyes,” Ahmadi recalled one Taliban member saying. People silently watched as the beating dragged on. Fear—even more potent than in years past—is gripping Afghans now that US and NATO forces will depart the country in the coming months. They will leave behind a publicly triumphant Taliban, who many expect will seize more territory and reinstitute many of the same oppressive rules they enforced under their regime in the 1990s.
The New York Times spoke to many Afghan women — members of civil society, politicians, journalists and others—about what comes next in their country, and they all said the same thing: Whatever happens will not bode well for them. Whether the Taliban take back power by force or through a political agreement with the Afghan government, their influence will almost inevitably grow. In a country in which an end to nearly 40 years of conflict is nowhere in sight, many Afghans talk of an approaching civil war. “All the time, women are the victims of men’s wars,” said Raihana Azad, a member of Afghanistan’s Parliament. “But they will be the victims of their peace, too.” When the Taliban governed Afghanistan from 1996 to 2001, it barred women and girls from taking most jobs or going to school, and practically made them prisoners in their own homes. After the US invasion to topple the Taliban and defeat al-Qaida in the wake of the Sept. 11, 2001, terrorist attacks, the Western rallying cry for bringing women’s rights to the already war-torn country seemed to many a noble undertaking. The cause helped sell the war to Americans who cringed at the sight of a B-52 carpet bombing insurgent positions. Some schools reopened, giving young women and girls a chance at education and careers that many before them didn’t have. But even before US troops touched Afghan soil, some women had already risked their lives by secretly pursuing an education and teaching themselves. Over two decades, the United States spent more than $780 million to promote women’s rights in Afghanistan. The result is a generation who came of age in a period of hope for women’s equality. Although progress has been uneven, girls and women now make up about 40% of students. They have joined the military and police, held political office, become internationally recognized singers, competed in the Olympics and on robotics teams, climbed mountains and more—all things that were nearly impossible at the turn of the century. As the conflict dragged on over 20 years and setbacks on the battlefield mounted, US officials and lawmakers frequently pointed to the gains of Afghan women and girls as proof of success of the nation-building endeavor—some measure of progress to try to justify the loss of life, both American and Afghan, and billions of dollars spent in the war effort. Even in the twilight weeks before President Joe Biden made his final decision to pull out all US troops by September, some lawmakers and military officials argued that preserving women’s rights was one reason to keep US forces there. “I remember when Americans came and they said that they will not leave us alone, and that Afghanistan will be free of oppression, and will be free of war and women’s rights will be protected,” said Shahida Husain, an activist in Afghanistan’s southern Kandahar province, where the Taliban first rose and now control large stretches of territory. “Now it looks like it was just slogans.” Across the country, schools are now being forced to contemplate whether they will be able to stay open.
Firoz Uzbek Karimi, the chancellor of Faryab University in the north, oversees 6,000 students—half of them women. “Female students who live in Taliban areas have been threatened several times, but their families send them secretly,” Karimi said. “If foreign forces leave early, the situation will get worse.” Human rights groups, nongovernmental organizations, schools and businesses are left trying to figure out contingency plans for female employees and students should the Taliban return to power by force or through an agreement with the Afghan government. In his announcement Wednesday, Biden said the United States would continue to prioritize women’s rights through humanitarian and diplomatic assistance. But even now, the gains for women in some places over the past 20 years have been fleeting and unevenly distributed despite the millions invested in women’s rights programs. In Taliban-controlled areas, women’s education is extremely restricted, if not nonexistent. In some areas in the country’s east and west, the Taliban have opened schools to girls who can attend until they reach puberty, and in the north, tribal elders have negotiated to reopen some schools for girls, although subjects like social science are replaced with Islamic studies. Education centers are routinely the targets of attacks, and more than 1,000 schools have closed in recent years. “It was my dream to work in a government office,” said Ahmadi, 27, who graduated from Kunduz University two years ago before moving to a Taliban-controlled village with her husband. “But I will take my dream to the grave.”

If there is one thing that decades of war have taught Afghans, it is that conflict was never a good way to achieve human or women’s rights. Since the Soviets invaded Afghanistan in 1979, war has continuously fueled more war, eventually undermining any humanitarian achievements. Under the US occupation, education opportunities, cultural shifts, employment and health care have benefited some and barely affected others, especially in rural areas. In those places, some of the war’s most brutal chapters played out with many civilians dead and livelihoods devastated. Often, women’s opinions are unclear in these parts, where roughly three-quarters of Afghanistan’s 34 million people live, and are often unreachable because of geographical, technological and cultural constraints. “Despite real improvements, Afghanistan remains one of the most challenging places in the world to be a woman,” a US government watchdog report released in February said. “U.S. efforts to support women, girls and gender equality in Afghanistan yielded mixed results.” Still, the Taliban’s harshly restrictive religious governing structure virtually ensures that the oppression of women is baked into whatever iteration of governance they bring. The Taliban’s idea of justice for women was solidified for Ahmadi when she saw the insurgents beat the unveiled woman in front of her in Kunduz province. For many other Afghan women, the government’s judicial system has been punishment of a different kind. Farzana Alizada believes that her sister, Maryam, was murdered by her abusive husband. But a police investigation of any sort took months to start, thwarted by absent prosecutors and corruption, she said. Alizada’s brother-in-law even pressured her to drop the charges by accusing her of stealing. The police asked her why she was pushing the case if her sister was dead. Domestic violence remains an enduring problem in Afghanistan. About 87% of Afghan women and girls experience domestic abuse in their lifetimes, according to a Human Rights Watch report. “I lost all the hope I have in this government. In some cases, maybe the Taliban is better than this system.” Alizada said. “No one is on my side.” Alizada’s sentiments were similarly portrayed in Doha, Qatar, at peace talks between the Afghan government and the Taliban. Despite months of negotiations, there has been little progress, especially when it comes to discussing women’s rights, which neither side has made a priority. At a separate peace conference held in Moscow in March between the Afghan government, political power brokers and the Taliban, only one woman, Habiba Sarabi, was on the 12-member delegation sent by the Afghan government. And only four are a part of the 21-person team in Doha. “Moscow—and Doha, as well, with its small number of women representatives—laid bare the thin veneer of support for genuine equality and the so-called post-2001 gains when it comes to who will decide the country’s future,” said Patricia Gossman, the associate Asia director for Human Rights Watch. But one of the gains that is almost indisputable has been Afghanistan’s access to the internet and the news media. Cellphone coverage extends across much of the country, meaning that Afghan women and girls have more space to learn and connect outside their familial bubbles and villages. The Afghan news media, too, has blossomed after large investments from foreign governments and investors, and many women have become nationally known journalists and celebrities. But even their futures are uncertain. Lina Shirzad is the acting managing director of a small radio station in Badakhshan, in Afghanistan’s restive north. She employs 15 women and fears, given the growing insecurity, that they will lose their jobs. Even some of the larger national outlets are looking to relocate employees or move some operations outside the country.
“With the withdrawal of foreign forces in the next few months, these women that are the breadwinners for their family will be unemployed,” Shirzad said. “Will their values and achievements be maintained or not?”