Major American news organisations ended up dealing directly with Qatar's government, which had cultivated a relationship with the Taliban 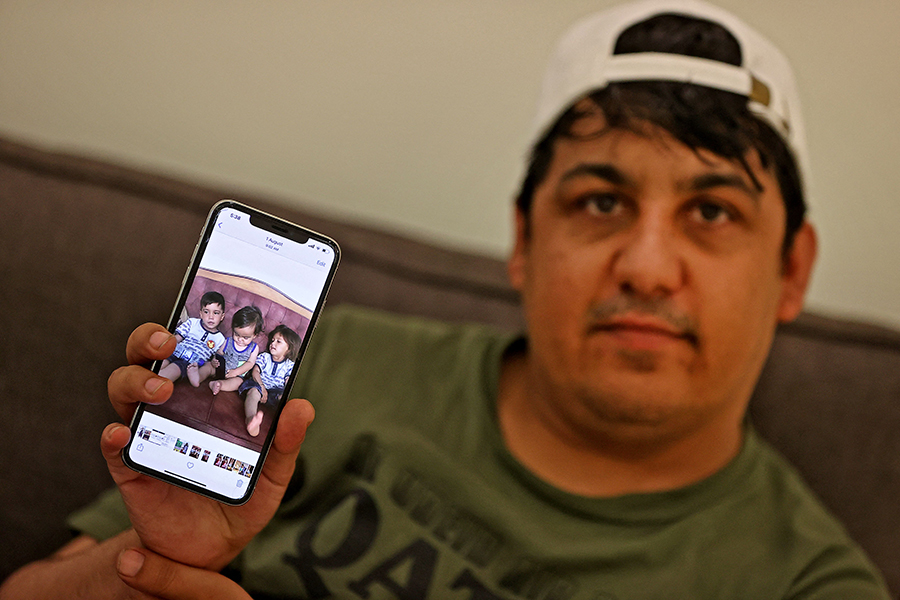 Afghan refugee Ahmad Wali Sarhadi, 28, displays a pictue of his children on his phone as he rests at his accommodation at Park View Villas, a Qatar's 2022 FIFA World Cup residence designated to host the event's guests and participants, transformed into a housing centre for Afghan refugees, in Doha, he was able to get out after he sent panicked emails to the international news media outlets he had worked for. His children remain in Afghanistan.  (Photo by KARIM JAAFAR/AFP via Getty Images)

As American news organizations scrambled to evacuate their Afghan journalists and their families last month, I reported that those working for The New York Times had found refuge not in New York or Washington, but in Mexico City.

The gist of that column was that even outlets like the Times and The Wall Street Journal had learned that the U.S. government would not be able to help at critical moments. In its place was a hodgepodge of other nations, led by tiny Qatar, along with relief groups, veterans associations and private companies.

Some State Department officials took umbrage at the idea that the U.S. government had abandoned Afghans who had worked alongside American journalists during the 20-year war. In telephone interviews last week, Secretary of State Antony Blinken and two other officials closely involved in the evacuation of journalists and many others from Afghanistan made the case to me that the U.S. exit should be seen as a success. They pointed to the scale of the operation — 124,000 people evacuated, in total — as the ultimate American commitment to Afghanistan’s civil society.

“We evacuated at least 700 media affiliates, the majority of whom are Afghan nationals, under the most challenging conditions imaginable,” Blinken said in an interview Friday. “That was a massive effort and one that didn’t just start on evacuation day.”

When it came to the government’s role, Blinken said he was referring, primarily, to the fact that the United States was able to operate Hamid Karzai International Airport, to the courage of military and State Department employees who worked there and to the decision in early August to include journalists among the “at risk” groups eligible to leave Afghanistan. (A spokesperson later called to say Blinken wasn’t trying to take full credit for evacuations.) Blinken also said the United States was still trying to bring out more Afghan journalists, particularly those who have worked for Voice of America and other media outlets funded by the U.S. government.

But people at major news organizations and others who pushed to get journalists out of the country told me they were incredulous that the United States would claim to have played a pivotal role in the exodus. And further reporting bore out their contention.

Major American news organizations ended up dealing directly with Qatar’s government, which had cultivated a relationship with the Taliban. A Qatari official said that his government had led the evacuations of people working for the Times, the Journal, The Washington Post, CBS News, NBC News, ABC News, NPR, Vice and CNN, as well as the Committee to Protect Journalists group. Several people at those organizations confirmed that account, though they spoke on the condition of anonymity because they are still trying to get other journalists out of Afghanistan.

The experience of one Afghan reporter, Ahmad Wali Sarhadi, offers a glimpse of the roles played by the United States and its allies, private organizations, nonprofit groups and sheer chance.

Sarhadi had been freelancing for Afghan television outlets, The Financial Times, The Associated Press and Der Spiegel. He also did work for a project, Salaam Times, that was funded by the Defense Department. In addition, Sarhadi had appeared on television accusing the Taliban of human rights violations in rural villages.

On the morning of Aug. 12, moments after he had filed a television report on the situation in Kandahar, he learned that the Taliban had entered the city, he said in an interview. He fled out the back of his house and lied his way through checkpoints all along a day’s drive to Kabul.

There, he sent panicked emails to the international news media outlets he had worked for and to anyone else he thought could help. The only promising response came from the Committee to Protect Journalists, a well-connected American nonprofit organization that helps journalists in the world’s trouble spots.

“You are not alone — we are going to support you,” the email said, according to Sarhadi.

“That’s an email I will never forget,” he said.

Maria Salazar Ferro, the emergencies director of the Committee to Protect Journalists, had already been putting together a list of Afghan journalists who weren’t being helped by other organizations, and her team had vetted Sarhadi’s documents.

The nonprofit’s Washington lobbyist, Michael De Dora, was also part of the effort, having taken part in conversations in July and August with State Department officials. Those talks began hopefully, and on Aug. 2 the State Department announced that it would extend to journalists a priority visa, intended for Afghans who did not work directly for the U.S. military but were nonetheless at risk.

Then, obstacles began to mount. On Aug. 5, a U.S. official using only a first name sent an email from an account staffed round-the-clock by different employees that offered an important clarification: It said that freelancers and contractors, a category of worker that made up the bulk of those working with U.S. organizations, would not be eligible for the visa. A copy of the email was shared with me by the Committee to Protect Journalists.

On Aug. 12, the Committee to Protect Journalists began sharing its list of at-risk Afghan journalists, which would ultimately grow to more than 400, with the State Department. Three days later, on Aug. 15, Kabul fell to the Taliban. On Aug. 16, the State Department reversed course and told news organizations that it would broaden the visa program to include freelancers and contractors. By then, however, it was too late to easily move journalists to third countries to apply for visas.

Sarhadi joined the dense crowd at Hamid Karzai International Airport, trying and failing to get through a gate.

On Aug. 20, Joel Simon, the head of the Committee to Protect Journalists, and De Dora met via Zoom with Uzra Zeya, the undersecretary of state for civilian security, democracy and human rights. They said they left the meeting convinced that the U.S. would do nothing to help.

They went looking for help elsewhere, and met the same day with the deputy director of the Qatari government’s communications office, Sheikh Thamer bin Hamad Al Thani. Al Thani asked for a list of the Afghan journalists it considered most in danger, then sent word that a convoy should assemble at a safe location near the Kabul airport. On Aug. 23, the Qatari ambassador to Afghanistan led 16 journalists and their families from the safe house to the airport. They flew to Doha the next day. Many of the other journalists on the list are still in Afghanistan.

“We didn’t see any policy here,” Simon said of the U.S. government’s role in the evacuation. “Our experience was that powerful media organizations were able to leverage their own relationships and use their own resources,” he said.

Others involved in rescue efforts had similar experiences, finding that formal U.S. government channels were at best useless and at worst an obstacle.

The story of evacuating U.S. journalists is a microcosm of the larger evacuation and of the wider debate over the withdrawal. Journalists, critics suggested, were too close to the story, bound up in the lives of their Afghan friends, to see the wisdom in getting out. But the correspondents on the ground were largely depicting what was in front of their eyes — both chaos, and the surprising absence of American organizational capacity.

Sarhadi, for his part, remains stuck in a housing complex built for next year’s World Cup in Doha. He is far better off than he was in the jumble outside the Kabul airport, but his next destination is uncertain.

The Qatari government is now operating some flights in the other direction. A foreign ministry spokesperson, Ibrahim Al Hashmi, told me the country now has a different task: “securing trips for foreign reporters wishing to return to Afghanistan.”

Tweets by @forbes_india
Photo of the day: Festivals > Oceans
Britain signals intent to revert to the imperial system