As the Taliban tightens its grip, fears of retribution grow

So far, the Taliban's political leadership has presented a moderate face, promising amnesty to government security forces who lay down their arms, even writing letters of guarantee that they will not be pursued, although reserving the right to prosecute serious crimes 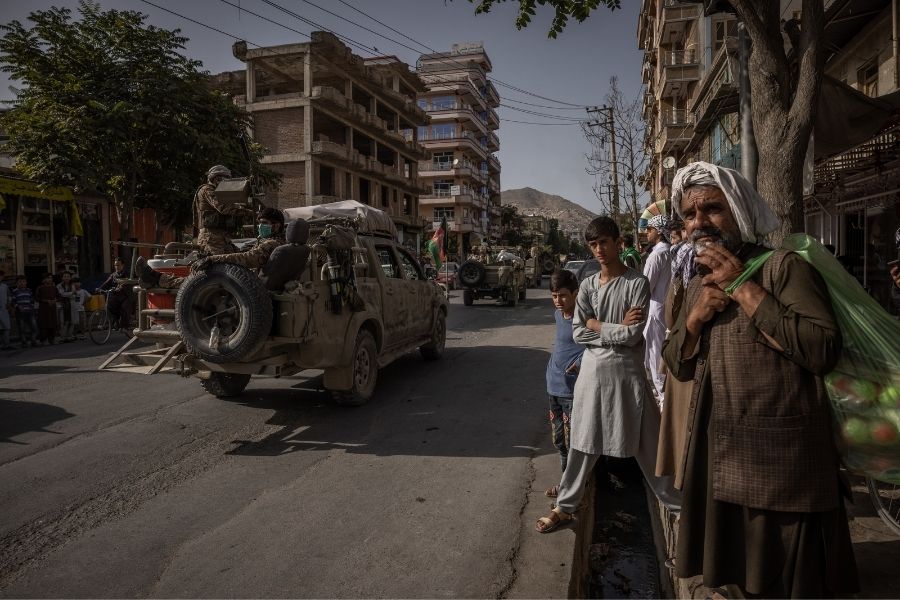 FILE — People watch a convoy of Afghan Security Forces vehicles in Kabul, Afghanistan on Aug. 16, 2021. Taliban leaders have promised amnesty to Afghan officials and soldiers, but there are increasing reports of detentions, disappearances and even executions. (Jim Huylebroek/The New York Times)

ISTANBUL — When Taliban troops seized control of the Afghan capital two weeks ago, the invading units made a beeline for two critical targets: the headquarters of the National Security Directorate and the Ministry of Communications.

Their aim—recounted by two Afghan officials who had been briefed separately on the raid—was to secure the files of Afghan intelligence officers and their informers, and to obtain the means of tracking the telephone numbers of Afghan citizens.

The speed with which Kabul fell on Aug. 15, when President Ashraf Ghani fled, was potentially disastrous for hundreds of thousands of Afghans who had been working to counter the Taliban threat, from prominent officials to midlevel government workers, who have since been forced into hiding.

Few officials found the time to shred documents, and thousands of top secret files and payroll lists fell into the hands of the enemy, the two officials said.

As U.S. troops complete their withdrawal by their Tuesday deadline, much of the nation is cringing in fear in anticipation of coming reprisals.

So far, the Taliban’s political leadership has presented a moderate face, promising amnesty to government security forces who lay down their arms, even writing letters of guarantee that they will not be pursued, although reserving the right to prosecute serious crimes. Spokespeople for the Taliban have also talked of forming an inclusive government.

A Taliban spokesperson, Suhail Shaheen, said in a Twitter post in English that there was no settling of scores nor was there a hit list with which the Taliban were conducting door to door searches, as has been rumored.

“General amnesty has been granted,” he wrote, adding that “we are focusing on future.”

Yet there are growing reports of detentions, disappearances and even executions of officials at the hands of the Taliban, in what some current and former government officials describe as a covert and sometimes deadly pursuit of the Taliban’s enemies.

“It’s very much underground,” said one former legislator who was in hiding elsewhere when the Taliban visited his home in the middle of the night.

“That is intimidation,” he said. “I feel threatened and my family is in shock.”

The Taliban swept into towns and districts, often without a shot fired, making diplomatic assurances to their opponents and the public. But the first commanders have often been replaced by more heavy-handed enforcers who conduct raids and abductions, officials of the former government said.

The scale of the campaign is unclear since it is being conducted covertly, nor is it clear what level of the Taliban leadership authorized detentions or executions.

The people who seized the files at the National Security Directorate and the Ministry of Communications may not have even been Taliban: the men did not speak Afghan languages, the officials said, and may have been agents of Pakistan’s military intelligence agency working in tandem with Taliban forces. Pakistan’s Inter-Services Intelligence agency has long supported the Taliban in their violent opposition to the Kabul government.

The fear among Afghans is palpable. All but the youngest remember the Taliban’s authoritarian regime of the 1990s, with its draconian punishments, hangings and public executions.

Many people have gone into hiding, changed their locations and telephone numbers, and broken off communications with friends and colleagues.

“People do not trust the Taliban because of what they did previously,” said an Afghan who worked as a translator for the NATO mission and was among those evacuated.

Human rights organizations, activists and former government officials have also struggled to comprehend exactly what is happening across Afghanistan’s vast and mountainous terrain, but several government officials who remain in their posts said they were receiving increasingly frantic calls from relatives and acquaintances.

“They seem to be doing very menacing searches,” said Patricia Gossman, associate Asia director for Human Rights Watch. “It is very much police-state kind of behavior. The message is very clear.”

People in the northern province of Badakhshan have been pulled out of their homes in recent days and have not been seen since, one of the government officials said. There has been a pattern of pursuit of Afghan special operations forces personnel and commandos of the intelligence service, known as 00 units, as well as police and security chiefs across the country, he added.

Asked whether these actions and reports of killings indicated a Taliban policy or were the ad hoc revenge-taking by individuals, he said, “It’s early to judge.”

But the official said that he had received information about an internal Taliban meeting at their headquarters in Quetta, Pakistan, where leaders discussed whether to grant amnesty to some highly trained Afghan operatives. The Taliban members had decided not to let them go since they could cause trouble for the Taliban in the future.

“That worries me if this turns into a policy,” he said.

That official, like all those interviewed on the subject, asked not to be identified for fear of reprisals by the Taliban against his relatives still inside Afghanistan.

The former security police chief in the southwestern province of Farah, Ghulam Sakhi Akbari, was fatally shot on the main Kabul-Kandahar highway Friday, according to Facebook posts by activists. “Some activists have blamed the Taliban,” one wrote. “The Taliban have not said anything so far.”

It is not clear where the officials are being held or if any legal proceedings have been brought against them. In some cases, they have been reported missing by family members. In the case of the three district police chiefs in Kandahar, members of the public had demanded that the Taliban arrest the men, who have long been accused of human rights abuses, a resident said.

A group of political activists has raised concerns that some of their supporters are missing and feared abducted.

One activist, Majeed Karar, who is well known for his opposition to the Taliban, posted photographs of a district governor and a young Afghan poet whom he said had been abducted and killed in recent days. He said in a post on Twitter that he was receiving messages from friends about more killings.

The Taliban have not confirmed the detentions and, seemingly intent on avoiding international censure, have blamed some violence on other people claiming to be Taliban.

The day the Taliban captured three high-level commanders after a last pitched battle at Kandahar’s airport, townspeople began gathering in a frenzy at the stadium in the city, in anticipation of a public execution.

The spectacle, a hallmark of the Taliban regime in the 1990s, did not happen.

So far there have not been mass reprisals countrywide and the killings may prove to be cases of individual revenge, Gossman said.

Human Rights Watch established that 44 people were taken from their homes and executed in July in the town of Spin Boldak, the main border crossing to Pakistan from southern Afghanistan. Those killed were members of forces led by Abdul Raziq Achakzai, a CIA-trained operative opposed to the Taliban who was widely accused of human rights abuses.

All 44 had received amnesty letters from the Taliban, Gossman said.

Amnesty International reported that nine men, mostly local police officers, were massacred by Taliban members in July in the central province of Ghazni. Six were shot to death and three were tortured before being killed, the rights group said.

A number of former government officials have complained that even after they cooperated with the Taliban in handing over their weapons and vehicles, the Taliban have continued to harass them.

Bismillah Taban, the head of the Interior Ministry’s police criminal investigation unit under Ghani, said his assistant had handed over all of the equipment and weapons in his possession to the Taliban the day after they entered Kabul.

But he said the Taliban were still looking for him.

“The Taliban detained my former aide in Kabul, held him for five hours, tortured him to force him to reveal my hiding place,” he said from an undisclosed location. “I don’t believe their promise of general amnesty. They killed one of my colleagues after they took over the government. They will kill me, too, if they find me.”