Opening the can of unicorns

India, as of mid-August, is home to roughly 50 unicorns, half of them minted in 2021—the surge catapults it to No 3 in the world, after Silicon Valley and China—a surefire sign that the country's tech startup scene has crossed a new threshold 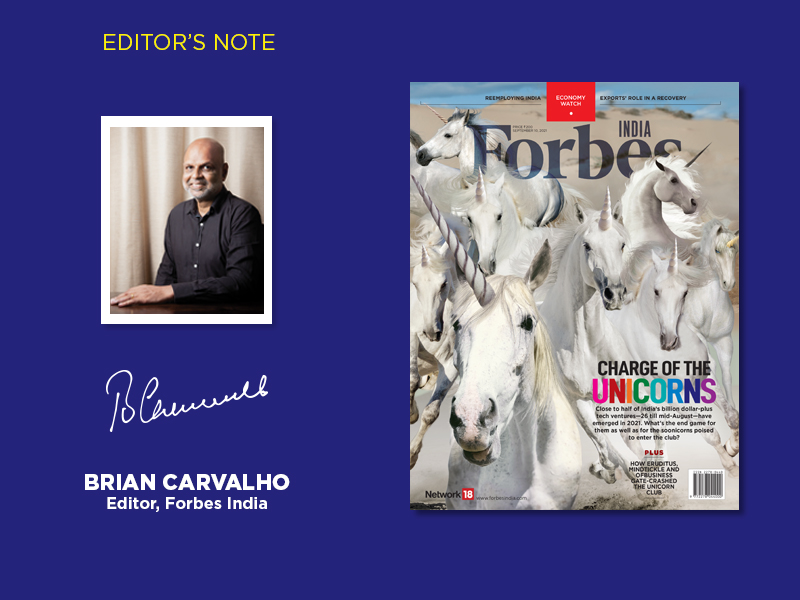 The usage of ‘unicorn’ to describe a tech company worth at least $1 billion is a coinage of the past decade, but the first of its kind may well date back to 1960s, with semiconductor giant Intel as the exclusive club’s first member. Then came Apple, Oracle, Microsoft, Google, Amazon and Facebook—a rare, once- or twice-in-a-decade phenomenon in that era—that went on to become the ‘super-unicorns’ (worth over $100 billion). It was only by the 2010s that the club opened, as the number increased to include non-American and Indian startups, too. At last count, the world had roughly 800 unicorns (as per CB Insights, a global database on internet venture funding).

India, as of mid-August, is home to roughly 50, half of them minted in 2021 (excluding buyouts and flameouts). This surge catapults it to No 3 in the world, after Silicon Valley and China (albeit, a distant third)—a surefire sign that the country’s tech startup scene has crossed a new threshold.

Aileen Lee, founder of seed stage fund Cowboy Ventures, introduced the terms unicorn and super-unicorn to the startup lexicon eight years ago to analyse the prospects of the 39 $1 billion-plus tech ventures Silicon Valley boasted till 2013.

Lee’s findings, which she put out in TechCrunch, suggested that .07 percent, or 39, of roughly 60,000 internet and software companies funded in the 2003-2013 decade went on to become unicorns. That strike rate would have shot up since, what with the US boasting over 400 unicorns as of mid-August.

Let’s do a similar, though not comparable, exercise for India now. According to tech media platform Inc42, India had some 3,436 funded tech startups in the 2014-2020 period. The number of unicorns created in that period is 34 (including buyouts and flameouts). Which would mean that just under 1 percent of India’s funded tech ventures went on to become unicorns till 2020.

The current year will improve that strike rate, what with 25 more unicorns emerging in the first eight months (till mid-August), and many more on their way. As Rajiv Singh, who has penned this fortnight’s Cover Story on the ‘Charge of the Unicorns’, points out: “Along with the increasing number of unicorns, what is also significant is the pedigree of these startups: Deeper tech (software-as-a-service, fintech and B2B), low cash burn and more often than not profitable.” For more insights on the funding surge, the robustness (and lack of it) of business models and the future for these unicorns—decacorns, super-unicorns and unicorpses.

The breathless bearing of billion-dollar behemoths, in tandem with a public issue blitz and soaring stock indices, doubtless mirrors the potential of the Indian economy and its entrepreneurs. But how reflective is it of an economy that’s trying to come to grips with the ravages of a pandemic, which may still have some legs? A Forbes India package of stories seeks to discover slivers of economic recovery across manufacturing, exports, agriculture, credit growth and jobs. The scenario is perhaps the bleakest on the jobs front, against the backdrop of the devastation wreaked on the informal sector by Covid-19. In ‘Reemploying India’, Divya Shekhar delves into what is needed to create sustainable, quality opportunities for the millions of unemployed.

How much of a role can the funds-fuelled startups play in job-creation? That’s what Mansvini Kaushik and Anubhuti Matta sought to find out in bustling sectors like edtech, fintech and healthtech. Their verdict? It may be early days yet but, over the longer term, startups and the gig economy can be a significant contributor to GDP and employment.

Tweets by @forbesindia
Special Briefing: Freshworks—marrying the art of Indian entrepreneurship and the science of Valley scaling
As the Taliban tightens its grip, fears of retribution grow