From Afghanistan to the World Cup, tiny, wealthy Qatar steps up

The gas-rich country, which has long used its tremendous wealth to punch above its weight, is having a moment in the world spotlight 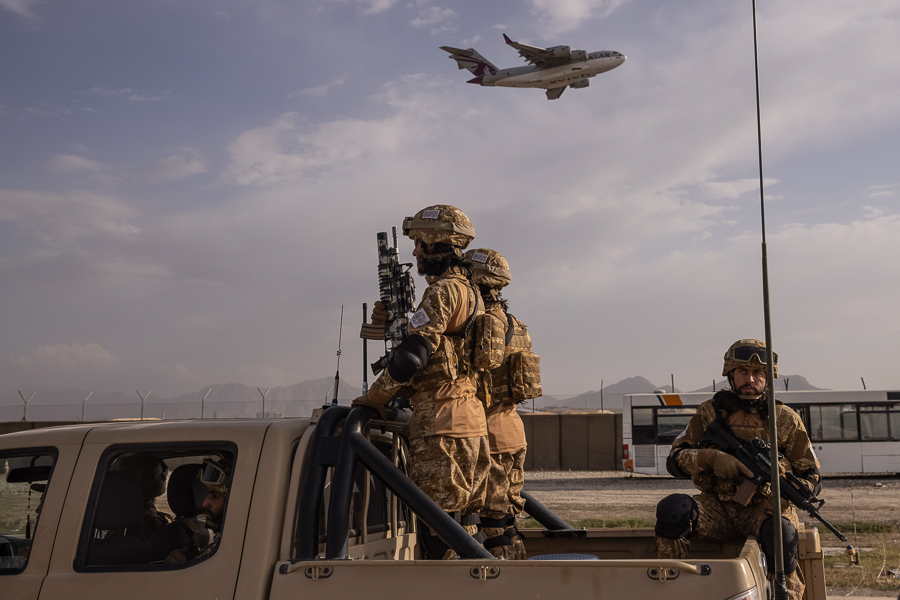 A Qatari flight takes off from the Kabul airport on Friday, Sept. 3, 2021. Since the Taliban takeover, Qatar has sent tons of aid to Kabul and worked to re-open the airport; Image: Victor J. Blue/The New York Times

DOHA, Qatar — As chaos took over the United States’ last-minute efforts to evacuate more than 120,000 of its citizens and partners from Afghanistan last month, a tiny, wealthy country that many Americans would struggle to find on a map suddenly found itself uniquely placed to help out.Qatar, a sandy, sun-baked peninsula in the Persian Gulf, received about 60,000 Americans and Afghans, more than any other country. And with its ties to both the United States — it hosts the largest U.S. military base in the Middle East — and the Taliban, it is well placed to play a strong role as an intermediary between the new Taliban-run Afghanistan and the West.The gas-rich country, which has long used its tremendous wealth to punch above its weight, is having a moment in the world spotlight.Even as it delivers tons of food and medical aid to Afghanistan and hosts the U.S. secretaries of defense and state, who flew to Qatar this week, it has made attention-grabbing news in the world of soccer, where it recently signed one of the sport’s greatest players, Lionel Messi, to the Paris Saint-Germain team it owns. The country is also set to host the soccer World Cup next year.“Qatar has always wanted to be a global player, whether that is hosting huge sports events or signing major players, or presenting itself as a regional linchpin for global politics and diplomacy,” said Michael Stephens, a senior fellow at the Foreign Policy Research Institute and an expert on Gulf politics. “They have not always got this balance right, but at the moment they seem to have taken the right initiatives at the right time.”Qatar’s help in the Afghan airlift won plaudits from President Joe Biden, and both Secretary of State Antony Blinken and Secretary of Defense Lloyd Austin arrived in the Qatari capital, Doha, on Monday, where they dined with the country’s 41-year-old monarch, Tamim bin Hamad Al Thani.“Many countries have stepped up to help the evacuation and relocation efforts in Afghanistan, but no country has done more than Qatar,” Blinken said at a news conference in Doha on Tuesday.“The partnership between Qatar and the United States has never been stronger,” he added.Standing beside him, Qatar’s foreign minister, Mohammed bin Abdulrahman Al Thani, called the United States “our most important ally.”The sunny moment, before a bank of U.S. and Qatari flags, marked a sharp turnaround in bilateral relations from the previous administration, which had initially supported a blockade against Qatar by Saudi Arabia, the United Arab Emirates, Bahrain and Egypt. Those countries, backed by President Donald Trump, accused Qatar of supporting terrorism and interfering in the internal affairs of other Arab states, accusations that Qatar denied.The blockade ended early this year, before Biden’s inauguration.Now it is Qatar’s good relations with outliers like the Taliban and Iran — relations that contributed to the accusations of supporting terrorism — that have made it invaluable as a go-between, allowing Qatar to promote what it calls “preventive diplomacy.”“Sometimes, a small size allows you actually to play exactly that role, because you are not intimidating anyone,” Qatar’s assistant foreign minister, Lolwa al-Khater, said in an interview. “It’s a small country that no one is worried about. We are not going to wage a war against anyone.”Qatar, which is smaller than Connecticut and has about 300,000 citizens, shares a huge natural gas field with Iran, whose proceeds have given its people a per capita income of more than $90,000 per year, one of the world’s highest, according to the CIA World Factbook.Qatar has used that money to bankroll and promote its view of the region — one that includes political Islamists — through Al-Jazeera, the Arab satellite network it owns, and to field the successful bid to host the 2022 World Cup. Along the way, it has maintained ties with a range of Islamist groups, including the Palestinian militants Hamas in Gaza, the Muslim Brotherhood in Egypt and the Taliban in Afghanistan.These ties have proved useful to the West, which has leaned on them to negotiate hostage releases in countries such as Syria. And Qatar hosted peace talks with the Taliban, which opened an office in Doha in 2013, with tacit permission from the United States.The Trump administration’s agreement with the Taliban setting a timetable for the U.S. withdrawal was signed in Doha last year. And since the U.S. embassy in Kabul was evacuated last month, the United States has moved its Afghan diplomatic operations to Doha.“There is no doubt that they have played their cards well,” Stephens said. “They feel that this has placed them as being a useful ally to the West and also as an interlocutor on wider regional issues, and that is what they always wanted.”In recent days, Qatar has delivered 68 tons of food and medical aid to the Afghan capital, Kabul, Qatari officials said. Qatari officials and technicians have also flown to Kabul to meet with the Taliban and work with their counterparts from Turkey on how to reopen the city’s international airport.And Qatar is using its leverage to press the Taliban to make good on its vows of moderation, al-Khater said.“We are trying to encourage the Taliban to have a more inclusive government that represents everyone,” she said. “Women representation, we are not sure about that part, if it’s going to be successful, but at least we are pushing.”

The Taliban have made public assurances that they would grant amnesty to officials and soldiers of the former government, and would allow women to work and study, activities largely banned under its previous government from 1996 to 2001, which brutally enforced a strict interpretation of Islamic law.How well they live up to those promises remains to be seen. The group has yet to name a complete government and has violently suppressed protests by women in Kabul. In other parts of the country, its fighters have been accused of going house-to-house to track down old foes.At home, Qatar is still in the throes of the evacuation.While about two-thirds of the evacuees have moved on to other countries, about 20,000 are still in Qatar, which has been providing them with food and medical care.Some of them, including Afghans who worked for media organizations such as The New York Times, have been housed in brand-new villas built for the World Cup, but most are living in al-Udeid, the sprawling U.S. military base, where crowding, heat and limited sanitation facilities have been major problems.Al-Khater said those concerns are being addressed, and that the Qatari government and associated charities have built more shelters, bathrooms and field clinics and are providing more than 55,000 meals per day.Stephens, the Gulf politics expert, said it was unclear how long Qatar would reap the benefits of its help in Afghanistan but that, like all the Gulf states, it was seeking ways to raise its standing in Washington.“They all want to be in Biden’s good book,” he said. “They know that this administration is not entirely keen on the Gulf states, so they want to present themselves as a force multiplier rather than a problem.”