Short on money, legal and otherwise, the Taliban face a crisis 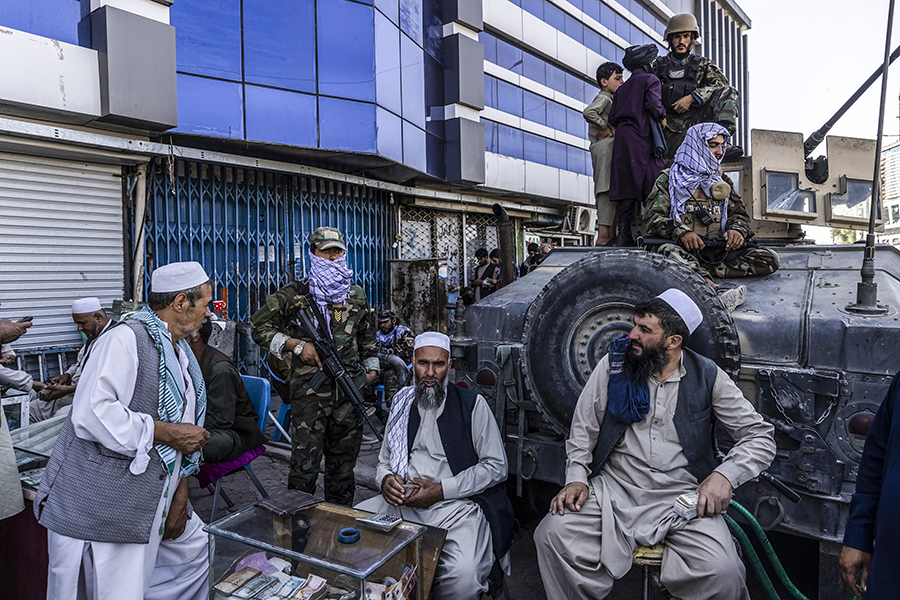 As Afghans pay surging prices for eggs and flour and stand in long lines at the bank, money changers like Enayatullah and his underground financial lifeline have found themselves in desperate demand.
Enayatullah — his family name withheld — holds down a tiny point in a sprawling global network of informal lenders and backroom bankers called hawala. The Taliban used hawala to help fund their ultimately successful insurgency. Many households use it to get help from relatives in Istanbul, London and Doha, Qatar. Without cash from hawala, economic life in whole swaths of Afghanistan would come to a crashing halt.
That is now a very real possibility. Foreign aid has dried up. Prices are surging. The value of the afghani currency is tumbling. The country’s $9.4 billion in reserves have been frozen.
And hawala will not be enough, said Enayatullah, adding that people’s need for money has become so desperate in the last week he raised his commission to 4% per transaction, about eight times his usual rate. The system is now struggling with a lack of money, leading the Taliban and dealers themselves to rein in activity to preserve cash.
“The demand,” Enayatullah said, “is too much.”
The Taliban won the war in Afghanistan and an economic crisis may be their prize. They have been cut off from the international banking system and from the country’s previous funding sources, like the International Monetary Fund, the World Bank and the U.S. government. Foreign aid makes up nearly half of economic output.
Without other sources of money, millions of Afghan people could lose the gains they made, in fits and starts, over the past two decades. Already, drought conditions have created a real risk of hunger.
“We have conflict. We have war. This is another misery,” said Shah Mehrabi, a board member of Afghanistan’s central bank. “You will have a financial crisis and it will push families further into poverty.”
Long before Afghanistan had formal institutions like banks, it had the hawala system. Millions of Afghans, shut out from formal banking, used it to send and receive remittances, as have migrant workers and others around the world.
The system functions on the premise that people want to send equivalent amounts of money between two locations. Loans and transfers are recorded on ledgers, but money does not have to change hands. Those features make it useful for evading taxes, paying bribes and laundering ill-gotten gains.
The hawala system, though central to life in Afghanistan, will not be enough on its own. While many hawala transactions exist only on ledgers, they are ultimately backed by cold, hard cash often held by hawala dealers called hawaladars. In Afghanistan, say experts, hawaladars regularly use the local currency, the afghani, to buy American dollars from Afghanistan’s central bank, a transaction that can help stabilize the afghani’s value.
But the central bank cannot access its reserves held abroad, and basic financial life in Afghanistan has gone awry. The price of flour has jumped more than 10% over the past week, while sugar and eggs are roughly one-fifth higher, said Mehrabi, citing data from the central bank.
Under the Taliban and its new central bank governor, the country’s 12 state-owned and commercial banks were ordered to open their doors Sunday. Since then, lines of people waiting to withdraw money snake around corners, interrupted only by side streets and driveways. Limits have been placed on how much each person is allowed to withdraw.
The new banking rules do not allow businesses to withdraw cash from their bank accounts, so salaries and bills are paid by transfers between accounts and also subject to limits. Many civil servants from the previous government have lost their jobs, as have the many people who were employed by the U.S. military and other foreign governments, nonprofit organizations and media companies.
When Pashtany Bank opened its doors for the first time in nearly two weeks Sunday, depositors were already waiting at the doors, said Ahmad Javed Wafa, its chief executive, who is currently in Istanbul. His bank will accommodate the daily demands of customers as long as the central bank, which stores much of its cash, can continue to make deliveries, Wafa said. But at some point the central bank will run out of cash.
Though the Taliban have kept a wary eye on hawala dealers since taking over, they may reach a deal to secure trade in exchange for new funding channels.
“The informal economy,” Wafa said, “is the only source for the Taliban to survive.”

Tweets by @forbesindia
Want a healthy BP? Kick away the salt and embrace the flavours
How will the Taliban govern? A history of rebel rule offers clues