An Unceremonious end, and a shrouded beginning

The end, at least for the Americans and their Western allies, came on a Monday after the thousands of US troops defending Hamid Karzai International Airport flew out in waves, one lumbering transport plane after another until none were left, in the final hours of the lost war 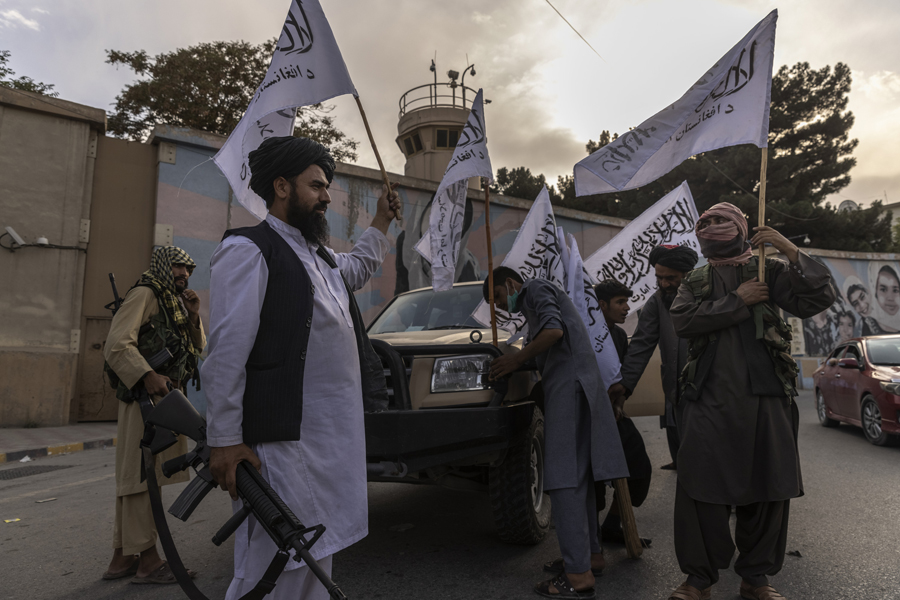 Taliban fighters wave their flag outside the U.S. Embassy in Kabul, Afghanistan, on Sunday, Aug. 22, 2021. The last American flight from Afghanistan on Aug. 30, 2021 left behind a host of unfulfilled promises and anxious questions about the country’s fate. (Victor J. Blue/The New York Times)

The end of the United States’ longest war was unceremonious — trash blowing across the single airstrip of Kabul’s international airport, Afghans lingering outside the gates, still hoping in vain for evacuation, Taliban firing victoriously into the night sky.

In its final days, it was two U.S. Marines shaking hands with Taliban fighters in the dim glow of the domestic terminal. It was lines of starved and dehydrated evacuees boarding gray planes that took them to uncertain futures. It was the Taliban’s leadership dictating their terms, as a generation of Afghans pondered the end of 20 years of some kind of expanded hope.

It was highway overpasses and park benches stretched across the United States, named in honor of the war’s dead.

The end, at least for the Americans and their Western allies, came on a Monday after the thousands of U.S. troops defending Hamid Karzai International Airport flew out in waves, one lumbering transport plane after another until none were left, in the final hours of the lost war.

Unlike the Soviets defeated before them, the Americans’ legacy was not a landscape littered with the destroyed hulks of armored vehicles. Instead, they left all the arms and equipment needed to supply the Taliban, the victors, for years to come, the product of two decades and $83 billion training and equipping an Afghan military and police forces that collapsed in the face of poor leadership and dwindling U.S. support.

Afghanistan has once more completed a cycle that has repeatedly defined the past 40 years of violence and upheaval: For the fifth time since the Soviet invasion in 1979, one order has collapsed and another has risen. What has followed each of those times has been a descent into vengeance, score-settling and, eventually, another cycle of disorder and war.

It is up to the Taliban, now, to decide whether they will perpetuate the cycle of vengeance, as they did upon seizing power from a group of feuding warlords in 1996, or will truly embrace the new path that their leaders have promised in recent days: one of acceptance and reconciliation.

Nearly 20 years have passed since Osama bin Laden and al-Qaida executed the Sept. 11, 2001, terrorist attacks on the United States, and President George W. Bush announced that the United States would invade Afghanistan as the first act in a global war against terrorism. Now, the United States is contending with how to define its relationship with the same Islamist rulers it toppled in 2001 — again a question of vengeance or acceptance — and how to try to head off the resurgence of any international terrorist threat rising from Afghanistan.

Now, there are smaller prospects of airstrikes in the Afghan countryside that leave the unnamed and faceless dead as data points in a colored bar graph of a barely read United Nations report. No roadside bombs buried in haste, in the dead of night, that might strike a government vehicle or a minibus packed with families.

Instead, there is a widespread anxiety about what the true shape of Taliban rule will be with the Americans truly gone. And there is fear that the chaotic rush of the government’s collapse during the Taliban advance could leave an unfixable economy, ruin and hunger.

The United States’ conflict in Afghanistan was a long war with a quick end, or so it seemed. But the withdrawal’s fate was set more than 18 months ago, when the Trump administration signed an agreement with the Taliban to withdraw from the country by May 1, 2021. In exchange, the Taliban agreed to stop attacking Americans, end mass-casualty attacks on Afghans in cities, and prevent al-Qaida and other terrorist groups from finding refuge in the country.

The Taliban’s leverage, earned after years of fighting the world’s most advanced military, multiplied as they captured more remote outposts and checkpoints, then rural villages and districts, then the roads in between them. By the beginning of this year, the Taliban had positioned themselves near several key cities, as the newly inaugurated Biden administration weighed whether to honor the agreement made under President Donald Trump to depart.

By the time President Joe Biden and NATO announced in April the withdrawal of U.S. and coalition forces by Sept. 11, the Taliban were already taking district after district. The Afghan security forces were surrendering or being cut down in droves. Soon, provincial capitals too were under siege, despite U.S. air power and an Afghan military that Biden and other senior officials said was nearly 300,000 strong. But in the final days, the Afghan security forces totaled around just one-sixth of that, according to U.S. officials.

Afghan troops fled more than fought, but those who were killed with their chests facing their enemy died for a cause that not even their leaders seemed to believe in.

A year ago, or 10 years ago, or 15 years ago, the Taliban were shadows in an adjacent tree line, the unseen specters who turned the ground in front of U.S., NATO and Afghan troops into a mine-laden hell. Each step posed the question of what to do if a friend in front was suddenly blown in half — the tourniquet goes here, the blood type is O positive.

Yet in the final hours of America’s war, the Taliban fully materialized, just down the road or on the other side of the gate in the country’s capital. They were suddenly everywhere, their white-and-black flags orbiting the American positions, controlling the crowd, letting the Americans end the war — but not on American terms.

Tweets by @forbesindia
The world is still short of everything. Get used to it
51% essential small business leaders losing their passion to run businesses: Adobe report