For Shashwata Narain and her sister Shobhita, Veera Health is the culmination of a strong camaraderie, and the brave common vision to build a business with impact 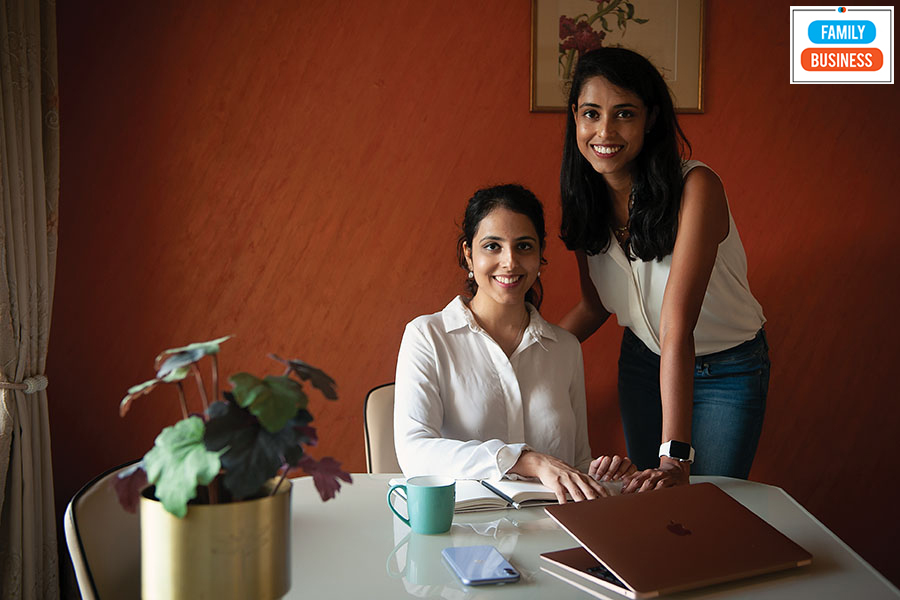 It was around 2007. Shashwata Narain was in a furious mood. Into her last class of the day, the young girl in high school was itching to teach a lesson. The bell rang, the students stepped out of the campus, and Shashwata bravely confronted a bunch of burly boys who had teased her younger sister Shobhita, a class V student of the same school in Mumbai. “Dare you mess with her,” came the bold warning from the elder sister, who was in class 12. “She is not alone.”

The sisters were inseparable during their school days. “We’re very close. We’ve done everything together,” recalls Shashwata. Studying in the same school, participating in the same extracurricular activities and having a common interest in women’s health only cemented the emotional and intellectual bond between the sisters.

Their lives and career paths, though, diverged after school. Shashwata finished her MBA from Wharton, and studied data science at Yale University. Shobhita studied biology and psychology at Tufts University. In terms of work experience too, both took different roads. While Shashwata sharpened her financial and marketing skills at Barclays Capital, Goldman Sachs, and McKinsey, Shobhita added heft to her health background by working at leading health care companies such as GlaxoSmithKline, Accenture Life Sciences and UnitedHealth. Amid all this, the warmth and care in the relationship stayed intact.

Last year, when the elder sister ran into some sort of trouble in her business venture, the younger one went mysteriously missing.

Shashwata was having a tough time with her co-founder over the issue of spreading awareness about Veera Health, a digital health startup started in August 2020. With her background in finance and marketing, she thought the best way of brand amplification was using blogs and educating women about Polycystic Ovary Syndrome (PCOS), which happened to be Veera’s first offering. The digital therapeutics platform helps women identify PCOS, and offers a comprehensive nutrition therapy, lifestyle coaching and doctor support. Her co-founder, though, vehemently differed in her approach. A digital native, she wanted to use social media to reach out to a wider section of population. 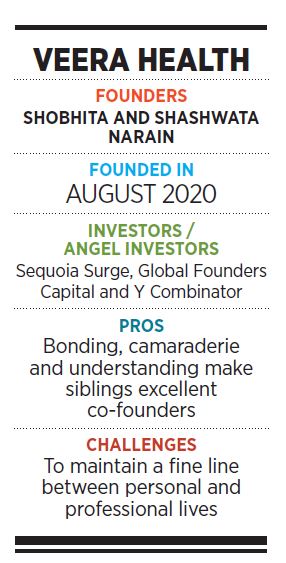 A series of discussions took place and the co-founders tried their best to make each other understand about the effectiveness of their respective solutions. Finally, Shashwata relented. “It turned out to be a wise move,” she says. A difference in opinion with the co-founder, she underlines, helped the startup find the best solution. “If I had insisted on having my way, Veera would not have managed to build awareness,” she says. Shobhita, the co-founder of Veera, smiles.

Meet the Narain sisters who have managed to blend the warmth of their personal relationship with the best of their professional experience to start Veera. The startup’s subscription-based programme offers a holistic treatment plan administered by a team of doctors specialising in PCOS, including gynaecologists, nutritionists, dermatologists and mental health experts.

In July, Veera raised $3 million in funding, co-led by Sequoia Capital India’s Surge and Global Founders Capital. The digital health startup happens to be one of the 23 firms chosen by Surge, a rapid scale-up programme by Sequoia India for startups in India and Southeast Asia. It is also backed by global tech accelerator Y Combinator.

For the backers, two things mattered most. First was the fact that the sisters have been together in handling the medical condition. And second was the business opportunity in terms of exceedingly low awareness about PCOS.

Sean Doolan, partner at Global Founders Capital, decodes the enormity of the problem. The prevalence of PCOS in India is enormous. While the common chronic condition reportedly affects 1 in 5 women in India, fewer than 30 percent are clinically diagnosed. What complicate things are a host of symptoms: From irregular periods and weight gain to mood disorders, acne and excessive body hair. “Shashwata and Shobhita bring the requisite product pedigree, operational expertise, and lived experience to help Indian women suffering from PCOS,” says Doolan. Veera, he lets on, has the potential to eventually scale beyond PCOS and address a breadth of diverse health conditions that affect all women.

The origin of Veera, though, has its roots in the painful journey that the sisters experienced for five years. Shobhita was diagnosed with PCOS when she was 22. Her agony, unfortunately, compounded over the next few years. “It took me so long to get proper medical advice to manage my condition,” she recalls. “It was extremely frustrating.” What made things worse was the prejudice and lack of awareness about the disease. “There’s definitely a lot of judgement in the Indian context,” she says, explaining how some of the customers of Veera had to endure mental pain. While some were body-shamed, others were told to get married.

“ An entrepreneur’s journey is emotionally exacting. Having your sibling as a co-founder is a big blessing.”
Shashwata Narain, CEO and co-founder, Veera Health

For the sisters, the personal experience of one became a personal experience for the other as well. “This was the biggest thing that pushed us to start together,” says Shashwata. Navigating the treatment journey brought in its wake rich insights for the duo. Shobhita, who also happens to be a subscriber of Veera, is like any other patient coming to the startup for treatment. The difficulty in sticking to a specific kind of lifestyle change—having medicines on time, following a specific diet, and other things—not only brought the sisters emotionally closer but also made them realise the things that they need to do to tackle the underlying issues. “We lived through this together, so starting Veera was a natural thing and an extension of our life,” she says.

The initial stint of the sisters as co-founders, though, was not easy. Reason: Both were conditioned to treat each other as siblings, and not business partners. “It was easy to forget that she’s my co-founder,” laughs Shobhita. The duo would crack jokes, and pull each other’s leg. “It might have been weird for our early employees,” she adds.

What helped was having clarity about their roles. “Both of us worked on clearly defined things,” says Shashwata. While she focuses on marketing, the growth side of the business, and other strategic aspects, Shobhita handles health care processes, the clinical side of things, and customer engagement. “Our skill sets are so complementary,” she adds.

Though the sisters had the right kind of skills, it’s not easy for funders to back and judge a venture run by siblings or family members. “We look for business dynamics, and not dynamics of a business run by family,” says a venture capitalist (VC), requesting anonymity. The VC, who had a terrible experience when a husband-wife venture ran into trouble a few years back because of personal issues, still shies away from backing such companies. While conceding even unrelated co-founders can have issues, the funder maintains that such problems don’t rapidly descend into a disaster.

The Narain sisters, for their part, insist that when family becomes business, it only gets better and better. “An entrepreneur’s journey is emotionally exacting,” says Shashwata. Having your sibling is exactly what one would need during such a stressful journey. “For us, it has worked brilliantly,” she adds. Just because we are so close, she points out, we can push the envelope.” Looks like the sisters definitely means business.

Tweets by @forbesindia
As Russians vote, resignation, anger and fear of a post-Putin unknown
The year 1950 is the common thread binding Narendra Modi and Indian Constitution coming into force