Products that come in a pack are using technology to save lives, improve treatments 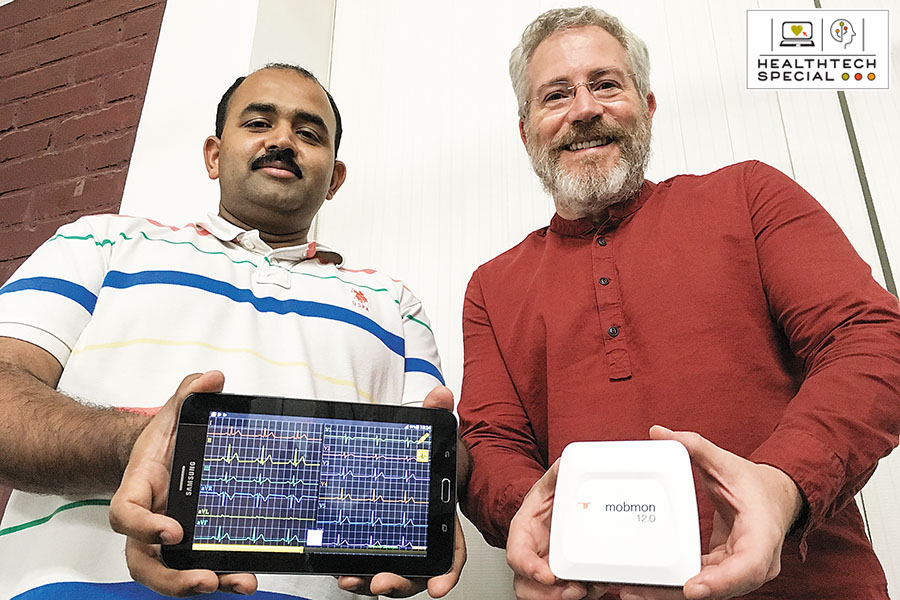 Gajanan Nagarsekar and Kevin Kreger’s Mobmon 12.0 helps patients get immediate diagnoses during cardiac emergencies
In the last few years, healthtech companies have come up with products that address problems at a primary level. From stopping the flow of blood from severe wounds, to transferring ECG readings in real-time, some of these products aim to save lives even before the patient reaches the hospital, while others use new methods that make it easier to administer medication.

According to a healthtech report by Nasscom, published in 2017, “India is a complex market, with hugely varying education levels, income levels and access to health care. Within the Indian context, access, awareness, affordability and quality are all important, and health care technologies should be implemented understanding these intricacies and need-gaps.” The report adds that startups in India are using technology to address the three main issues in health care—access and delivery, affordability, and quality.

Suresh Jayaraju, senior director, and head at 10,000 Startups (a Nasscom initiative), says, “Indian healthtech startups can definitely become a world-class company and sell their products globally; it is just a matter of time. All of them are developing products which are globally acceptable.” 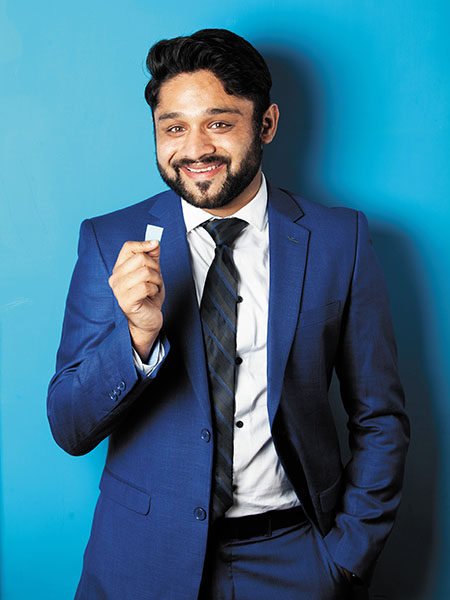 Neil Patel, director, Arrow Greentech
Image: Aditi Tailang
Reimagining the Pill
Orally soluble films are thin strips, which, when placed on the tip of the tongue, rapidly become wet with saliva, and melt to release the medication, which is then absorbed into the bloodstream directly via oral mucosa without passing through the gastrointestinal tract. These strips have the advantages of tablets (precise dosage, easy administration) and of liquids (easy swallowing, rapid absorption). Films, which are similar in size, shape and thickness to postage stamps, are a convenient alternative form of taking medicines for patients who have difficulty in swallowing pills or taking medicines in traditional forms such as injections.

Arrow Greentech Limited (AGL), manufacturers of water-soluble films, will be investing in its pharma firm Avery Pharmaceuticals, to make orally soluble films in 2019. These will be able to carry dosages of up to 100 mg. “We are going to manufacture medicated mouth-melting strips that can be delivered directly in the mouth without converting the medication into tablets, injections, syrups and so on,” says Neil Patel, director, AGL. “The challenges that we’re facing include the inability to incorporate high dosages onto the strips.”

“Pricing will be different for different products. However, if you compare the same products available as injections or tablets, our strips will have similar price points,” adds Patel. Field trial runs are expected to take place by the first quarter of 2019, and production is expected to commence by the following quarter. 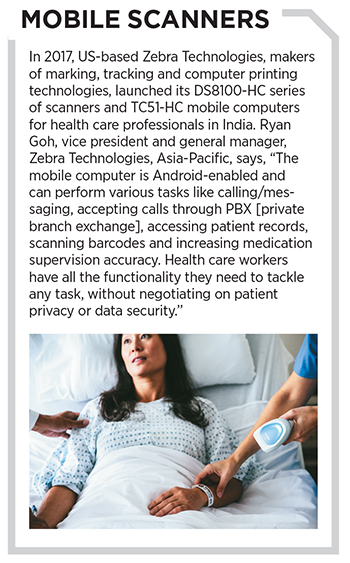 ECG on the Go
Gajanan Nagarsekar and Kevin Kreger, founders of Kallows Engineering India, have developed Mobmon 12.0 (an acronym for mobile monitoring), that aims to save lives during cardiac emergencies. “Our ultra-portable ECG machine is coupled with an Android application that can record, store and manage ECGs,” says Nagarsekar. “It can receive diagnoses from doctors in remote locations within minutes. Mobmon 12.0 also includes a pulse oximetry, which monitors a person’s blood oxygen level.”

While regular ECG reports are shared as images or PDF files, Mobmon Android application displays ECG readings in real-time. Launched in 2012, a single unit weighs less than 200 gm, and along with cables and accessories such as electrodes it weighs less than 1.5 kg. The doctor can provide instant cardiac first-aid to the paramedic who is next to the patient, and the entire communication takes place in less than 2 to 5 minutes. ECG tracings can also be accessed through a website.

“We observed two major lacunae in the ECG market: The cost of ECG machines, and the ability to have a diagnosis,” says Nagarsekar. Live transfer of ECG tracings to remote doctors is critical in ambulances so that cardiac first-aid can be administered and the patient stabilised even before reaching the hospital.

The company has got investments of $0.5 million from Sriram Natarajan, an industrialist from Goa, since 2014, and has clocked an aggregate revenue of more than ₹3 crore. Kallows’ customers include Narayana Health, Stemi India, MS Ramaiah Memorial Hospital, Express Clinics, GenWorks Health, and Apollo Hospitals. 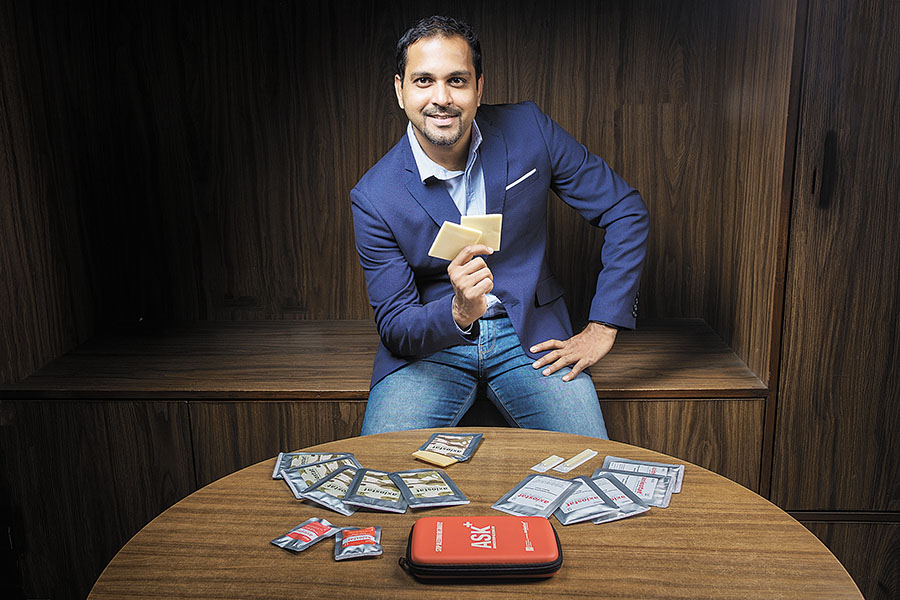 Leo Mavely with Axiostat, a non-absorbable dressing which is applied to an open wound
Image: Nishant Ratnakar for Forbes India
Sealing Wounds
As a college student, Leo Mavely was often involved in taking road accident victims to hospitals. It occurred to him, even then, how there was no solution to for a primal issue such as bleeding, which can result in death. It is common knowledge that in a medical emergency, the first hour is the ‘golden hour’ in which the victim must get basic treatment. “In most cases, they don’t get it, and it’s too late by the time they reach the hospital. This is where our product Axiostat proves to be most effective. It’s a first-aid dressing that stops profuse bleeding within just 2 to 3 minutes,” says Leo Mavely, founder and CEO of Axio Biosolutions.

When Axiostat, a non-absorbable dressing, is applied to an open wound, it reacts with the blood and turns into a sticky material that seals the wound and stops bleeding. Once the patient receives medical attention, Axiostat can be removed by simply applying water and peeling it off.

“Axiostat is created by using a biomaterial platform based on 100 percent chitosan, which is a natural biomaterial adapted for medical application,” says Mavely. “It is a technology that works on charge interactions between negatively charged blood components and positively charged Axiostat.”

Launched in 2008, it is India’s first US Food and Drug Administration-approved wound care product, and is used by the Indian armed forces and paramilitary forces, and in government and private hospitals. Funded by Ratan Tata’s UC-RNT Fund, Accel Partners and IDG Ventures, the Bengaluru-headquartered Axio Biosolutions is present in 12 other countries.