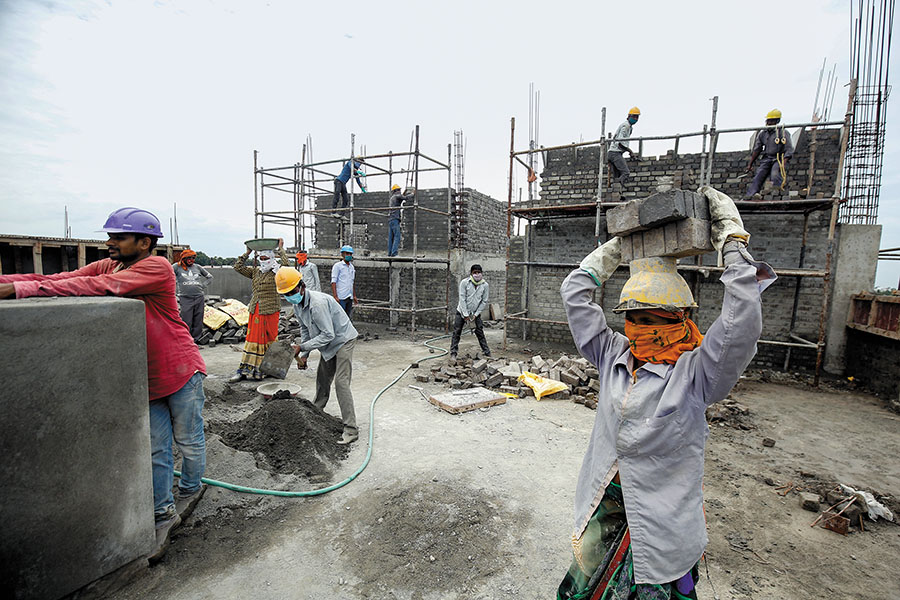 Migrant workers at an Ashiana Housing project in Chennai. Nearly 300 of their 1,500 workers returned to their villages

Raji Ali is a young man trying to remove water from his small farm, which has got flooded for the third time since the monsoons arrived this year. Ali lives in a village in Uttar Dinajpur, in northern West Bengal, which is famous for tea gardens. But Ali hasn’t always been farming. Till before the Government of India announced a nationwide lockdown in end-March, he lived at Grant Road in Mumbai, where he was a daily wage worker and earned about ₹600 per day. Life wasn’t easy, and he lived with 50 other men from his village in a rented room, which cost them ₹18,000 a month. While they all came back to their village on the first Shramik Express train, Ali and five of his friends have now decided to return to Mumbai, this time to work at a construction site in Worli.

“It is over two months that we came back home, and we asked the panchayat to give us jobs under government schemes, but there is no work available here. There is a lot of scarcity of work and wages, and we barely have anything to eat. We had sowed wheat, but the floods have ruined everything,” he says. Ali has now heard from his contacts in Mumbai that they are looking for construction workers and is trying to get a train ticket back there.

“No one is paying for our fares. We are in need of work, so some of us are going back. But most are scared of the coronavirus and don’t want to leave the village. Will you help me find a job? Or can you tell someone to provide us work in our panchayat so that we don’t have to go?”

But while Ali is trying to find his way back to the big city, there are incidences of companies in sectors such as manufacturing, textiles, construction and real estate bringing workers back from villages at their expense. For instance, in the first week of July, Ashiana Housing sent seven of its supervisors from Chennai to Bihar, Uttar Pradesh and Chhattisgarh to bring back skilled workers. It took the supervisors three to 12 days to convince the workers, and take 150 of them back to Chennai.

Although the developer had booked train tickets for them, about 30 workers refused to travel by public transport. “We sent a bus from Chennai to that village and brought them back, and the supervisors travelled with them,” says Ankur Gupta, joint managing director of Ashiana Housing. Before the pandemic, the company had more than 1,500 workers, of which nearly 300 had returned to their villages.

While Ashiana Housing is still paying wages at earlier levels of ₹500 to ₹600 per day, there are developers in Mumbai who are paying 20 percent more than before. “These wage rises are short-term; as the situation improves, they will stabilise. Other costs are also increasing, and the first thing we decided to do when the pandemic hit was to save cash; we need to be prudent,” says Gupta.

Pravin Agarwala, co-founder and CEO of Betterplace, an online platform for managing blue-collar workforces, says that even though they have not seen an increase in salaries, employers are now keen to take care of accommodation, food and medical expenses, which helps workers save more money than before.

“We spoke to almost 5 lakh people over the last two months, and roughly 80 percent of them said they would be willing to come back as soon as the situation becomes better; 30 percent said they can come back immediately if there is a job guaranteed,” he says. “Construction and manufacturing had seen the largest numbers of reverse migration, more than 50 percent. We estimate almost 10 percent of them are back.”

Although migrant workers are slowly returning to cities, the large numbers who returned to villages raise the question of whether the rural economy can support them. What are the job opportunities they can tap? And would the government be able to support them through employment schemes like the Mahatma Gandhi National Rural Employment Guarantee Act (MGNREGA)?

When the migrants began returning home in April and May, experts and policy makers assumed they would contribute to farming. It was the harvest season for the Rabi crop, and most of the workers were absorbed on farms of their own or others. As the harvest season gave way to the sowing of the Kharif crop, continued work remained available for them.

“Unemployment shot up to 24 percent in April, but it has come down since then. But now the sowing season is over and they are jobless again. With so many people vying for farming jobs, the real wages would have fallen due to oversupply of labour,” says Santosh Mehrotra, professor of economics at Jawaharlal Nehru University. According to the agriculture census of 2015-16, 68.5 percent of Indian farms are smaller than 2.4 acres, and are not able to provide work to many people.

A lot of migrants who returned to villages have been dependent on MGNREGA to earn wages. But the reverse migration has also resulted in a surge of Covid-19 cases in states where the migrants have returned to, leading to consequent lockdowns and restriction on economic activities.

According to People’s Action for Employment Guarantee (PAEG), which tracks the implementation of MGNREGA, 35 lakh new job cards have been made since April; 7.62 crore households were provided employment in April, May and June this year, compared to 5.98 crore households in 2019. This unexpected jump has meant that 43 percent of the total MGNREGA budget for 2020-21 has already been spent in the financial year’s first quarter itself.

PAEG says that currently, 1 lakh households are completing 100 days of work almost every 10 days, and this time frame should be increased to 200 days to continue supporting employment in rural areas. The data also shows that 22 percent (1.7 crore) of officially registered people have not been provided employment.

“Not everyone wants to come back to [cities] so soon but it is not surprising that many do. During the lockdown the trauma they endured would not have worn away, but they have to survive,” says Rajendran Narayanan, an assistant professor at Azim Premji University who is also associated with PAEG. “They usually have no savings and many of them might not have [ration cards]. How will they get any food?”

MGNREGA wages in some states are also lower than what some private sectors pay. For example, the MGNREGA wage in Jharkhand is ₹194 per day and in Kerala it is ₹280 per day, while a construction worker in a city makes ₹400 to ₹600 a day. “So MGNREGA does not act as an incentive for migrants to seek work in their villages. While the scheme has the capacity, we have been asking the government to increase allocations to ₹2 lakh crore and extend the number of work days to 200 from the existing 100,” says Narayanan.

KR Shyam Sundar, human resources professor at XLRI, Jamshedpur, says that other states could follow Odisha’s scheme of urban wage employment initiatives, where the state employs workers in urban projects, and reduce reverse migration. “The capacity to absorb ‘back to cities’ workers in the urban economy is limited due to micro lockdowns, which have caused considerable uncertainties in business, as well as prevented full capacity utilisation of plants especially in industries like automobiles, steel and heavy industries. We need some proactive Keynesian urban employment initiatives until we bring this pandemic under control,” he says.

But availability of jobs in urban centres would not be enough to attract workers, as the fear of Covid-19 infections still runs high. Kiran, a resident of Ramjhora village in West Bengal’s Jalpaiguri district, used to work as a construction worker in Ernakulam, Kerala, and earn ₹600 a day. For the last 28 days he has been earning ₹204 a day under MGNREGA. He says, “Even though our employers are calling us back, we are sceptical about it; the coronavirus is spreading everywhere. Maybe we will go back in November, after Durga Pujo. By then things should be better, isn’t it?”

Tweets by @forbesindia
The future of every business will be tech and data driven: Abheek Dutta
Jigsaw academy partners with IIM-Indore to launch a program on people analytics & digital HR