Evergrande's troubles have raised fears that China's residential and commercial property market, which drives up to a third of the world's second-largest economy, could crumble 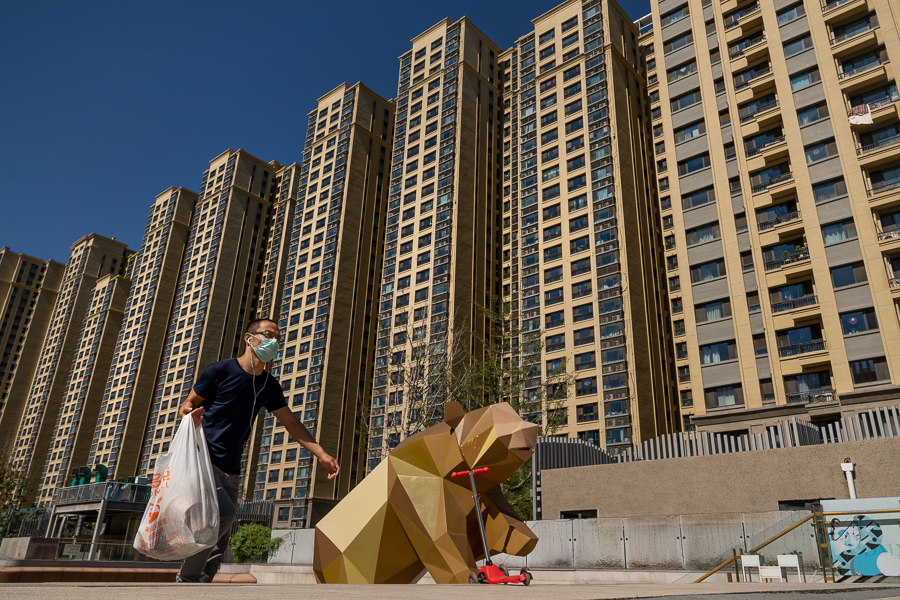 A man walks past a bear-like sculpture at Evergrande City Plaza shopping center on September 22, 2021 in Beijing, China. Evergrande, China's largest property developer, is facing a liquidity crisis with total debts of around $300 billion. The problems faced by the company could impact China’s economy, and the global economy at large; Image: Andrea Verdelli/Getty Images

Angry homebuyers are waiting on as many as 1.6 million apartments to be completed. Suppliers of cement, paint and rebar are owed more than $100 billion in payments. Workers are panicking that loans they made to their employer cannot be repaid.
Evergrande Group was once China’s most prolific developer, its cranes dotting China’s skylines. But now it is buckling under the weight of more than $300 billion in debt. What’s at stake is more than the fate of a single company: Evergrande’s troubles have raised fears that China’s residential and commercial property market, which drives up to a third of the world’s second-largest economy, could crumble.
The panic set off a global chain reaction Monday, pushing stock markets down as shares of Chinese homebuilders and large multinational companies tumbled. On Tuesday, Evergrande’s shares and bonds fell again after a dire forecast about its fate from S&P Global Ratings: “We believe Beijing would only be compelled to step in if there is a far-reaching contagion causing multiple major developers to fail and posing systemic risks to the economy.”
On Thursday, Evergrande has an $83.5 million interest payment it is likely to miss, which would cause more market turmoil.
A disorderly collapse for a company of Evergrande’s size could have ripple effects in China and beyond, including scaring off investors that have bet tens of billions of dollars on both the company and the property sector’s success.
“If we’re in this downward spiral, then without a credible intervention we are going to see an awful lot of property developers getting into trouble,” said Michael Pettis, a finance professor at Peking University.
The problem, in many ways, is one of Beijing’s making, and the effect of an Evergrande collapse will ultimately depend on what the Chinese government does.
For decades, China’s property market seemed to have no limits. Developers like Evergrande built cities from dirt, created jobs, gave the middle class something to pour its savings into and enriched local governments that sold them land. Along the way, they helped create economic growth that stunned the world.
Now, prices have become too high, and Beijing is trying to slow things down. It is also trying to send a message that no company is too big to fail.
Evergrande’s problems stem from new restrictions on home sales as Beijing tries to tame real estate prices and address rising concerns about the price of homes. The government has also sought to teach a lesson to developers who borrowed heavily in recent years to build more properties and finance investments in other businesses. (In the case of Evergrande, those interests include electric cars and a soccer team.)
The possible default of a giant like Evergrande underscores the vulnerability of China’s housing sector. If the company were to fail, some experts say, it could cause panic across China’s property sector — encompassing all commercial, industrial and residential real estate — that could become harder for Beijing to control.
Evergrande has warned it is under tremendous pressure and has hired restructuring experts to help determine its future. It has nearly 800 development projects still in progress in more than 200 cities. It has paid off some suppliers with unfinished buildings, and contractors who have yet to be paid have protested.
While market observers once took as a given that Beijing would step in at the first sign of distress, rating agencies, banks and investors have all factored in a possible Evergrande default. Many now predict Beijing will not intervene until other property developers begin to fail and pose a collective risk to the broader financial system.
“The officials still have some tools at their disposal to calm down the panic,” said Zhiwu Chen, a professor of finance at the University of Hong Kong, who predicted that the authorities would break up the company and sell its parts piecemeal. “They are under a lot of pressure to announce something soon.”
Beijing is facing two bad options when it comes to Evergrande. Regulators could step in and force state-run banks to give the company the money it needs to pay all of its suppliers, construction workers, homebuyers and employees. But other developers would keep doing the same thing, bingeing on debt and fueling an ever bigger property bubble, something that Beijing had said it is unwilling to tolerate.
Or it could walk away and let Evergrande fail completely, something it is “unwilling to do because that could result in a collapse in the economy,” Pettis said.

Beijing also has the tools to keep a lid on the social discontent brewing around Evergrande. Its censors have already taken down dozens of videos of protesters who crowded company offices in cities like Hefei and Shenzhen last week. Its police have warned employees who tried to get the attention of local officials to lay off.
But it is Beijing’s authority over the country’s banks and biggest financial institutions that provides its greatest power.
And the longer authorities wait to bail out Evergrande, the more likely other developers will suffer as investors begin to question their assumptions about the broader sector.
Just like Evergrande, other Chinese property developers have huge debt piles and are being forced by regulators to pay them off under the “three red lines” rules that aim to limit the banking system’s exposure to property.
More broadly, the property market is starting to slow, and industry practices that helped to juice sales and keep developers afloat — like preselling properties before they are completed — are coming into question. Regulators in at least two provinces announced new rules this week to crack down on illegal practices, including delays in delivering properties, misleading advertising or practices to manipulate prices.
The Hong Kong-listed shares of China’s other major developers have become the target of investor angst in recent days, as China’s stock market is on holiday. Sinic Holdings, a much smaller real estate developer, lost 87% of its value Monday before its stock was halted.
“The question is: How badly do they want to teach someone a lesson?” said Travis Lundy, an independent investment analyst in Hong Kong. “And how willing are they to have other people suffer because of that?”

Tweets by @forbesindia
Game of alliances between China and the US after Afghanistan chapter
Serial 1 Mosh/Tribute: Ultra-premium ebike from Harley-Davidson