Kids benefit from having a working mom 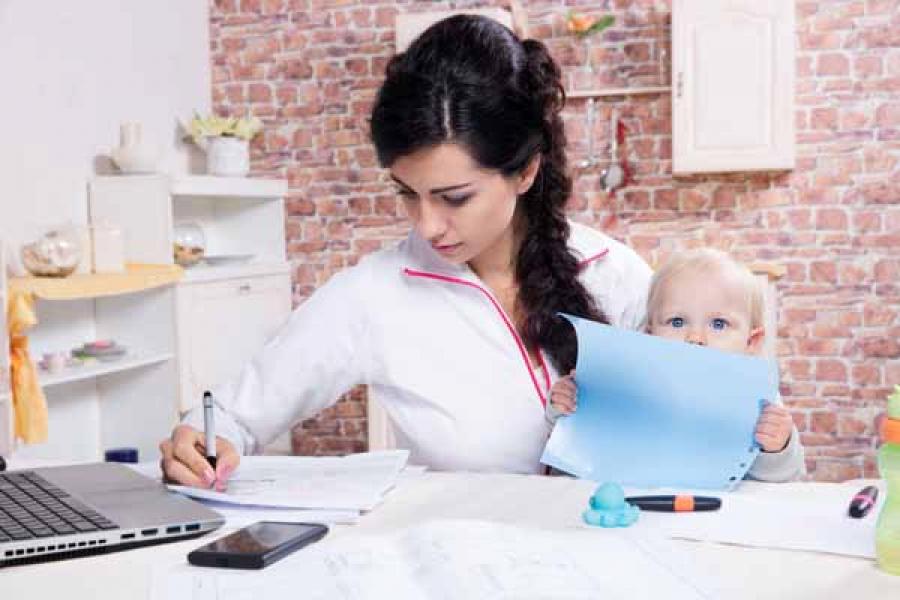 Here's some heartening news for working mothers worried about the future of their children.

The findings are stark, and they hold true across 24 countries.

"There are very few things, that we know of, that have such a clear effect on gender inequality as being raised by a working mother," says Kathleen L. McGinn, the Cahners-Rabb Professor of Business Administration at Harvard Business School, who conducted the study with Mayra Ruiz Castro, a researcher at HBS, and Elizabeth Long Lingo, an embedded practitioner at Mt. Holyoke College.

McGinn's previous research, with Katherine Milkman of Wharton Business School, found that female attorneys are more likely to rise through the ranks of a firm (and less likely to leave) when they have female partners as mentors and role models. McGinn, Castro, and Lingo wondered how nontraditional role models influenced gender inequality at home—both in terms of professional opportunities and household responsibilities.

The Global Effect of Working Moms
To gauge the global effect of working moms, the researchers dug into data from the International Social Survey Programme, a global consortium of organizations that conduct social science research, and studied 2002 and 2012 responses to a survey called "Family and Changing Gender Roles." They supplemented these data with data on employment opportunities and gender inequality across countries.

The survey included several pages of questions related to gender attitudes, home life, and career path. The researchers were primarily interested in the answer to one key question: Did your mother ever work for pay, after you were born and before you were 14?

"It didn't matter to us if she worked for a few months one year, or worked 60 hours per week during your whole childhood," McGinn says. "We weren't interested in whether your mom was an intense professional, but rather whether you had a role model who showed you that women work both inside and outside the home. We wanted to see how that played out."

The research team aimed to find out whether growing up with a working mom influenced several factors, including employment, supervisory responsibility, earnings, allocation of household work, and care for family members.

Survey respondents included 13,326 women and 18,152 men from 24 developed nations. The researchers based their analyses on responses collected from the 2002 and 2012 surveys. They categorized the countries by their attitudes toward gender equality, both at home and in the workplace.

"Liberalizing Egalitarians" were those countries where respondents' attitudes toward gender were already egalitarian in 2002 and became even more so over the following decade (Denmark, Finland, Norway, Sweden, France, Germany, and Slovenia). "Stagnating Moderates" leaned slightly egalitarian in 2002 and remained stagnant in the following decade (Israel, the United States, Great Britain, Spain, Australia, Czech Republic, Poland, Slovakia, Switzerland, Austria, Japan, and Taiwan). "Stagnating Conservatives" started off with conservative attitudes toward gender roles in 2002 and stayed that way (Chile, Latvia, Mexico, Philippines, and Russia.)

The data showed that men were just as likely to hold supervisory jobs whether or not their moms had worked outside the home. But women raised by working mothers were more likely to supervise others at work.

Effects on Income
The data also showed that while being raised by a working mother had no apparent effect on men's relative wages, women raised by working moms had higher incomes than women whose moms stayed at home full time. The one exception: women who reported conservative attitudes toward gender equality. "It's only for earnings that having conservative gender attitudes reduces the effect of a working mom," McGinn says. "For all of the rest of them, having had a non-traditional role model at home has a direct effect on the outcomes, regardless of attitudes."

As for men whose moms ever worked outside the home, they were more likely to contribute to household chores and spent more time caring for family members. "Growing up, what was being modeled for sons was the idea that you share the work at home," McGinn says.

Women spent about the same amount of time caring for family members, regardless of whether their moms worked outside the home. However, "When we segmented just for people who have children at home, we found that women who are raised by a working mom actually spend more time with their kids," McGinn says, adding that this includes women who grew up to become working moms themselves.

"There's a lot of parental guilt about having both parents working outside the home," McGinn says. "But what this research says to us is that not only are you helping your family economically—and helping yourself professionally and emotionally if you have a job you love—but you're also helping your kids. So I think for both mothers and for fathers, working both inside and outside the home gives your kids a signal that contributions at home and at work are equally valuable, for both men and women. In short, it's good for your kids."

Tweets by @forbesindia
Better days for business between India and China?
How to preserve a startup culture as a company grows