The discovery of the single-cell microorganism, taken from just a splinter of wood, was the key to recovering the formula for an elixir first brewed in Quito in 1566 by friar Jodoco Ricke, a Franciscan of Flemish origin who historians believe introduced wheat and barley to what is now the Ecuadoran capital 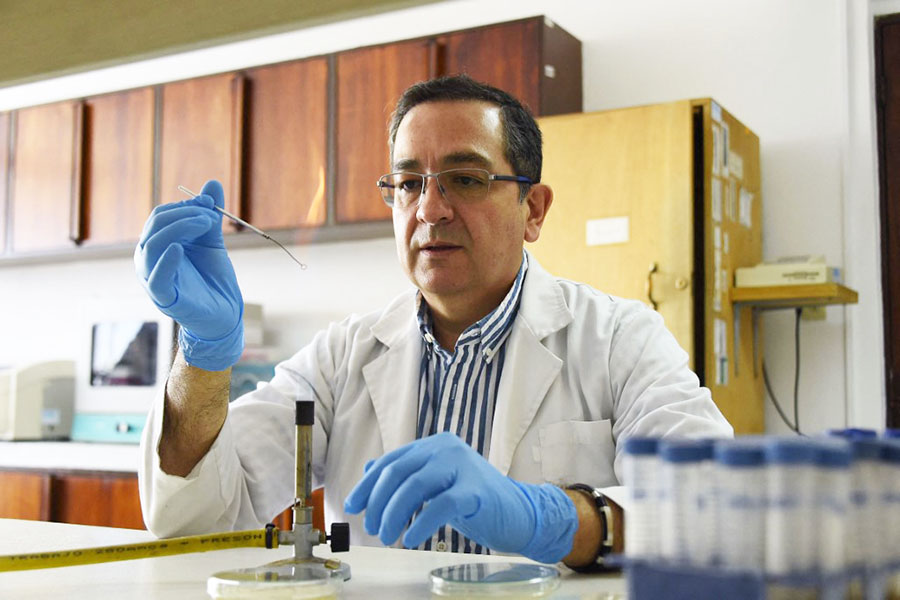 Ecuadorian scientist Javier Carvajal at a laboratory of the Faculty of Exact Sciences of the Pontifical Catholic University of Ecuador in Quito, on July 25, 2022. (Photo by Rodrigo Buendia / AFP)

Quito, Ecuador: Inside an old oak barrel, Ecuadoran bioengineer Javier Carvajal found the fungus of fortune: a 400-year-old yeast specimen that he has since managed to resurrect and use to reproduce what is believed to be Latin America's oldest beer.

That single-cell microorganism, taken from just a splinter of wood, was the key to recovering the formula for an elixir first brewed in Quito in 1566 by friar Jodoco Ricke, a Franciscan of Flemish origin who historians believe introduced wheat and barley to what is now the Ecuadoran capital.

"Not only have we recovered a biological treasure but also the 400-year-old work of silent domestication of a yeast that probably came from a chicha and that had been collected from the local environment," Carvajal told AFP.

Chicha is a fermented corn drink brewed by the Indigenous people of the Americas before Spanish colonization.

Carvajal, who already had experience recovering other yeasts, found out about the ancient Franciscan brewery in Quito while reading specialist beer magazines.

It took him a year to do so, but he finally managed to find a barrel from the old brewery in 2008.

It was stored in Quito's San Francisco Convent, an imposing three-hectare complex built between 1537 and 1680, which is now a museum.

After extracting a splinter, Carvajal used a microscope to find a tiny yeast specimen, which after a long period of cultivation he was able to resurrect.

In his laboratory at the Catholic University of Ecuador, Carvajal takes a small vial containing a variety of the Saccharomyces cerevisiaerescatada yeast.

"It lives here in a little container. It's very humble, but it is the star" of the laboratory, said the 59-year-old.

Carvajal, who comes from a brewing family, found an article in an industry magazine that vaguely described the formula for the Franciscans' 16th century drink.

Little by little, he pieced together bits of information to revive the brew with cinnamon, fig, clove and sugarcane flavors.

"There were a massive number of holes in the recipe and my job was to fill those holes," said Carvajal.

"It is a work of beer archeology within the microbial archeology" he had to carry out to rescue the yeast, which generates the majority of the drink's flavor.

After a decade of investigation and testing, Carvajal in 2018 began producing the beer at his home—but the pandemic frustrated his attempts to commercialize it.

He still has not come up with a launch date for his product, nor a price.

Carvajal compares his work, centuries after the Franciscans domesticated the yeast, to intensive care on a molecular scale.

"It is as if they were dormant, like dried seeds but having deteriorated over the years. So you have to reconstruct them, fluidize them, hydrate them and see if their vital signs return."

Historian Javier Gomezjurado, who wrote a book on Quito beverages, told AFP that the brewery in the San Francisco Convent was the first brewery in hispanic America.

It began operations in 1566, but there were just eight friars in the convent at that time and production was minimal, said Gomezjurado.

With the introduction of machinery into the brewing industry, ancient formulas began to disappear. The brewery closed in 1970.

For Carvajal, resurrecting the yeast and the age-old methods used to make the ancient recipe was simply a labor of love for "the value of the intangible."

Tweets by @forbesindia
How gig workers push back against their "digital boss"
Climate, poverty collude to torment Central America