Shivam Ginglani is making an audacious bid to stir the alcobev market. Can the whiskey underdog take on the Black Dogs of the world and find more love for whiskey? 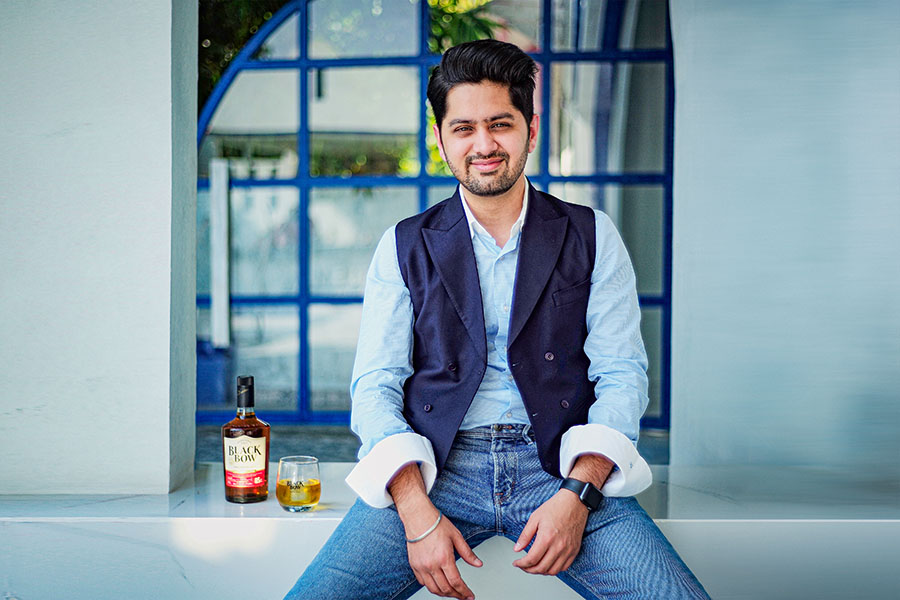 What's common among founders of a farm fresh milk startup, a yogurt brand, one of the fastest growing D2C tea brands, former Apac (Asia-Pacific) group head of the world’s largest beverage company, and a few members of the famed Onida family? All of them have made a heady move by investing in a whiskey startup brand. Early this year, Ginglani Distillers—the makers of Black Bow whiskey brand—raised close to a million dollars in a pre-Series A round from a diverse bunch of angels.

From Rohan Mirchandani (founder of yogurt brand Epigamia) to Nitin Kaushal and Chakradhar Gade (founders of Country Delight) to Bala Sarda (founder of Vahdam Teas) to Atul Singh (former Apac chairman of Coca-Cola) and Ameesha and Ayesha Mansukhani (members of the Onida Family), all of them are backing Shivam Ginglani’s whiskey venture Black Bow which rolled out in the Delhi market in February 2020, a month before the country went under lockdown.

Why are backers so excited about a whiskey startup? It looks like plain common sense. India happens to be the largest consumer of whiskey in the world. A study by London-based International Wines and Spirits Record (IWSR) in 2020 revealed that whiskey consumption in the country is about three times higher than the US. So the market is big enough to make a splash.

Ginglani, though, has a different take. “The market is ripe for disruption,” reckons the 30-year-old founder from New Delhi. Since decades, the Indian market has been dominated by legacy brands that were launched in the 90s and the subsequent decade such as Royal Stag and Blenders Pride. “There is a massive brand fatigue,” says the first-gen entrepreneur. As a result, there is a waning popularity of whiskey among the young drinkers.

Ginglani’s assessment reflects the ground reality. According to a survey by YouGuv in March, only 16 percent of urban Indians term whiskey as their favourite drink. In terms of popularity, beer and wine top the chart. Around 56 percent and 55 percent, respectively, of the respondents said they have tried it, and roughly a quarter—24 percent and 22 percent, respectively—called it their favourite alcoholic beverage. Whiskey, on the other hand, sees a preference among males, especially GenX respondents while beer finds takers among GenZ and millennials, according to the survey. There are some positives for Giglani. Though 31 percent of whiskey lovers stressed that they would stick to their favourite brand, 56 percent said they are open to trying out other options. 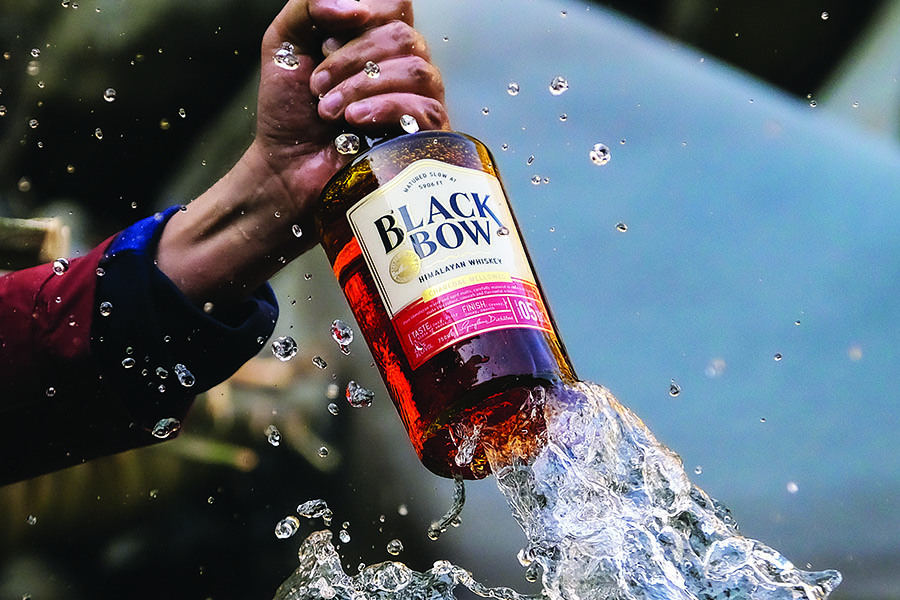 Black Bow—which is pegged as India’s first Himalayan Whiskey—is betting big on this 56 percent. “It is made with Himalayan water and five-year-old malts,” claims Ginglani, adding that Black Bow sold 9,834 cases in a month. June, he underlines, has been the biggest month for the startup brand which couldn’t take off after the launch due to the pandemic and the resultant disruption in the offline retail channels. FY22, though, recorded brisk sales. In Q1, it sold 16,000 bottles, the next quarter numbers touched the 50,000-mark, and in the third quarter, they increased to 70,000. The fourth quarter, though, posted a big spike: 1.61 lakh.

Also read: It's now possible to know what's inside a bottle of wine without opening it, thanks to AI

The sales have only gathered pace. “June was around 40 percent of FY22 volumes,” says Ginglani, adding that the brand has grown 10 times in eight months since last October. “From Rs20 lakh in October, we closed June at Rs2 crore,” he says. The brand is planning to enter Chandigarh and Punjab by the end of the year, and then look at Mumbai, Bengaluru and Hyderabad in 2023. The headroom for growth, he underlines, is massive. While the super-premium, premium and semi-premium segments are dominated by age-old players, there is a huge white space when it comes to quality homegrown Indian brands, he reckons. “Beer and gin may have evolved with the times, but whiskey has been left behind. We want to change this,” he adds.

The backers are delighted with the growth. “What is most exciting for me is the product. I knew sales would happen,” says Chakradhar Gade, CEO and co-founder of Country Delight. Gade is one of the angels that has backed the nascent whiskey brand. The country, he avers, is used to either cheap whiskey or exorbitant ones. Black Bow, Gade stresses, does not only carry an enticing price tag—Rs900 onwards—but is also made to suit the Indian palate. ”It’s a product made for Indians,” he says.

Marketing and branding experts reckon that there is enough room for new whiskey players. “India has seen a craft beer revolution over the last five years or so. But there has been nothing new in whiskey,” says Ashita Aggarwal, marketing professor at SP Jain Institute of Management and Research. The young consumers, she underlines, are open to exploring new brands and trying new flavours. The going, though, won’t be easy. The biggest reason is the time taken to develop taste and loyalty for whiskey. Unlike beer, she lets on, whiskey takes time. “One needs to have loads of patience,” she says. Second, whiskey is also a deep pocket play where the big boys will use their financial and trade muscle to take on any newbie. “Does Black Bow have what it takes to face the might of the biggies,” she asks.

Ginglani, for his part, reckons that he is playing a long game. Black Bow, the name, he shares, is inspired from the black bow tie sported by Hollywood actor Tom Hanks while delivering one of his Oscar speeches. “He is one of the biggest stars but doesn’t have an iota of arrogance,” he says, adding that Black Bow was not named to make it sound or rhyme like Black Dog. The founder, though, is quick to add that Black Bow is well poised to take on the Black Dogs of the world. “We are starting as an underdog, and we can take on any top dog,” he smiles.