Kenzo Takada and Issey Miyake became hugely influential by pursuing their passion in Paris. Left holding the torch are Yohji Yamamoto, now 79, and 80-year-old Rei Kawakubo, founder of Comme des Garcons, who shook up the fashion establishment in the early 1980s 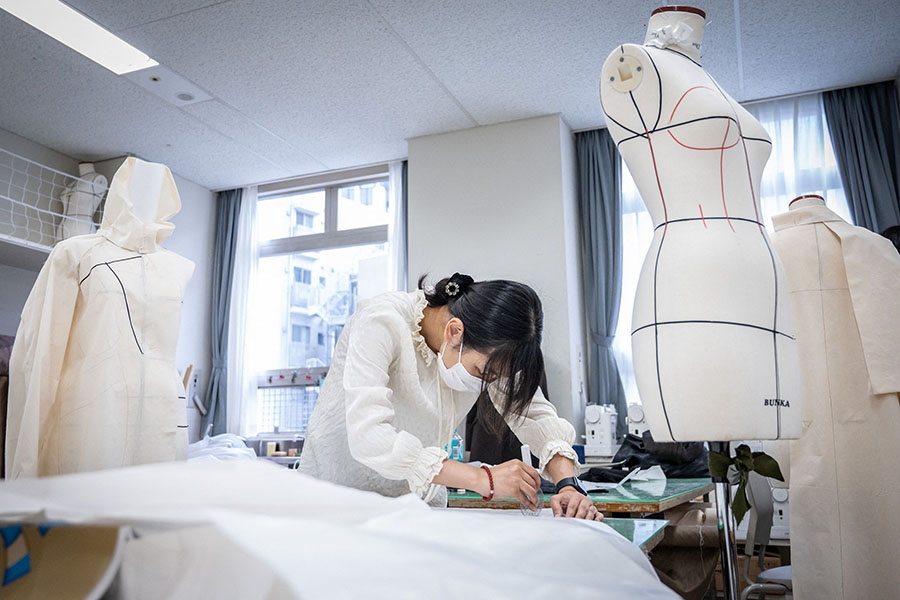 At Tokyo's prestigious Bunka Fashion College, students concentrate in silence that is broken only by the sound of scissors and sewing machines as they strive to emulate the global success of alumni like Kenzo.

The loss of greats Kenzo Takada and Issey Miyake heralds the end of a fashion era, decades after Japanese design revolutionised Parisian catwalks in the 1970s and '80s.

And the French capital remains a goal for emerging talent like Bunka graduate Takuya Morikawa, whose streetwear-inspired tailoring made its Paris Fashion Week debut two years ago.

Morikawa, 40, hopes his shows at the industry's top event will lead to "an amazing future, beyond my wildest dreams".

Before launching his label TAAKK in 2013, Morikawa spent eight years at Miyake's studio, where he worked on runway collections and the famous "Pleats Please" line, but also harvested rice and made paper to learn about traditional craft methods.

He told AFP he was saddened by Miyake's death this summer, but implored younger designers not to feel disheartened.

"We need to do our best to not let these designers' deaths impact the fashion world. If that happens, it means we're doing our job badly," he said.

One of the big names picking up the baton is Nigo, who shot to fame in the 1990s with his streetwear brand A Bathing Ape.

The designer, who also studied at Bunka and whose real name is Tomoaki Nagao, was named artistic director at Kenzo last year, after founder Takada died of Covid-19 in 2020.

Another Japanese label enjoying international success is Sacai, founded in 1999 by Chitose Abe, who was tapped as the first guest couture designer for Jean Paul Gaultier.

Kenzo and textile visionary Miyake became hugely influential by pursuing their passion in Paris, as did haute couture trailblazer Hanae Mori, who died in August.

Left holding the torch are Yohji Yamamoto, now 79, and 80-year-old Rei Kawakubo, founder of Comme des Garcons, who shook up the fashion establishment in the early 1980s.

New challenges, including the vast range of styles now available for every taste, have made it harder for emerging designers to grab global attention, according to Bunka president Sachiko Aihara.

"The world was shocked" by avant-garde Japanese design, she said, recalling how her students began to dress in black after Yamamoto launched his first monochromatic clothing line.

"But we no longer live in an era where a designer presents a collection and everyone wears it," she said at the school, whose basement archive is packed with valuable garments that students and teachers can study.

This is because of the explosion in diverse types of clothing, "not a decline in talent", stressed Aihara, adding that it was now also essential to study business to start a competitive brand.

She agrees, however, that the industry is different now.

"Looking at Virgil Abloh for Louis Vuitton, for example, I feel that now is an era of edit," with designers making modern tweaks to classic shapes and patterns, she said at her boutique in Tokyo's upscale Omotesando district.

Working in Paris, London, New York or Milan is still seen as key to succeeding for Japanese designers, said Aya Takeshima, 35, who studied at Central Saint Martins in the British capital.

She told AFP she had chosen to study abroad to "learn what I needed to become an independent designer", adding that the experience had helped her understand different perspectives.

"Honestly, I think it would be difficult" to succeed internationally while only working in Japan, she said.

"In Japan, it felt like technique was drilled into you first, while ideas and concepts... were secondary", but it was the other way around in London, Takeshima explained.

Bunka college recognises these benefits and plans to offer a scholarship for studying abroad as part of its 100th-anniversary celebrations next year.

For 21-year-old Natalia Sato, a student at Bunka, Miyake and the old guard of Japanese designers "brought a great deal of Japanese and Eastern values" to the world, including techniques inspired by "delicate" traditional craftsmanship.

"I'm worried that the foundation they built might be destroyed by their passing", but "at the same time, this is a turning point" that could provide new creative opportunities, she said.

"It's a chance for me to think about how we can create new values."