Behind the veil: The double life of Pakistan rapper Eva B

Pakistan's breakthrough rapper Eva B has racked up millions of views online, but walking through the labyrinthine streets of her Karachi neighbourhood, she is anonymous 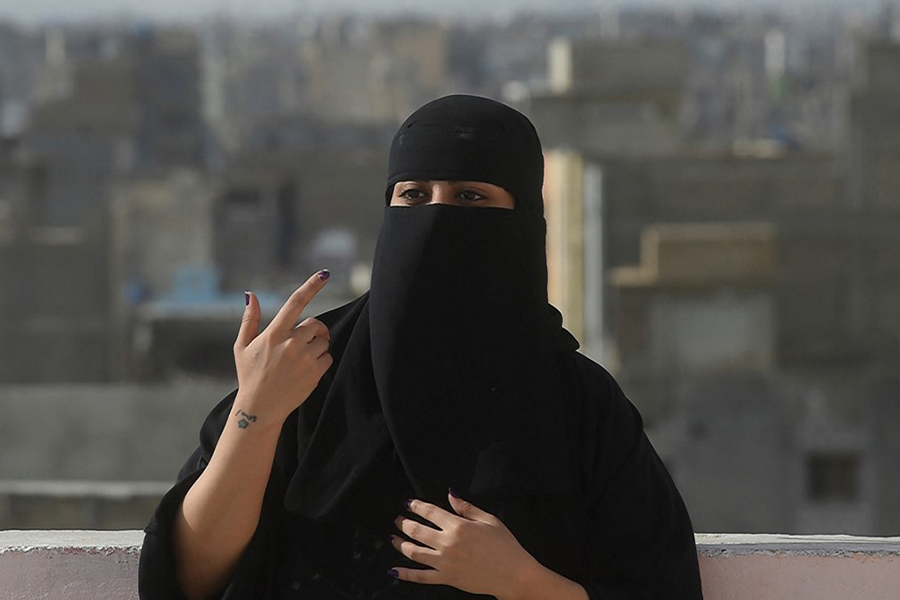 Her hair covered with a hijab and a veil falling below her eyes, she evades the attention of fans and detractors. "It's funny that people don't recognise me, they play my songs but when I'm in front of them they don't know it's me," the 22-year-old told AFP from a rooftop overlooking the mega port city of Karachi.

Inspired by American rappers Eminem and Queen Latifah, she started writing lyrics from her bedroom and posting her raps to Facebook where she built up a following.

Afraid of angering her family, she would sneak to music studios to record full tracks with the help of other emerging artists in her neighbourhood, under the pretext of studying.

But when word reached her brother, she received a backlash from her family who considered the genre indecent for a young girl and who feared she would struggle to marry in deeply conservative Pakistan.

"Later they realized that I was quite persistent, so they surrendered. They realised I couldn't be stopped," she laughed, adding that her mother now supports her in the studio and on set.

Eva B's rise to fame was accelerated this year when Coca-Cola's international music franchise Coke Studios -- one of the most popular television programmes in Pakistan -- invited her to collaborate for its 2022 series.

The music video for "Kana Yaari", which features Eva B rapping in a bright orange hijab about the betrayal of a love interest, has more than 16 million views on YouTube.

But unlike other artists in the series, she has shunned a celebrity status.

"It is strange to live two lives. People know me, but at the same time they don't really know me," she said.

She finds it amusing to nod along to conversations in cafes or at friends' weddings when people talk about the latest track from Eva B.

On rare occasions, she says people recognise her from her eyes, but she always denies her stage identity.

"I'm ok with what I am. I can't handle everybody," she says of the attention from media and fans she would otherwise attract.

Most women wear some form of hijab covering in Muslim-majority Pakistan but there are very few music artists in local pop culture who are veiled.

Turning up to studios for the first time, industry producers and managers were often left "astonished", she said.

"They reacted like 'what is this?'," she said. "But then everything soon became normal."

For Eva B, the hijab has always been a proud part of her Muslim identity -- but it has also defined her image as a rapper.

"These days I wear more stylish clothes for the music videos so I stand out. But even then I always wear my hijab," she said, adding that she sometimes swaps the face veil for a pandemic-era mask.

She has, however, grown weary of the conversation around how she dresses.

"The media has focused on my hijab rather than me... they do it for hype," she said. "It's normal in my society. Don't let it be breaking news."

What she does delight her are the stream of Instagram messages from girls and women thrilled to see a woman in a hijab represented in mainstream media.

"I feel happy that I inspire them... that they feel proud of me," she said.

But as a woman rapper in a hijab, disapproval for not being "a good girl" is never far away, she says.

Eva B grew up in Lyari, a Karachi neighbourhood haunted by gang violence and poverty for decades and once considered one of Pakistan's most dangerous areas, but which inspired a generation of artists and spawned a burgeoning hip hop scene.

With its close proximity to the sea and history of smuggling, the largely ethnic Balochi neighbourhood in Karachi stands apart for its history of violence and lawlessness - even by Pakistan's standards.

But the worst of the violence has abated, and an increase in security has led to flowering creativity.

"We didn't attend any prestigious music schools, we learned everything ourselves, driven by our passion. So I keep highlighting Lyari and I'm proud of it," she said.

The rise of hip hop in Lyari mirrors the genre's birth decades ago in New York's Bronx borough, where it largely centred around street performances and featured lyrics that addressed social ills and life in urban ghettos.

Eva B also speaks straightforwardly about the difficulties women face and the disparity in wealth in Pakistan, and even the sensitive issue of local corruption.

Her favourite song, "Bayani Rog", in her native Balochi language, tells the story of her evolution from shy, nervous teenager to the self-assured, frank woman she is today.

"I realized that keeping silent won't work, so I better speak up," she said.

Tweets by @forbesindia
Elon Musk secures funding from Sequoia, Binance to back Twitter bid
Photo of the day: Singing for Ukraine