There are around 500 prisoners in Linho, Linho prison in Alcabideche, near Cascais. Many of them are young men who have committed serious offences and have been handed sentences of 15 years or more. Around a dozen are now taking part in the dance project 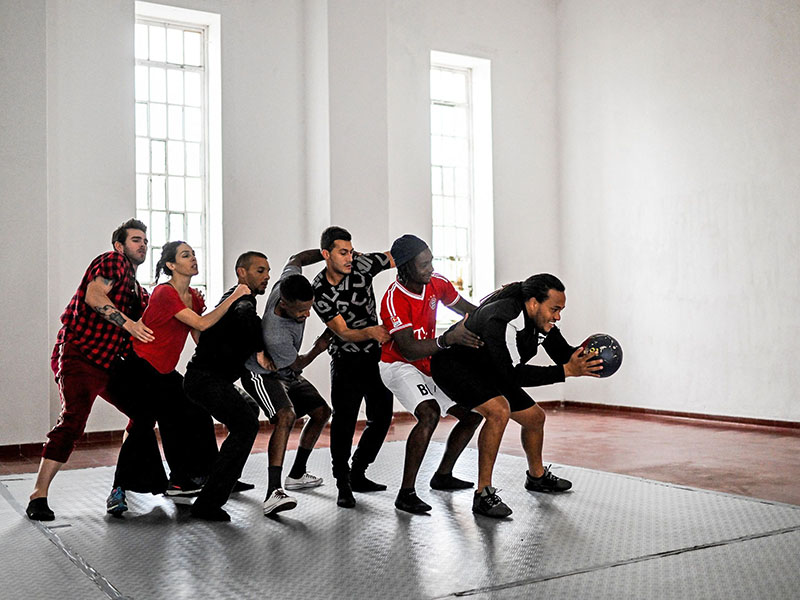 Inside a high-security Portuguese prison, six inmates are moving gracefully around in a series of improvised dance moves, clutching props and following the rhythm of the music.

Outside, the high walls of Linho prison in the western suburbs of Lisbon are lined with barbed wire and a loudspeaker barks instructions for prisoners in a metallic voice.

But in the contemporary dance studio, in a converted former chapel, inmates are dancing freely to classical music with an object of their choice: a scarf, ball, plastic bags or a light bulb.

She hopes the classes—part of a social dance project that began in April 2019—can help change the mindset of some of the young prisoners.

"When we are here, it feels like we are not in prison," says 30-year-old inmate Manuel Antunes.

"We can let ourselves go, carried by the moment and by what we feel."

There are around 500 prisoners in Linho, many of them young men who have committed serious offences and been handed sentences of 15 years or more.

Around a dozen are now taking part in the dance project.

"It would be very naive to say that artistic practice saves people," Camara tells AFP.

"But art, combined with other factors, can be decisive in changing someone's life."

She says many of the prisoners are "boys who grew up on the street and who had to fend for themselves very early."

"They messed up. Some seriously messed up, and they really need to be supported."

Fabio Tavares, 28, says he is one such person.

Never interested in contemporary dance before Camara's class, he believes it has "completely transformed" him.

"I thought it would be useless... (but) the dance and discussions that we have here help me to see things differently," he says.

The results have been positive beyond the direct impact of the classes too, according to prison director Carlos Moreira.

Also read: When the pursuit of fame runs through a Miami jail

Prisoners participating in the dance project are "more tolerant towards others" and less likely to breach prison rules, he says.

Camara hopes that because "dance offers this experience of freedom", it can help the men "prepare for the space of freedom" they will find on their release from prison.

When he has finished his sentence, Tavares plans to continue dancing and has already been offered training by choreographer Olga Roriz.

Roriz, who works with Camara, staged a performance with the prisoner-dancers last summer in Lisbon.

The dancers are now preparing for their own show inside the prison.

"Sometimes it even feels like I'm not in prison but out, in a normal dance class."