When the pursuit of fame runs through a Miami jail

Propelled by a Super Bowl's stardust and the whims of the internet, Kelly Kay Green opened her way to becoming a self-described "self-made millionaire" by way of a misdemeanor and a Miami mug shot 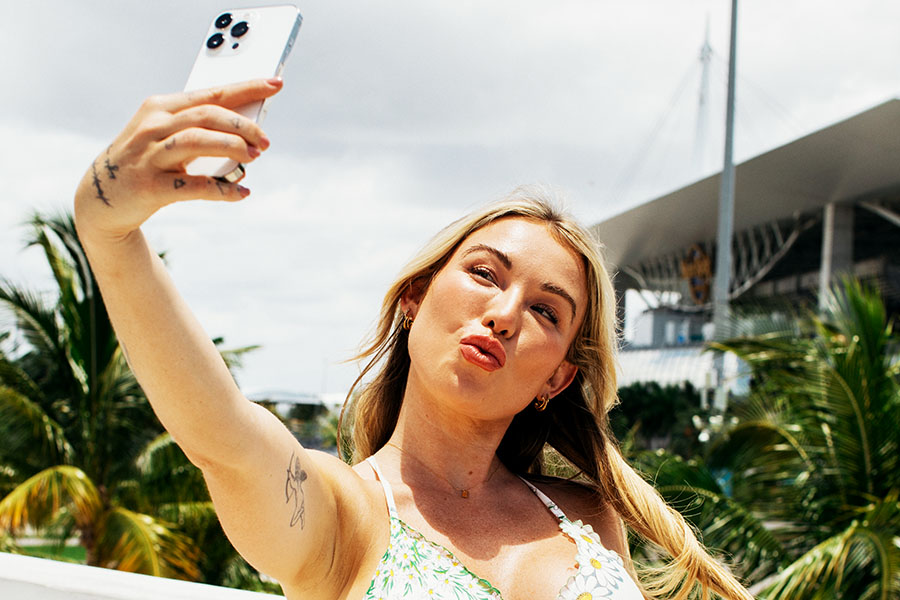 MIAMI GARDENS, Fla. — Hours after her audacious act, Kelly Kay Green peered into the jailhouse camera that was, for all she knew, her last chance to be noticed. She had gotten her lips done for this moment, fixed her makeup just so. Her eyes did not betray the distress within.

She wanted to be famous, so she had donned a specially made dress, chugged a Coors Light for courage and dropped onto the turf at the Super Bowl here in February 2020. Arrested almost instantly, she feared that her ambitions of internet celebrity would lead only to a long, cold night in lockup.

“In my head at that time, I didn’t think I had made the news,” she said recently. “I was defeated.”

But 21st-century fame is quick to come, quick to go, often premeditated and nearly always magnified in a digital world where dubious behavior and rank voyeurism collide. And so, propelled by a Super Bowl’s stardust and the whims of the internet, Green opened her way to becoming a self-described “self-made millionaire” by way of a misdemeanor and a Miami mug shot.

“I saw an opportunity to capitalize, and I saw the power of virality,” Green, who turned 30 in June, said in the dispassionate tone of an executive.

But, she added, “I genuinely don’t know why people are so intrigued by it.”

What she knew instinctively, though, was that the inexplicably compelling could prove mightily lucrative. There was money to earn and attention to seize, and those made up the surest route, in her judgment, to staying away from the Tennessee town where she had grown up and seen few opportunities.

The prospects of jail, a criminal record, shame or a ban from the NFL did not bother her. They were a part of the cost of doing business for a woman who had assumed as a child that she would never become famous so she never let herself imagine it.

But when Green lived in Los Angeles and came into the orbit of the popular and the people striving to be next, she became enchanted by the power of online fame. With people in Los Angeles mesmerized, she said, by her appearance and her Southern accent, she realized that, perhaps, she could become a brand of one.

She modeled, performed in online skits and hoped to be tagged in one post or another, but she still worried about whether she’d be able to pay her rent. When YouTube personality Vitaly Zdorovetskiy floated the idea of Green’s running onto the field during the Super Bowl, she swiftly agreed. (Zdorovetskiy did not respond to an email about Green’s assertion that they split the cost of her ticket.)

In her deliberate pursuit of fame, Green thought of everything: She selected a seat close to the field, trained with a physical therapist to stick the landing, engaged a lawyer and bought a Velcro-equipped dress she could strip away. She decided not to go nude because of the risk of a more severe prosecution and “because I am aware that there are children out there,” as she put it.

During a visit to Miami Gardens in June, she recalled how she had wanted to make it to the 50-yard line from her end-zone seat. She did not even make it to the 1.

She was not processed for hours, leaving her plenty of time to brood over the possibility that it had all been for nothing. What bothered her most while she waited was not her trespassing charge but that she would not be famous after all. An officer would not even allow her to smile for the mug shot she had so prepared for and anticipated.

After her release, though, a Daily Mail photographer was waiting. Reunited with her phone, she saw her Instagram statistics soaring. Her mug shot rocketed around the internet. Followers multiplied, ultimately hundreds of thousands of them, with many eager to pay for videos and pictures that were often at the very least suggestive. Invitations to high-profile parties arrived, too.

She ignored those who criticized the stunt, partied on, mounted an aggressive marketing effort and eventually entered a program that left her without a trespassing conviction. She was getting everything she wanted. She still hears about the Super Bowl, and she is, to this day, proud.

She stays in high-end hotels and drives a luxury SUV. She has started an agency to steer and manage other influencers. She does not regret pursuing the spotlight.

But the demons of fame, like loneliness and pressure, lurk, and she has come to resent a culture she discovered to be more transactional than she had imagined.

“All of those things that I wanted and I saw happening in LA — these events and hanging out with all of these celebrities and influencers — it looks so inviting and so glamorous, but I learned quickly that those events give me anxiety, being around people who are just asking me what I can do and how can I help them,” she said. “All of these things that Hollywood is, and will always be, that looked so appealing to me just turned me completely off from it.”

She moved back to Tennessee. She still has a copy of her mug shot.

Tweets by @forbesindia
'I have nothing left': Flooding adds to Afghanistan's woes
Photo of the day: Janmashtami 2022