'I have nothing left': Flooding adds to Afghanistan's woes

Over the past week, flash floods across eastern, central and southern Afghanistan have killed at least 43 people and injured 106 more 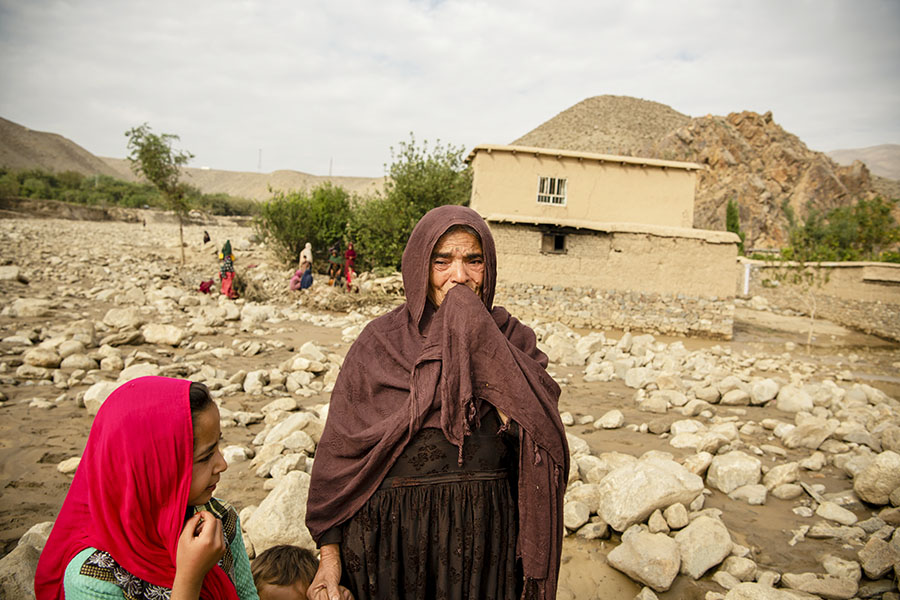 Residents after a flash flood that devastated several villages in Shinwari, eastern Afghanistan, on Aug. 17, 2022. Dilkhah, in her 60, break into tears, describing how she has lost everything she own after flash flood washed away her house. (Kiana Hayeri/The New York Times)

SHINWARI, Afghanistan — As heavy rains poured down on his village in eastern Afghanistan around 11 a.m. Monday, Meya, a 57-year-old farmer, gathered his wife and daughters and rushed from their small home toward the safety of the mountains. Looking back, he saw a thunderous wave of water tearing through the village — and his wife being swept away in the storm.

“At that moment I completely lost control,” said Meya, who goes by one name.

Days later, as he and his neighbors salvaged what they could from the wreckage, Meya stared at his destroyed village in dismay. His wife had drowned. His house was destroyed. His two cows and three goats were killed. His jewelry and all of his cash — around $400 — were washed away in the flood.

Over the past week, flash floods across eastern, central and southern Afghanistan have killed at least 43 people and injured 106 more, according to Mohammad Nasim Haqqani, a spokesperson for Afghanistan’s Ministry of Disaster Management.

The floods’ toll, local officials say, is likely to rise as more bodies are discovered. Around 790 homes have been damaged or destroyed in the flooding, which has affected nearly 4,000 families, according to the United Nations Office for the Coordination of Humanitarian Affairs.

The flooding offered the latest blow to Afghanistan, which has been seized by an economic collapse and a spate of natural disasters and deadly terrorist attacks in recent months.

Around half the country’s 39 million people are facing life-threatening food insecurity, according to the United Nations. An earthquake in June in eastern Afghanistan killed around 1,000 people and destroyed the homes of thousands more. The latest terrorist attack — on a mosque in the capital, Kabul, on Wednesday — killed at least 21 people and wounded 33 others, officials said. 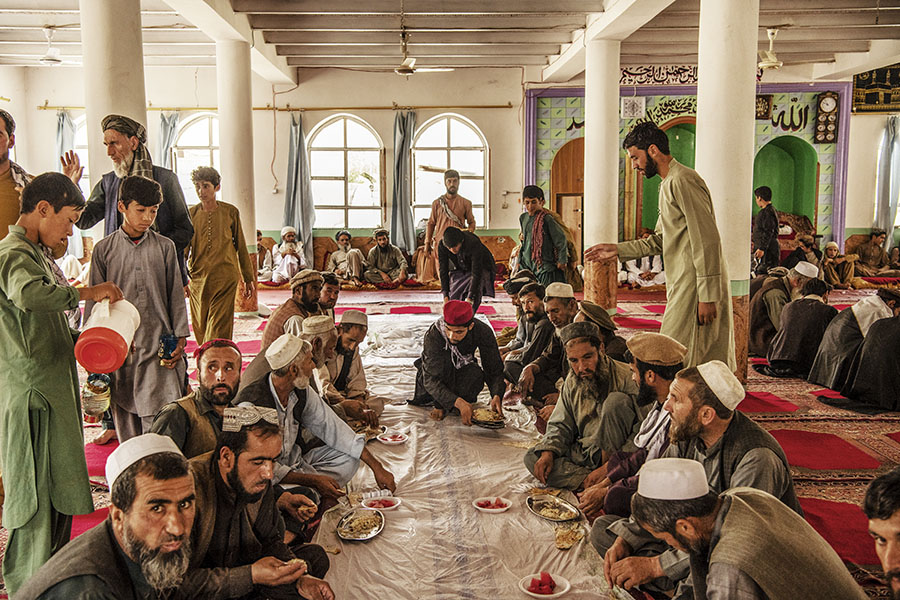 Residents hold a funeral for the four people who died in the flash floods from Tahi Qamar village, in Shinwari, eastern Afghanistan, on Aug. 17, 2022. Widespread flash floods have left more than 40 dead and 100 others injured in recent days in Afghanistan, battering a country already reeling from an economic crisis, terrorist attacks and other natural disasters. (Kiana Hayeri/The New York Times)

The back-to-back crises have tested the Taliban’s ability to provide security and badly needed emergency assistance even as their government slides further into pariah state status. The Taliban’s decision to close girls’ secondary schools indefinitely in March, and the public revelation this month that the Taliban had been sheltering al-Qaida’s leader in Kabul, have increasingly alienated the country from Western donors despite the worsening humanitarian crisis.

For millions of Afghans, the recent devastation has also underscored how even after the end of 20 years of war, a respite that many had hoped for remains out of reach.

On Wednesday morning, dozens of families gathered in Tai Qamari village, in the eastern province of Parwan, to salvage what they could from the flooding wreckage. Dozens of cattle — crucial assets for farmers here — had been washed away in the flood, along with the two bridges connecting the village to surrounding towns.

The wells that provided water to residents were filled with mud. In the courtyard of one destroyed home, apricots and berries — once a family’s garden — stuck out from the muddied earth. One woman in a blue headscarf had just returned from a neighboring village where she had gone to borrow some clothes for her children. Looking at the wreckage, she began to cry.

“My nerves are broken. My whole being is destroyed,” said the woman, who declined to provide her name.

At a mosque nearby, Hashmatullah Ghanizada, 24, gathered with dozens of others from the village to mourn the dead. Moments before floods swept through his village Monday morning, Ghanizada had been unloading bricks from his truck — part of a project to expand his small home — when it began to rain heavily. Soon he heard the sound of a flash flood tearing into the valley. 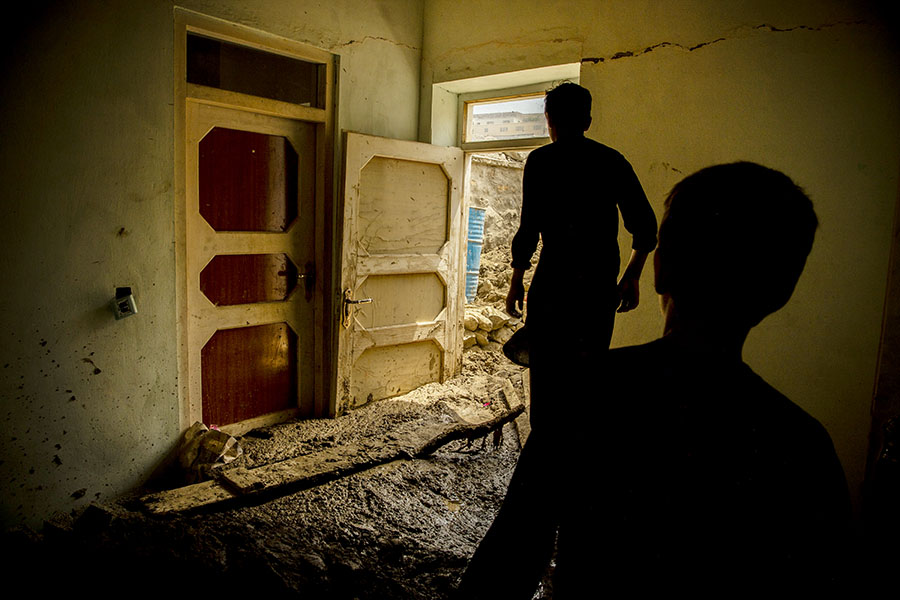 Mud inside the corridor of Saeed, 26, and his family, after a flash flood in Shinwari, eastern Afghanistan, on Aug. 17, 2022. Widespread flash floods have left more than 40 dead and 100 others injured in recent days in Afghanistan, battering a country already reeling from an economic crisis, terrorist attacks and other natural disasters. (Kiana Hayeri/The New York Times)

He joined dozens of families that scurried up a nearby mountain for safety, he said. Once the floodwater subsided, he and many of his neighbors returned to the village to collect whatever belongings — important documents, money, gold — they could.

That’s when another flash flood struck.

“I saw two people disappearing in the flood. One was a woman and the other was a boy,” Ghanizada said. “We could not have done anything else to save them. Within seconds they were gone.”

For many, the floods swept away not only their loved ones and life savings but also their livelihoods. Across the districts affected by the floods in Parwan province, hundreds of acres of orchards once packed with apricots, grapes, almonds, apples, pomegranates and peaches were destroyed by the fast flow of water, mud and stone. 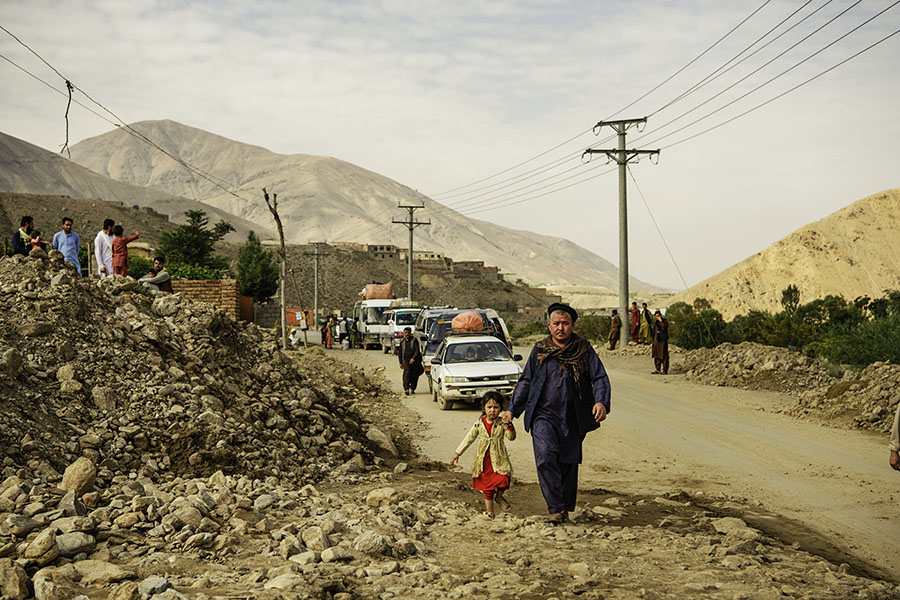 Travelers stranded by road closures caused by the floods wait for the authorities to clear the roads, in Shinwari, eastern Afghanistan, on Aug. 17, 2022. Widespread flash floods have left more than 40 dead and 100 others injured in recent days in Afghanistan, battering a country already reeling from an economic crisis, terrorist attacks and other natural disasters. (Kiana Hayeri/The New York Times)

Ahmad Gul, 50, made a living by harvesting almonds from the 120 trees he kept on his 6 acres of land near the village — nearly all of which were destroyed in the flood. Bending over to dig one of the trees out of a pit of mud, a last-ditch attempt to salvage what he could, he was unsure how he would ever rebuild his meager livelihood.

“I have nothing left — no bread to eat, no clothes to wear and no place to stay,” he said.

The Taliban carried out a search and rescue operation Tuesday, and aid organizations had begun to deliver food aid and makeshift shelters to the affected areas. But many of those affected said the assistance was not enough and called on the Taliban government to do more to help them rebuild their livelihoods.

“Our problems cannot be solved with a blanket and a tent,” said Hajji Hayatulllah, 66.

Tweets by @forbesindia
Startup Fridays S3 Ep3: 'If your conviction is strong, follow through, as there's rarely a right time' — Bobby Balachandran
When the pursuit of fame runs through a Miami jail