Far from Kabul, building a new life, with music and hope

Under the U.S.-backed government in Kabul, the Afghanistan National Institute of Music had flourished, becoming a symbol of Afghanistan's changing identity. The Taliban had long treated it as a threat. More than 250 students fled and found asylum in Portugal and are now reviving their passion for music 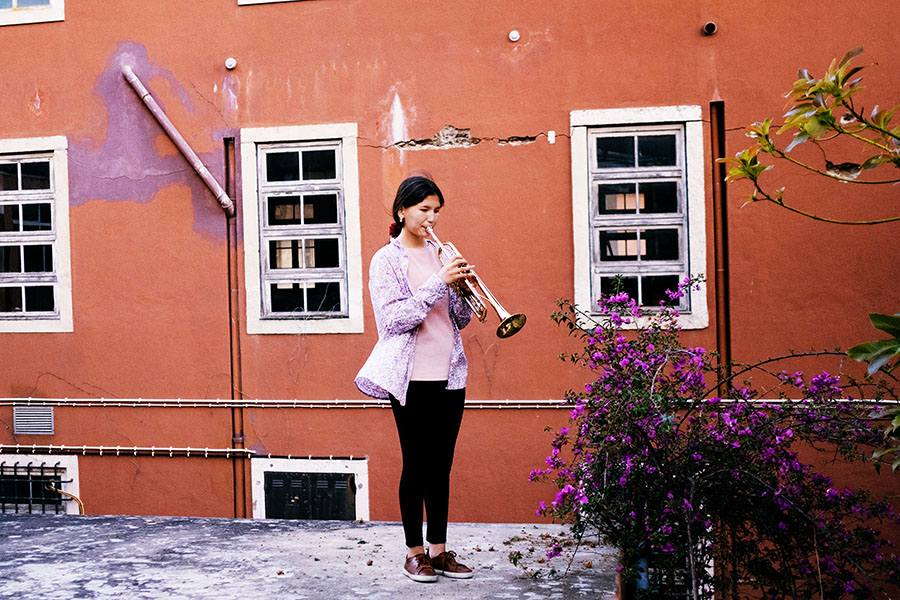 Zohra Ahmadi plays trumpet at the Afghanistan National Institute of Music compound, in Lisbon, Portugal, on May 8, 2022. Ahmadi was convinced from a young age that she wanted to be a professional musician. (Isabella Lanave/The New York Times)

LISBON, Portugal — On some nights, when her dorm room in Lisbon turns dark and the church bells stop ringing, the young trumpet player thinks about the distant afternoon when her uncle took her to the graveyard to gather stones.

That was in Afghanistan, in the chaotic days after the United States withdrew last year and the Taliban reasserted control. Her uncle had insisted that they pay respects at the family cemetery before they packed their bags with walnuts and spices and books of poems by Rumi, before they began their lives as refugees.

Standing by the graves, she watched as her uncle closed his eyes and listened to the wind. The ancestors, he said, were displeased with their decision to leave Afghanistan. Even the stones, he said, seemed to speak, urging them to stay.

Zohra Ahmadi, 13, could not hear the voices her uncle described. But as she scooped rocks and soil from the cemetery into a plastic container, following her uncle’s instructions, she said she heeded his words and vowed one day to return.

On a sweltering May morning, when the sun had already melted buckets of ice at the seafood market and the priests at Nossa Senhora da Ajuda church were just beginning their morning verses, a series of unfamiliar sounds emanated from the top of a former military hospital in western Lisbon.

The strumming of a sitar, the pounding of tablas, the plucking of a violin — these were coming from the hospital, now the makeshift home of the Afghanistan National Institute of Music. More than two dozen of its young musicians had gathered for one of their first rehearsals since arriving as refugees in December.

Under the U.S.-backed government in Kabul, the institute, which opened in 2010, had flourished, becoming a symbol of Afghanistan’s changing identity. It was a rare coeducational establishment in a country where boys and girls were often kept separate. While many programs focused exclusively on Afghan culture or Western music, it embraced both, preparing hundreds of young artists, many of them orphans and street hawkers, for careers in the performing arts.

The Taliban had long treated it as a threat. Fearing for their safety, more than 250 students and teachers as well as their relatives fled Afghanistan and sought shelter abroad in the months after the U.S.’s withdrawal, eventually arriving in Portugal, where they were all granted asylum. In their absence, the Taliban commandeered the institute, damaging instruments and turning classrooms into offices and dorms.

As students prepared to make music that morning, Ahmad Naser Sarmast, the school’s leader, spoke about the role they could play in countering the Taliban, a presence even in the rehearsal room, with news of starvation, violence and persecution back home lighting up the students’ phones.

“We can show the world a different Afghanistan,” said Sarmast, who was wounded by a Taliban suicide bomber who infiltrated a school play in 2014. “We will show how we can raise the voices of our people. We will show where we stand.”

The students readied their instruments. First, they played a popular Afghan song, “Sarzamin-e Man,” or “My Homeland.” Then they turned to a new work, “A Land Out of Earth?” written by a conductor of the orchestra, Mohammad Qambar Nawshad. He explained the inspiration for his piece: Aug. 15, 2021, the day the Taliban seized Kabul. He had stayed home, scared and shaking.

“That was the day everyone left us alone, and we were in the hands of evil,” he said. “There was no longer any guarantee that a team of Taliban would not come search for each of us and kill us.”

He lifted his arms, locked eyes with the students, and the room filled with the sounds of violin and sitar.

First, it was the music of Tchaikovsky that captured Zohra’s imagination: the Neapolitan Dance from “Swan Lake,” which she liked to play on repeat as she danced around her room. Then she fell for more popular fare: big-band hits and standards by singer Ahmad Zahir, the “Afghan Elvis.”

By 9, Zohra was convinced: She wanted to be a professional musician — and a ballerina, a mathematician and a physicist. She decided to start with the trumpet. Her parents enrolled her at the Afghanistan National Institute of Music, sending her from her native Ghazni province, in southeastern Afghanistan, to Kabul to live with her uncle.

She excelled at her music studies, mastering Afghan folk songs as well as classical works. But when the Taliban took power last year, her trumpet became a liability.

The Taliban had banned nonreligious music when it last held power, from 1996 to 2001. In the weeks after the U.S.’s withdrawal, Taliban fighters harassed and intimidated musicians and pressured radio stations, wedding halls and karaoke parlors to stop playing nonreligious songs.

Zohra’s relatives worried she would be punished if she were caught playing her trumpet. In August, her uncle sent the instrument back to Zohra’s mother in Ghazni, along with a violin, a flute and a harmonium.

“We didn’t want to keep anything in Kabul that showed we were playing music,” Zohra said. “I didn’t know what could happen to me if I were caught.”

The books and paintings inside their home were also a risk, her uncle had determined. One night, in the wood stove they used to keep warm in the winter, he burned the family’s most prized possessions: works by Sigmund Freud, novels by Salman Rushdie and portraits that his brother had painted.

Zohra tried not to watch, running from the fire. But from a distance, she caught glimpses of her favorite books being destroyed. “My heart,” she said, “was burning.”

In Portugal, the Afghans enjoy newfound freedoms. The boys and girls can go swimming together. They can date. The girls can wear shorts and skirts without fear of judgment. The older students can drink alcohol.

But life in Lisbon has also been a challenge. The students spend their days largely inside the military hospital, where they eat, sleep, rehearse, wash clothes and play table tennis, nervous about venturing too far or making new friends. Unaccustomed to Portuguese food, they keep bottles of curry, cardamom and peppercorn in their rooms to add familiar flavors to traditional dishes, like grilled sardines and scrambled eggs with smoked sausage.

On weekdays, they go to a local school for special classes in Portuguese and history, practicing phrases like “Bom dia” and “Obrigado” and learning about the country’s Roman Catholic heritage.

Some students, including Mohammad Sorosh Reka, 16, a sitar player, made the 5,000-mile journey to Portugal alone. He has watched from a distance as friends and family share news of bomb attacks, mass unemployment and corruption scandals.

In phone calls and WhatsApp messages, Reka tells his family to stay strong and to imagine a day when the Taliban loses power. Not wanting to add to his family’s troubles, he avoids speaking about the challenges he faces adapting to life in Portugal. He wears a golden ring that his mother gave him two days before he left Afghanistan, to remember his family.

“Sometimes they’re giving me hope,” he said, “and sometimes I’m giving them hope.”

He blames the United States and its allies, at least in part, for the turmoil in his home country.

“They were our friends and helping us, telling us they were here to help us at any time,” Reka said. “When the Taliban took Afghanistan, they just left and disappeared. That’s why we are very hopeless and sad.”

At night, the students often dream about Afghanistan. Amanullah Noori, 17, the concertmaster of the school orchestra, has recurring nightmares about Taliban attackers, armed with guns, descending on his parents’ home in Kabul. Sometimes he dreams about trying to return to Afghanistan, only to be blocked by the Taliban.

He receives messages from friends back in Afghanistan, fellow musicians who have given up their careers because of Taliban restrictions on playing music. They tell him they have hidden their instruments inside closets and cellars, fearing they might be attacked for being artists.

“The Taliban doesn’t want to hear music anymore,” Noori said. “They want a world that is silent.”

For months on end last fall, Zohra was trapped in Kabul, unable to get a passport to leave Afghanistan.

She watched with envy as her classmates fled for Doha on special flights arranged by the government of Qatar. (A global network of philanthropists, artists, educators and officials helped the school get its students and staff and their relatives to safety.)

As the weeks stretched on, Zohra began to doubt whether she would ever be able to join her friends and teachers. She remembered the days in Kabul when she and her classmates played music late into the night and sang together in the school choir.

Then, in mid-November, nearly three months after the Taliban seized power, Zohra; her uncle, Juma Ahmadi; and her cousin, Farida, 13, who also studied at the institute, got their passports. They boarded a flight for Doha, where they were quarantined and awaited visas to enter Portugal.

When they landed, Sarmast, the school’s leader, hugged them and cried as they rushed off the plane. They were the last three in the group to make it out of Afghanistan.