With candy pink and dainty styles, the "Barbiecore" aesthetic could be the most coveted look of the summer 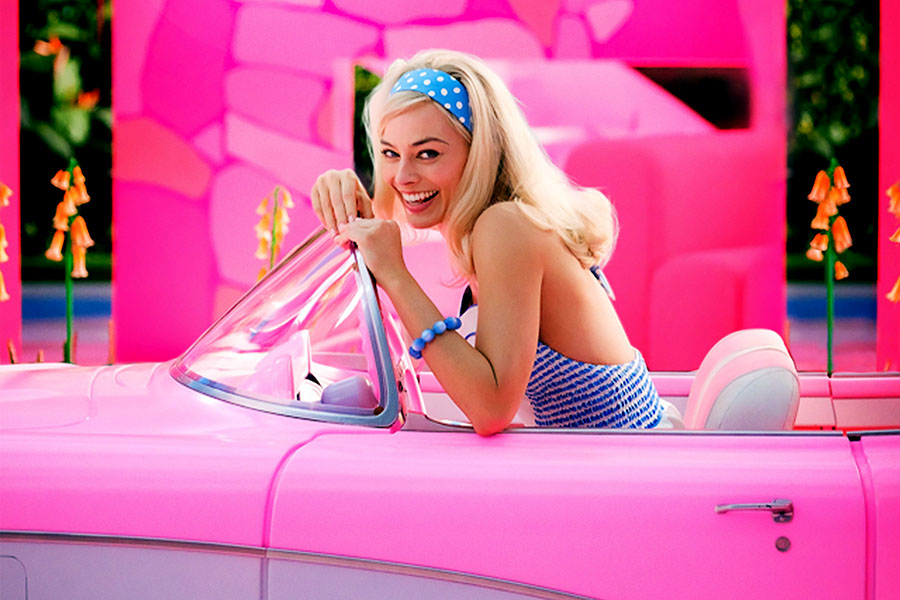 All things pink, ultra-short, ultra-tight and ultra-kitsch appear to be on a mission to conquer our wardrobes this summer, as part of a trend called "Barbiecore Image: Courtesy Warner Bros

Make like Barbie! While you might have thought that gendered fashion was a thing of the past, that wasn't counting on the power of influence of this pop culture icon. With the "Barbie" movie currently filming in California, the world's most famous doll is imposing her signature style on the catwalks, red carpets, and even our wardrobes, re-establishing certain stereotypes thought dead and buried.

Women have decided to move on from the comfort of sweatpants to embrace more extravagant clothing styles, bright colors and mismatched patterns. And there's nothing wrong with that. But from there, to choosing to dress like Barbie... It's actually quite unsettling, especially at a time when designers and brands—driven by a young generation determined to shatter all kinds of norms and conventions— seemed to be moving towards less gendered fashion. Nevertheless, the fact remains that all things pink, ultra-short, ultra-tight and ultra-kitsch appear to be on a mission to conquer our wardrobes this summer, as part of a trend called "Barbiecore."

"Life in plastic, it's fantastic"

Trends come thick and fast in fashion, and social networks have even introduced a whole bunch of micro-trends for everyone to take or leave. That at least means that there's something for everyone, but it also means that fashion feels a little bit all over the place. The goth look, hiker style, the 'weird girl' aesthetic, the minimalism of the 'coastal grandmother' and sporty fashion were among the main trends of the season. Everything and anything goes, in other words. But "Barbiecore" seems to be the absolute antithesis of all these trends, focusing on a stereotypical wardrobe in the extreme, channeling fun, glamour and ramped up femininity.

Mention of the "Barbiecore" aesthetic inevitably stirs up memories of the Danish band Aqua's late-'90s song that was an ode—albeit an ironic one—to the dream life of the popular children's doll. In the video, we see the singer dressed in skirts and crop-tops, tight dresses, and other relics of the nineties, sporting perfectly styled hair, and engaging in activities loaded with all manner of stereotypes. And that's basically "Barbiecore," but even more pink (if that's even possible).

Pink is the new Black

This aesthetic, inspired by Barbie's world, above all translates into an explosion of pink, a color already adopted by a host of stars across the Atlantic. Megan Fox didn't miss the opportunity to step out in the shade when attending the premiere of the documentary about her dear and beloved Machine Gun Kelly, aptly titled  "Life in Pink." She took to the red carpet in a Barbie-esque outfit. An experience that she repeated the following days on the streets of New York.

But the American actress is far from the only one taking style cues from Barbie. Hailey Bieber posted a picture on Instagram showing her wearing an outfit directly inspired by the world of the famous doll—a pink skin-tight mini-dress and XXL platform boots.

Similarly, the now blonde Kim Kardashian went as far as accessorizing her metallic pink outfit with a matching handbag adorned with multiple glittering embellishments. It's hard to get more kitsch, and that's probably—precisely—the appeal here! Meanwhile her sister Khloe posted pictures of herself looking like Barbie in a pink latex minidress with pink shoes and blonde locks. After two particularly gloomy years, the idea is to show off and have fun, summer being the ideal season to do both.

Even if this Barbie fad doesn't last, the fall season could still be tinged with her favorite shade—pink. The fall-winter 2022 shows proved a real ode to the vibrant color, starting with Valentino, which splashed the shade on dozens of looks, both in women's and men's styles. But the fashion house isn't alone in bringing pink to its collections. Michael Kors, Versace, Act No. 1 and Dolce & Gabbana are among the brands that hope to keep rose-tinted fashion on the agenda for a few more months.