Whether James Cameron can still strike the balance between art and box office, will be tested as the world finally gets to see 'Avatar: The Way of Water' next week—a sequel to his groundbreaking extraterrestrial epic that has been 13 years in the making 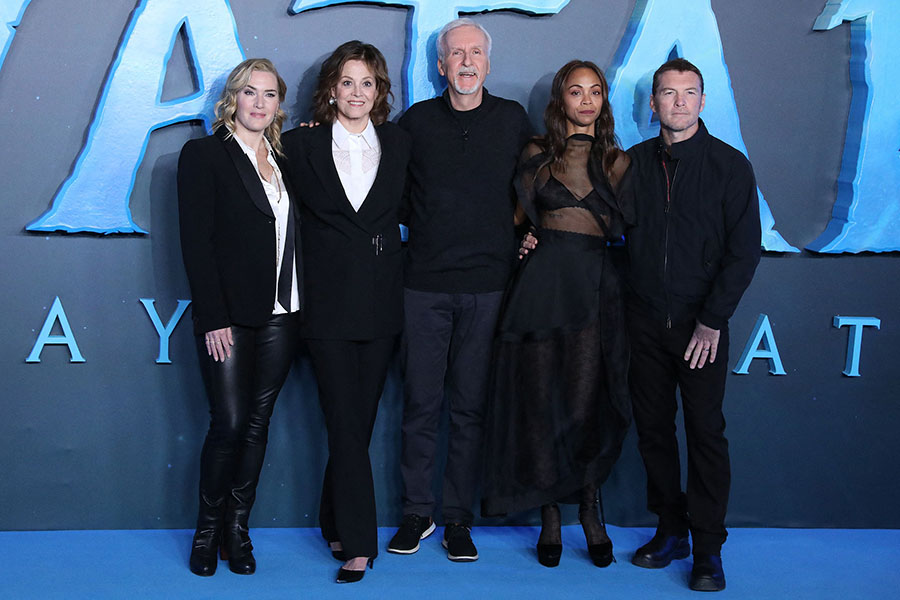 The cast of "Avatar: The Way of Water" with James Cameron Image: Isabel Infants / AFP

In an era when special effects are much more accessible to filmmakers, and studios are willing to regularly spend hundreds of millions of dollars on blockbusters, it is the artistic talent that makes the difference, Cameron said during a visit to Paris.

Whether he can still strike the balance will be tested as the world finally gets to see "Avatar: The Way of Water" next week—a sequel to his groundbreaking extraterrestrial epic that has been 13 years in the making.

"Anybody could buy a paintbrush. Not everybody can paint a picture," the Canadian director said. "The technology doesn't create art. Artists create art—that's important."

It was originally hoped that a first sequel would be out in 2014, but Cameron's gargantuan ambitions led to repeated delays.

He does not come across like the sort of megalomaniac director of Hollywood lore -- describing his sets as "a big hippie commune with a bunch of really great artists."

But these hippies are armed with some powerful computers.

"We had over 3,200 shots, which is a lot to maintain high quality, high quality control," Cameron said.

"We brought in machine deep learning and plugged AI into various stages of the process to assist us... not to take the place of the actors at all but actually to be more truthful to what they had done," he said.

The challenge was managing to draw emotion out of performances that were largely shot in front of green screens, and where most of the scenery and props would only appear later in the effects booths.

"The heart, the soul, the emotion, the conflict, creativity... all that happens first, and then all the technical work begins," he said.

Cameron has always justified the vast sums he has asked of studios—"Titanic" was both the most expensive and most profitable film of all time following its release in 1997, only to be topped by "Avatar" in 2009—and he feels that responsibility "every day".

"I can't be whimsical or impulsive, I have to be very focused and dedicated to creating something that's both pleasing to me artistically, and that I think will be pleasing to the public and commercial enough to make some money," he said.

"It can't be too intellectual, but I can make it satisfying to me by putting in secondary and tertiary levels of meaning that I know are there."

Clearly, much of the impulse of the Avatar series is drawing attention to humanity's impact on nature, but the sequel also focuses on Cameron's aquatic interests.

Long fascinated by the sea, from 1989's "The Abyss" to "Titanic", Cameron became a deep ocean explorer for National Geographic in the 2000s and was the first solo human to visit the deepest underwater trench, the Mariana Trough, in a purpose-built submarine.

He sees "Avatar" as "awakening that thing in all of us, that connection to nature.

"The movie asks you to feel something for nature... It's about maybe feeling a sense of outrage," Cameron said.

"These Navi characters... they don't look like us, they're blue, they've got the ears and tails. But they represent the better angels of our nature.

"Maybe for 10 minutes after the movie's over, you see the world a little differently," he added.

Tweets by @forbesindia
From Kim Kardashian to Barbiecore and Coperni: 2022's wildest fashion inspirations
Governance conflicts in companies: How structural overhaul can help