Cheap mealboxes give a taste of Hong Kong's economic woes

Small shops selling inexpensive two-dish mealboxes have mushroomed across one of the world's least affordable cities, cropping up in working-class and white-collar areas alike as people tighten their belts amid fears of a recession after pro-democracy protests followed by strict Covid protocol for over two years 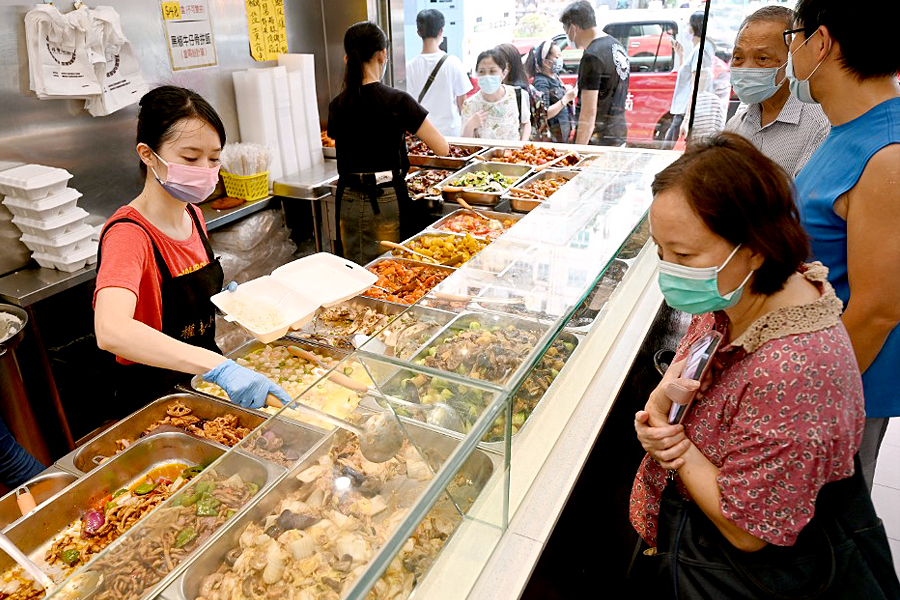 Hong Kong, China: Hong Konger Kitty Chan pivoted to takeout to help her restaurant survive the pandemic, but she has since opened a second shop as demand for cheap mealboxes surges in a city enduring economic woes.
Small shops selling inexpensive two-dish mealboxes have mushroomed across one of the world's least affordable cities, cropping up in working-class and white-collar areas alike as people tighten their belts.

"The Covid restrictions were a catalyst," she told AFP at her restaurant in Kowloon, one of the world's most densely populated city districts, as a queue of hungry patrons snaked down the street. "There are multiple factors in this city that make us many people's kitchen."
Hong Kong took an economic hit in 2019 when months of democracy protests kept visitors away and helped tip the city into a prolonged recession.
More than 2.5 years of strict Covid controls have again pushed the Asian finance hub into negative growth.
Hong Kong finance chief Paul Chan warned Thursday there is a "very high chance" the city will end the year in a full-blown recession while the fiscal deficit is expected to balloon to HK$100 billion ($12.7 billion), twice initial estimates.
The mealbox boom "is similar to the emergence of dollar shops during the (2008) financial crisis," said Andy Kwan, director of the ACE Centre for Business and Economic Research think tank. "People tend to spend less when the economy is not well and confidence is low," he told AFP.
Chan's restaurants are selling 2,000 to 3,000 mealboxes per day at around HK$48 ($6).
Mealboxes go for anything from HK$25 to HK$80 depending on ingredients and shop locations, and many include a drink or soup.

Buffet in a box

To compete in what is now a crowded market, Chan tries to supply the kind of food you can get in a sit-down restaurant — mostly wok-fried Cantonese dishes such as black-pepper beef short ribs, steamed fish and razor clams.
Her strategy has attracted a mostly white-collar clientele.
"The two-dish mealbox is a very interesting entry point to observe our economy," said Fred Ku, an economist at the Chinese University of Hong Kong.
Ku said that while the two-dish restaurant had long been a feature of the city, "the consumers' perception has changed and these mealboxes are no longer a symbol of relatively low income".
Also read: 'Submit or quit': Teacher, student brain drain hits Hong Kong schools
China and Hong Kong have largely escaped the runaway inflation seen across the globe.
But food in particular has become more expensive — Chan estimates her grocery purchases have risen about 20 percent this year.
Mealbox restaurants are also popular with Hong Kongers who have refused to vaccinate themselves against Covid.
The city uses a QR code system that denies unvaccinated people access to most public premises.
Retiree Grace, who gave only her first name, described herself as "a denied person" because she had only gotten one vaccination shot.
"At first I thought why not give (mealboxes) a try since I had to have takeaway," the 68-year-old told AFP. "But now I find it pretty attractive... it feels like having a buffet."

A Facebook group for sharing tips on mealbox restaurants, started by social worker Andrew Wong, has grown to 87,000 members.
"When I opened the group at the end of 2021, we found 110 to 120 such restaurants, and so far in 2022, we have found 150 brand new spots," he told AFP.
Another crowd-sourced map lists more than 440 two-dish restaurants across Hong Kong, up from around 330 in May.
Wong said the boom was fuelled by Covid restrictions and the drop in tourist numbers over the last three years.
Before the protests and pandemic, Hong Kong would see around 65 million tourists a year, with 78 percent coming from the Chinese mainland.
That has slowed to a trickle, with the Chinese border effectively closed and international arrivals still facing mandatory hotel quarantine on arrival.
City leader John Lee has vowed to reopen the city and hinted at further Covid relaxations in the coming weeks.
But Hong Kong's international access remains far behind rivals such as Singapore, London and Tokyo.
"People are wondering if there is any policy to stabilise the economy and whether the government is enterprising enough to bring changes," think-tank director Kwan said. "Meanwhile, people are cutting daily expenses so they can have more to spend if the worst happens".