As an enticement, Beijing is offering millions of dollars in financial assistance, the prospect of a China-Pacific Islands free trade agreement and access to China's vast market of 1.4 billion people 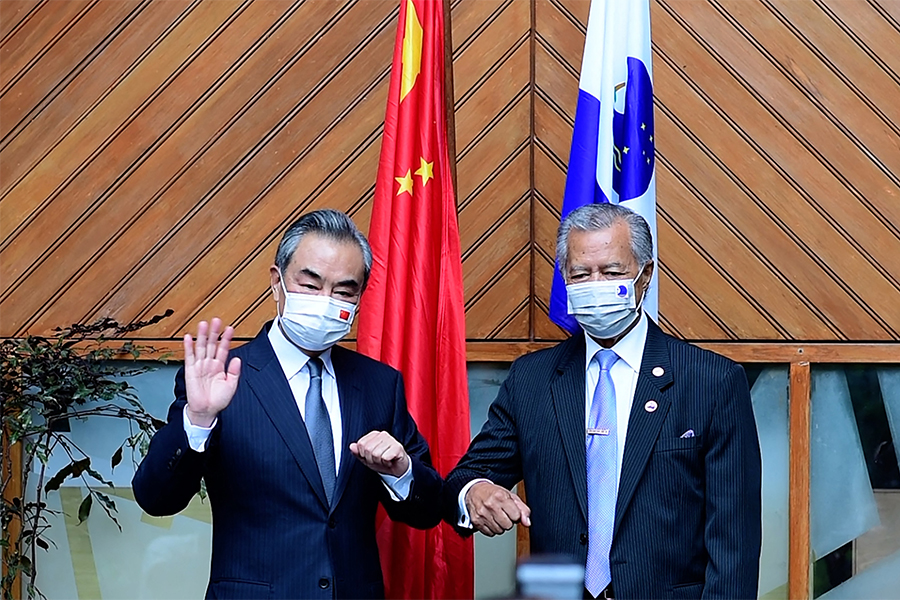 Chinese Foreign Minister Wang Yi holds talks with leaders and top officials from ten Pacific Island nations Monday, part of a regional diplomatic blitz that has stirred deep Western concern.
The virtual summit is expected to discuss leaked proposals for China to radically increase its involvement in the security, economy and politics of the South Pacific.
Wang is in the Fijian capital Suva, where he will co-host a virtual meeting with regional foreign ministers—many of whom are also leaders of the small island states.
On the table is a secret deal—obtained by AFP—that would see China train local police, become involved in cybersecurity, expand political ties, conduct sensitive marine mapping and gain greater access to natural resources on land and in the water.

As an enticement, Beijing is offering millions of dollars in financial assistance, the prospect of a China-Pacific Islands free trade agreement and access to China's vast market of 1.4 billion people.
Ahead of the meeting, President Xi Jinping sent a message that China would be "a good brother" to the region and that they shared a "common destiny", according to state broadcaster CCTV.
Only Pacific nations that recognise China over Taiwan will attend today's summit, including those Wang has already visited on his regional whistle-stop—Solomon Islands, Kiribati, Samoa and Fiji.
The proposal comes as Beijing jostles with Washington and its allies over influence in the strategically vital Pacific.

Analysts say the deal is unlikely to be unanimously approved by Pacific Island leaders today.
A recent security deal between the Solomon Islands and China caused deep unease in a region that is usually more concerned by climate change than superpower politics.
"The Solomons came off as an outlier, there wasn't a rush of interest," said Richard Herr, an academic at the University of Tasmania who has decades of experience working in the Pacific Islands.
The region will be hesitant about "being dragged into geostrategic competition," he said.
There has already been some pushback to Beijing's latest proposal, including from President of the Federated States of Micronesia David Panuelo, who warned other Pacific leaders it could cause "the fracturing of regional peace, security, and stability".
The president of Palau, a Pacific nation that maintains diplomatic ties with Taiwan, told the ABC Monday that the region "should be concerned" about the proposed deals.
Western powers have bristled against the deals, with the US State Department warning the Pacific to be wary of "shadowy, vague deals with little transparency" with China.
Australia joined the United States in urging South Pacific nations to spurn China's attempts to expand its security reach deep into the region, with the country's new foreign minister warning of the "consequences" of such deals.
But many Pacific nations are also keen to maintain amicable ties with China, balancing relations between Beijing and Washington or playing each off against the other.
So it is far from clear what Pacific Island leaders will tell Wang Monday or in a series of closed-door meetings around the South Pacific.
"It's hard to believe that the Chinese foreign minister will come to the region and be told to go home," said Herr.
"It could be an embarrassment. Every Chinese diplomat in the region will be working on that."

Wang said Sunday that Beijing was willing to work with other major powers in the Pacific region to help island nations develop.
"China is willing to carry out more tripartite cooperation with other countries, especially countries with traditional influence in the region," he said when he met with Pacific Islands Forum Secretary General Henry Puna.
He described his Pacific tour as "a trip of peace, friendship and cooperation," according to a statement by the Chinese foreign ministry.
Wang is expected to remain in Fiji's capital until at least Tuesday, meeting with the country's leaders and hosting the second China-Pacific Island Countries Foreign Ministers' meeting.
The Chinese foreign minister will visit Vanuatu, Papua New Guinea and Tonga—just months after the island nation was devastated by a deadly earthquake and tsunami—to round out his tour.
© Agence France-Presse

Tweets by @forbesindia
Why South America's breadbasket isn't the answer to global wheat crisis
Climate finance is the biggest opportunity of our times: Climake's Simmi Sareen