China is pursuing a regional agreement with Pacific island nations that would expand Beijing's role in policing, maritime cooperation and cybersecurity while offering scholarships for more than 2,000 workers and young diplomats 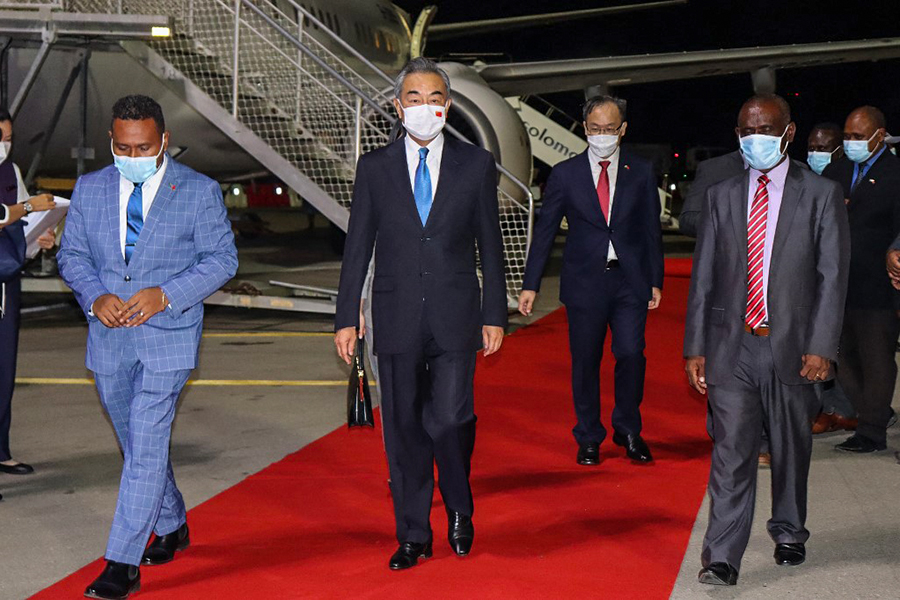 SYDNEY, Australia — China is pursuing a regional agreement with Pacific island nations that would expand Beijing’s role in policing, maritime cooperation and cybersecurity while offering scholarships for more than 2,000 workers and young diplomats, according to documents obtained by The New York Times.

Drafts of the deal were sent to 10 Pacific countries in advance of a Pacific tour by China’s foreign minister, Wang Yi, who is scheduled to meet with regional leaders next week in Fiji.

Covering a range of issues, the documents appear to be a joint communiqué that Beijing wants the countries to adopt. They offer a detailed outline of how Beijing seeks to win friends and gain greater access to the island chains that have long played a strategic role in Asia’s geopolitical contests.

The visit and the agreement both seem aimed to counter U.S. efforts to strengthen alliances in Asia.

Wang’s first stop is the Solomon Islands, where he is scheduled to appear Thursday to sign a security pact that has already put the Americans and the region on edge. And he is visiting within days of President Joe Biden’s Quad meeting in Tokyo with leaders of Australia, Japan and India, where the focus was on containing China’s regional influence.

“Wang Yi’s visit, in my view, is a direct challenge to the open and free Indo-Pacific,” said Peter Kenilorea Jr., the Solomon Islands deputy opposition leader.

China is trying to show the Pacific that while the U.S. and its allies are “talking about you” in their Quad meeting, he said, Chinese officials are “here to talk directly to you.”

But, he added, China was also making demands.

“A regional approach is a clear escalation of CCP’s ambition in the Pacific,” Kenilorea said, referring to China’s ruling Communist Party.

It amounts to a rapid acceleration of a diplomatic push that has, until now, largely focused on one country at a time. The leaked agreement has the potential to pull several nations into Beijing’s orbit at once — if widely approved.

And there are signs that the bold approach could backfire. The Pacific islands span thousands of miles, with sparsely populated countries that have unique histories and rivalries. Regional agreements typically take years to hammer out; springing a complex proposal onto the Pacific a week before Wang’s visit will be viewed by many leaders with suspicion.

President David Panuelo of the Federated States of Micronesia has already warned that the documents reflected nothing short of an effort by China “to acquire access and control of our region.”

In a letter sent last week to 21 countries in the region, he wrote that the proposed language in the agreement “opens our countries to having our phone calls and emails intercepted and overheard.”

He also noted that the regional agreement included language requiring that Pacific island countries abide by the “one China” principle. The Federated States of Micronesia have a defense agreement with the U.S. and an economic cooperation agreement with China. Granting China greater access to the seas, lands, customs systems and digital networks of their countries, Panuelo argued, increased the chances of China invading Taiwan and going to war with the U.S., Japan, Australia and New Zealand.

“Whoever wins in such a conflict, we will once again be the collateral damage as we become stuck in the crossfire of the bigger countries,” he wrote.

And yet, his warning may not be heeded — in part because of what else the agreement includes. There are offers of assistance for dealing with climate change, for development and for sophisticated police laboratories, and promises of at least 2,500 government scholarships over the next five years.

The educational giveaways reflect how Chinese diplomacy has evolved to become more sophisticated throughout the Pacific in recent years. Instead of just offering loans for infrastructure, roads and bridges, China now emphasizes its ability to provide vocational and other kinds of training — something that the U.S. and its main allies, New Zealand and Australia, do not offer at the same scale, if at all.

Related to that, the proposed Pacific agreement also includes the promise of an even more direct link to Beijing: This year, if COVID-19 allows, the documents state, China promises to start a new training program for young diplomats from Pacific Island countries. It is part of a capacity-building plan that also includes seminars on Chinese governance.

Some of the language in the documents is vague enough to allow countries to sign on and pick and choose how they participate. A section on “network governance and cybersecurity,” for example, calls for the parties to “take a balanced approach to technological progress, economic development and protection of national security and public interests.”

Some analysts said that the proposal feels rushed and ad hoc, along with Wang’s visit, which appears to have been hastily pulled together, with COVID-19 keeping travel limited and some stops still not confirmed.

The Solomons deal, which could allow for Beijing to deploy forces to the country to maintain stability or refuel naval ships, gave China an opening, critics argue. Now, they said, Beijing’s top diplomat is trying to leverage that across the region.

But in a region where unexploded bombs from World War II are still killing innocent people as recently as last year, anything that undermines stability intensifies anxiety and stirs opposition.

On the Solomon Islands, the country’s media association has vowed to boycott Wang’s visit to Honiara, the capital, because the published schedule included a news conference Thursday specifying that only one local journalist would be allowed to ask just a single question.

“It’s so unfortunate that Solomons is being used by Beijing now to push their own regional ambitions and destabilize order,” Kenilorea said.

Tweets by @forbesindia
CoinDCX offers an opportunity to its users to generate crypto yield on crypto assets through it's 'Earn feature'
Stellantis has some stellar ambitions for India. Can it make them work?