Nicaragua's secretive ruling family reaches out to the US quietly

Shortly after Russia's invasion of Ukraine, the most prominent son of Nicaragua's autocratic president, Daniel Ortega, quietly approached Washington to restart dialogue. The key topic on his mind: sanctions relief for the family 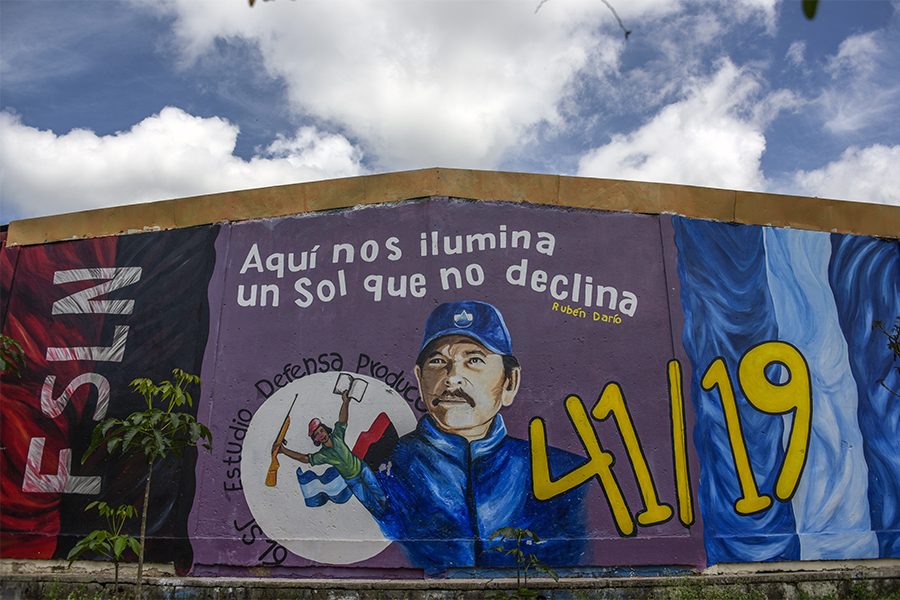 A mural depicting president Daniel Ortega in Estelí, Nicaragua, on July 2, 2021. The slogan at top is a quotation from the 19th century Nicaraguan poet Rubén Dario and reads “Here we are illuminated by a sun that does not decline.” (Inti Ocon/The New York Times)

Nicaragua’s ruling family has largely weathered sanctions imposed by the United States in recent years as U.S. officials accused the country’s government of sliding toward autocracy.

Now, it seems, the family’s resolve may be breaking.

Shortly after Russia’s invasion of Ukraine, the most prominent son of Nicaragua’s autocratic president, Daniel Ortega, quietly approached Washington to restart dialogue, according to officials and diplomats familiar with the outreach, as the Biden administration levied sanctions against Moscow, one of the Central American nation’s few remaining allies.

The key topic on his mind: sanctions relief for the family.

The meteoric rise of the son, Laureano Ortega, has helped the family consolidate power; he now manages Nicaragua’s most important relationships, forging landmark diplomatic and energy agreements with high-level Chinese and Russian diplomats.

A senior State Department official was dispatched to Nicaragua’s capital, Managua, to meet with Laureano Ortega in March, but the meeting never took place after the Ortegas seemingly got cold feet. Laureano Ortega, 40, is seen by some analysts as a favorite to succeed his father, 76, a former revolutionary leader who is said to be in poor health.

But sanctions intended to thwart Ortega’s dictatorial tendencies have hit the family and its inner circle hard; top generals and several of the president’s children, including Laureano Ortega, have been sanctioned by Washington, their businesses blacklisted and accused of laundering money for the regime.

The high-level nature of the overture was taken as a signal by Washington that Latin America’s autocracies may be rethinking their alliance to Russian President Vladimir Putin as his country’s military is bogged down in Ukraine and its economy ravaged by sanctions.

The Biden administration hopes to make inroads with Putin’s Latin American partners by portraying Russia as a declining power with little to offer.

On March 5, shortly after Russia’s invasion, senior U.S. officials flew to Venezuela for talks, the highest-level negotiations between the countries in years. Those talks secured the release of two imprisoned Americans, while President Nicolás Maduro of Venezuela signaled a willingness to increase his country’s oil production if Russian oil exports were banned.

The United States was quick to ban Russian oil, and the European Union is on the verge of imposing its own embargo.

The ruling Nicaraguan regime finds itself in a precarious financial state.

“Russia cannot give them money now, and the Venezuelan wallet is closed,” said Arturo McFields, Nicaragua’s former ambassador to the Organization of American States, who resigned in March to protest Daniel Ortega’s dictatorial rule.

McFields said that he was briefed on Nicaragua’s outreach to Washington before he resigned and added that the Ortega family and its inner circle were reeling under U.S. sanctions.

The president’s children are unable to live the comfortable lives to which they have grown accustomed, while the money needed to pay pro-government paramilitaries or expand the police force to manage growing dissent is dwindling every month, McFields and a former senior U.S. official said.

Daniel Ortega’s spokesperson and vice president, his wife, Rosario Murillo, did not respond to questions about the talks, instead emailing revolutionary slogans. In the past, she has denounced the sanctions as imperial aggressions.

A senior State Department official said it was unclear whether Laureano Ortega’s outreach was prompted by fears that Russia’s growing isolation would affect the Ortega regime, which is increasingly seen as a pariah state by much of Latin America, or whether it was the byproduct of internal dissent between the family and the “old guard” — the president’s allies from his Sandinista days who serve in his government.

As the family increases its grip over the state, members of the old guard are increasingly at odds with the Ortega family — uncomfortable with their growing dynastic ambitions — and are also affected by Washington’s sanctions, according to the U.S. official and McFields. The State Department official spoke on condition of anonymity to discuss a sensitive matter that has not been reported.

“A key takeaway from this outreach is that the U.S. sanctions on Nicaragua clearly have the family’s attention,’’ said Dan Restrepo, a former national security adviser for Latin America under President Barack Obama. “Probably even more so as the U.S. ramps up its sanctions regime against Russia. That combination is clearly hitting pretty hard when it comes to regime insiders.”

If the Ortega family is willing to discuss releasing political prisoners, Washington will engage, the State Department official added. If not, Washington is preparing to apply additional pressure on the regime with more sanctions.

When reached by telephone, Campbell denied that and said he had no knowledge of the matter.

Daniel Ortega often consults his wife, Murillo, before making major political decisions, McFields and a U.S. official said, a relationship so close, the couple is often referred to in Nicaragua as “OrMu,” a mashup of their names.

It is unclear whether Laureano Ortega or Murillo will eventually take over from Daniel Ortega, according to analysts and U.S. officials. Murillo is in her 70s and, if chosen, may hold the presidency for a period before handing the reins to her son.

“Laureano is not autonomous enough to move a finger without having the full agreement from both Ortega and Murillo,” said Carlos Fernando Chamorro Barrios, a Nicaraguan journalist who fled last year, just months before his sister, Cristiana Chamorro, a presidential candidate, was jailed.

“Laureano is used as the messenger for his mother and father. This is as high up as possible.”

Tweets by @forbesindia
Crypto donations to be accepted in the US Federal elections
South Korea to remove ban on ICO; new crypto regulations underway