InSight, a stationary robotic probe on Mars, has been steadily growing weaker as dust accumulates on its solar panels. Mission managers predict that by late summer it will not have enough energy to continue operating its instruments and that by the end of the year it will fall silent 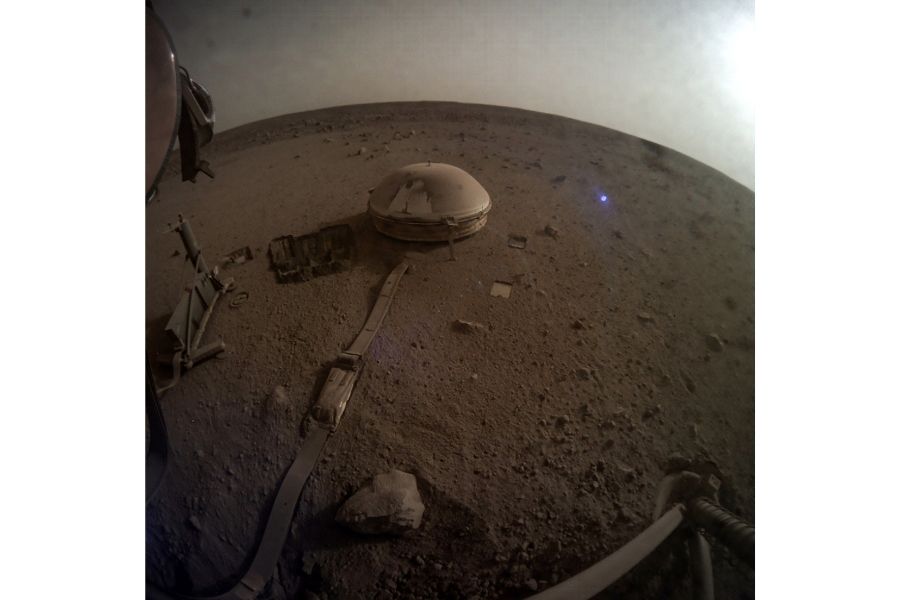 A photo provided by NASA and JPL-Caltech shows the area in front of the InSight Mars lander on Monday, May 16, 2022. The stationary robotic probe on Mars has been steadily growing weaker as dust accumulates on its solar panels. Image: NASA/JPL-Caltech via The New York Times

NASA’s InSight spacecraft is not quite dead yet.
But InSight, a stationary robotic probe on Mars, has been steadily growing weaker as dust accumulates on its solar panels. Mission managers predict that by late summer it will not have enough energy to continue operating its instruments and that by the end of the year it will fall silent.
“That’s just due to the lack of energy,” Kathya Zamora Garcia, the mission’s deputy project scientist, said during a news conference Tuesday.
The spacecraft could prove lucky if a dust devil — a miniature whirlwind swirling along the Martian landscape — passes over and blows the dust off the solar panels. Although several thousand dust devils have been detected in the area, none has helpfully cleaned InSight.
“We’re not too hopeful given that it’s been 3 1/2 years and we haven’t seen one yet,” said Bruce Banerdt, InSight’s principal investigator, “but it could still happen.”
When InSight landed in November 2018, its pristine solar panels generated 5,000 watt-hours of energy each Martian day. Now, enshrouded in dust, they are producing one-tenth as much.
The spacecraft fulfilled its main objectives during its two-year primary mission; NASA then approved a two-year extension through the end of 2022.
As the energy dwindles, the managers will begin to shut down the spacecraft’s instruments and stow its mechanical arm. They will try to keep the craft’s main scientific tool, a sensitive seismometer, running as long as possible, although in a couple of weeks they will start to run it for only part of the day, or maybe even every other day, instead of continuously.
Garcia said the seismometer would probably have to be shut off entirely in July. After that, there will be just enough energy to check in with radio communications and perhaps snap an occasional photograph.
Most of NASA’s missions to Mars over the past two decades have focused on the possibility that the sun’s fourth planet may have once been hospitable for life.
InSight — the name is a compression of the mission’s full name, Interior Exploration Using Seismic Investigations, Geodesy and Heat Transport — was a diversion, focusing instead on the mysteries of Mars’ deep interior. The $830 million mission aimed to answer questions about the planet’s structure, composition and geological history.
Mars lacks plate tectonics, the sliding of pieces of the crust that shapes the surface of our planet. But marsquakes occur nonetheless, driven by other tectonic stresses like the shrinking and cracking of the crust as it cools.
During its mission, InSight recorded more than 1,300 marsquakes. Just two weeks ago, it observed the largest marsquake so far: a magnitude of 5.0, modest by Earth standards but at the high end of what scientists expected for Mars.
The epicenter of the magnitude-5.0 quake was located near a series of fissures known as Cerberus Fossae, where many marsquakes detected earlier had occurred, Banerdt said. But, he added, “It’s not actually in Cerberus Fossae, which is interesting. And we don’t really understand that yet.”
He said the scientists have had only two weeks to analyze the data, but they could clearly see the seismic signals, and the quake might have been large enough that it could have made Mars start vibrating like a bell, although at frequencies too low to be heard.
“This quake is really going to be a treasure trove of scientific information when we get our teeth into it,” Banerdt said.
By listening to the echoes of the seismic waves bouncing around inside Mars, InSight produced data that could be turned into a 3D map of the planet.
The crust turned out to be thinner than expected and appears to consist of three sublayers. The seismic signals also measured the size of the core: about 2,300 miles in diameter.
The seismometer revealed not just what was below but also the dynamics in the air above. Winds blowing between 10 and 15 mph over InSight’s solar panels caused the spacecraft to vibrate, and spacecraft recorded the vibrations, which were transformed into sounds.
The other main instrument on InSight, a heat probe that was to hammer itself about 16 feet into the Martian soil, failed to fully deploy.
Despite two years of efforts, the instrument, nicknamed the “mole,” never got much more than an inch below the surface. The soil where it landed tended to clump, a property that was different from material encountered at other places on Mars. The clumping reduced the surface area of dirt pressed against the sides of the mole, and, with insufficient friction, it was unable to hammer itself downward.
“It turned out the particular soil that was underneath InSight, when we landed, had a consolidated layer of crusty soil at the very top,” Banerdt said. “And that crust, the soil sort of disintegrated as the mole tried to penetrate.”
Without the mole making it underground, the scientists did not obtain hoped-for measurements of heat flowing out of the planet, which would have revealed more precise data about the interior temperatures of Mars today and the energy driving geological processes.
“That’s what we lost,” Banerdt said.
Even after InSight falls silent, there will remain a possibility that a passing dust devil could sweep the solar panels and the spacecraft could revive.
“We’ll be listening,” Garcia said. “And once we get a few beeps, if that happens again, if there’s a natural cleaning, then we will evaluate whether there’s enough energy to have the lander operate again.”