"An Accord for a Healthier World" focuses on five areas: infectious diseases, cancer, inflammation, rare diseases and women's health—where Pfizer currently holds 23 patents, including the likes of Comirnaty and Paxlovid, its Covid vaccine and oral treatment 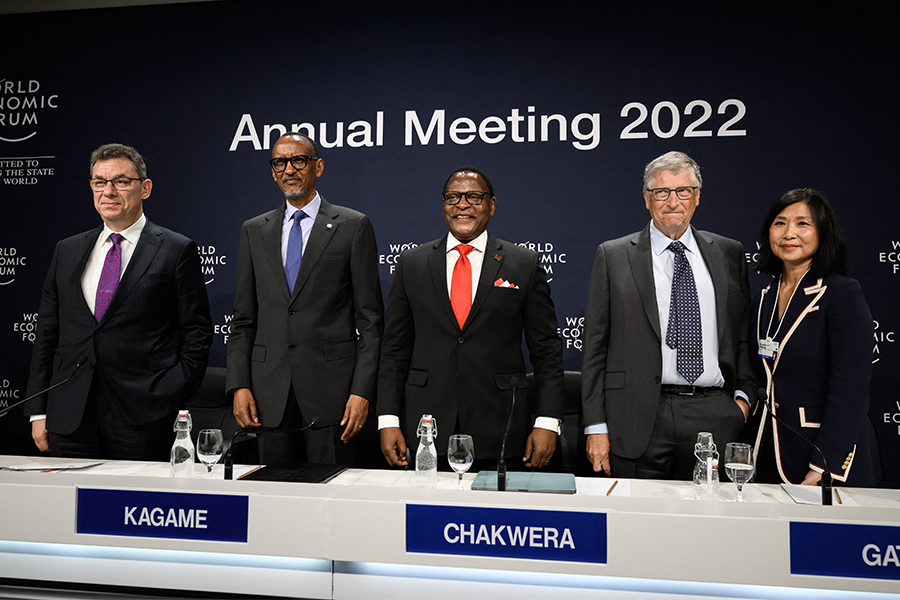 (From L) Pfizer CEO Albert Bourla, Rwanda President Paul Kagame, Malawi’s President Lazarus Chakwera, Philanthropist and co-founder of Microsoft Bill Gates and Pfizer group president Angela Hwang pose after a press conference on the sidelines of the World Economic Forum (WEF) annual meeting in Davos on May 25, 2022. US pharmaceutical giant Pfizer stated it would sell its patented drugs at a not-for-profit basis to the world's poorest countries, as part of a new initiative announced at the World Economic Forum in Davos.

US pharmaceutical giant Pfizer on Wednesday said it would sell its patented drugs on a not-for-profit basis to the world's poorest countries, as part of a new initiative announced at the World Economic Forum in Davos.
"The time is now to begin closing this gap" between people with access to the latest treatments and those going without, chief executive Albert Bourla told attendees at the exclusive Swiss mountain resort gathering.
"An Accord for a Healthier World" focuses on five areas: infectious diseases, cancer, inflammation, rare diseases and women's health—where Pfizer currently holds 23 patents, including the likes of Comirnaty and Paxlovid, its Covid vaccine and oral treatment.

"This transformational commitment will increase access to Pfizer-patented medicines and vaccines available in the United States and the European Union to nearly 1.2 billion people," Angela Hwang, group president of the Pfizer Biopharmaceuticals Group, told AFP.
Five countries: Rwanda, Ghana, Malawi, Senegal and Uganda have committed to joining, with a further 40 countries—27 low-income and 18 lower-middle-income—eligible to sign bilateral agreements to participate.
"Pfizer's commitment sets a new standard, which we hope to see emulated by others," Rwanda's President Paul Kagame said.
But he added that "additional investments and strengthening of Africa's health systems and pharmaceutical regulators" would also be needed.

Developing countries experience 70 percent of the world's disease burden but receive only 15 percent of global health spending, leading to devastating outcomes.
Across sub-Saharan Africa, one child in 13 dies before their fifth birthday, compared to one in 199 in high-income countries.
Cancer-related mortality rates are also far higher in low and middle-income countries—causing more fatalities in Africa every year than malaria.
All this is set to a backdrop of limited access to the latest drugs.
Essential medicines and vaccines typically take four to seven years longer to reach the poorest countries, and supply chain issues and poorly resourced health systems make it difficult for patients to receive them once approved.
"The Covid-19 pandemic further highlighted the complexities of access to quality healthcare and the resulting inequities," said Hwang.
"We know there are a number of hurdles that countries have to overcome to gain access to our medicines. That is why we have initially selected five pilot countries to identify and come up with operational solutions and then share those learnings with the remaining countries."

Specifically, the focus will be on overcoming regulatory and procurement challenges in the countries, while ensuring adequate levels of supply from Pfizer's side.
The "not-for-profit" price tag takes into account the cost to manufacture and transport of each product to an agreed upon port of entry, with Pfizer charging only manufacturing and minimum distribution costs.
If a country already has access to a product at a lower price tier, for example vaccines supplied by GAVI, a public-private global partnership, that lower price will be maintained.
Hwang acknowledged that even an at-cost approach could be challenging for the most cash-strapped countries, and "this is why we have reached out to financial institutions to brief them on the Accord and ask them to help support country level financing."
Pfizer will also reach out to other stakeholders—including governments, multilateral organizations, NGOs and even other pharmaceuticals—to ask them to join the Accord.
It is also using funding from the Bill & Melinda Gates Foundation to advance work on a vaccine against Group B Streptococcus (GBS), the leading cause of stillbirth and newborn mortality in low-income countries.
"This type of accord is a very good model, it's going to help get medicines out," Gates told the Davos conference, adding that "partnerships with companies like Pfizer have been key to the progress we have made" on efforts like vaccines.

Tweets by @forbesindia
Oil, gas firms use Ukraine war to resist climate efforts: report
Is the metaverse taking us a step closer to immortality?