Russia and Ukraine near grain deal in first talks since March

Shipments across the Black Sea have been blocked both by Russian warships and mines Kyiv has laid to avert a feared amphibious assault. The stakes could not be higher for tens of millions of people facing the threat of starvation in African and other poor nations because of the battles engulfing one of the world's main grain-producing regions 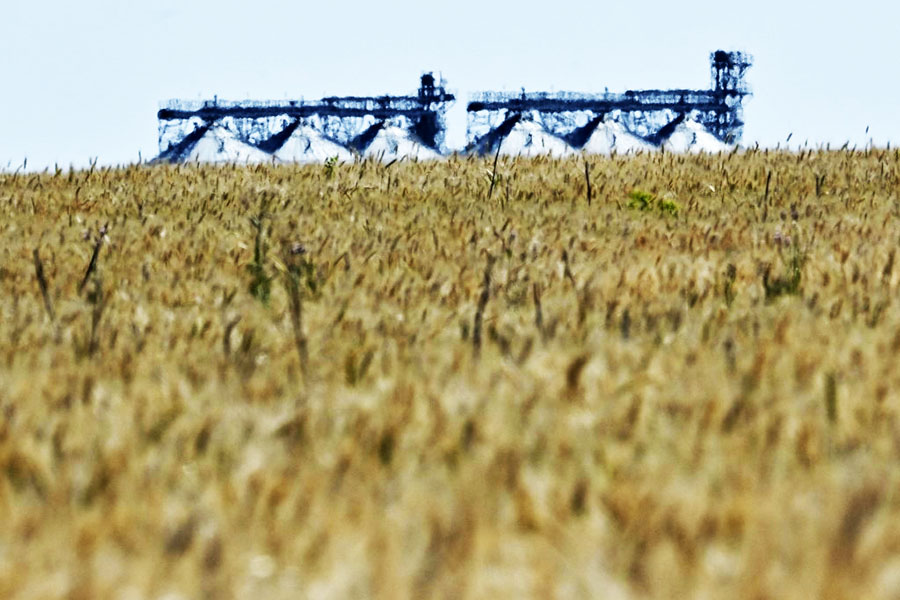 A photograph shows a grain elevator behind a wheat field in Ukraine's eastern region of Donbas, on July 1, 2022, amid Russia's military invasion launched on Ukraine. Between a lack of fuel and the risk of being bombed, some Ukrainian farmers are wondering how they will harvest their fields as the period for certain crops approaches in July. Image: Genya SAVILOV / AFP

Russia and Ukraine on Wednesday made substantive progress in their first direct talks since March on a deal to relieve a global food crisis caused by blocked Black Sea grain exports.
The high-stakes meeting involving UN and Turkish officials in Istanbul broke up after slightly more than three hours with an agreement to meet again in Turkey next week.
Ukraine is a vital exporter of wheat and grains such as barley and maize, and has supplied nearly half of all the sunflower oil traded on global markets, but shipments have been disrupted since Russia invaded its neighbour in February.

UN Secretary-General Antonio Guterres said the talks had provided a "ray of hope to ease human suffering and alleviate hunger around the world" but cautioned that while he was optimistic, a deal was "not yet fully done".
Turkey's defence minister signalled that a final agreement could be announced at the next talks.
"At this meeting, which we will hold next week, all the details will be reviewed once again and the work we have done will be signed," Hulusi Akar said in a statement.
The stakes could not be higher for tens of millions of people facing the threat of starvation in African and other poor nations because of the battles engulfing one of the world's main grain-producing regions.
Shipments across the Black Sea have been blocked both by Russian warships and mines Kyiv has laid to avert a feared amphibious assault.

The negotiations are being complicated by growing suspicions that Russia is trying to export grain it has stolen from Ukrainian farmers in regions under its control.
Russian authorities in Ukraine's southern region of Kherson on Wednesday countered with accusations that Kyiv's forces were deliberately burning crops and mining fields.
US space agency data released last week showed 22 percent of Ukraine's farmland falling under Russian control since the February 24 invasion.
The two sides entered the talks saying that a deal was close but some contentious issues remained.
Russia said Tuesday that its requirements included the right to "search the ships to avoid the contraband of weapons"—a demand rejected by Kyiv.
The initial agreement announced by Akar said the two countries agreed on "joint controls" at ports and on ways to "ensure the safety of the transfer routes".

Kyiv has asked that a friendly country such as Turkey accompany its ships along safe "grain corridors" that avoid known locations of Black Sea mines.
Experts say de-mining the Black Sea is a complex operation that could take months—too long to address the growing global food crisis.
NATO member Turkey has been using its good relations with both the Kremlin and Kyiv to try to broker an agreement on a safe way to deliver the grain.
Turkey says it has 20 merchant ships waiting in the region that could be quickly loaded and sent to world markets.

The talks in Istanbul come ahead of a meeting in Tehran next Tuesday between Turkish President Recep Tayyip Erdogan and Russia's Vladimir Putin.
Erdogan's ultimate goal is to bring Putin and Ukrainian President Volodymyr Zelensky down to Istanbul for talks aimed at pausing the fighting and launching formal peace talks.
But the Ukrainian army warned this week that Russia was preparing to stage its heaviest attack yet on the Donetsk region—the larger of the two areas comprising the Donbas war zone in eastern Ukraine.
Ukrainian officials said at least five people died in Russian shelling on the region surrounding the Black Sea port city of Mykolaiv.
Emergency services recovering bodies from a destroyed residential building in the Donetsk town of Chasiv Yar said the death toll from a missile strike on Sunday rose to 48.
The overnight attack now represents one of the deadliest incidents of the nearly five-month war.
"You never get used to war. It's dreadful and scary," 60-year-old Lyubov Mozhayeva said in the partially destroyed frontline city of Bakhmut.
The Russian army has not conducted any major ground offensives since taking the last points of Ukrainian resistance in the war zone's smaller Lugansk region at the start of the month.
Analysts believe the Russians are taking an "operational pause" during which they are rearming and regrouping forces before launching an assault on Sloviansk and Kramatorsk—
Ukraine's administrative centre for the east.
Ukraine is trying to counter the Russians by staging increasingly potent attacks with new US and European rocket systems targeting arms depots.
US officials believe the Russians are trying to recoup their losses by negotiating to acquire hundreds of combat drones from Iran.
By Dmitry ZAKS with Frankie TAGGART in Kyiv
© Agence France-Presse

Tweets by @forbesindia
From Barack Obama for narration to Chadwick Boseman for 'What If...?': Five key takeaways from Emmy nominations
In a Post-Roe world, the future of digital privacy looks even grimmer