The Western economic penalties have largely severed the country from the international financial system, making it difficult for Moscow to service its debt, and Russian authorities insist they have the funds to honour the country's debt 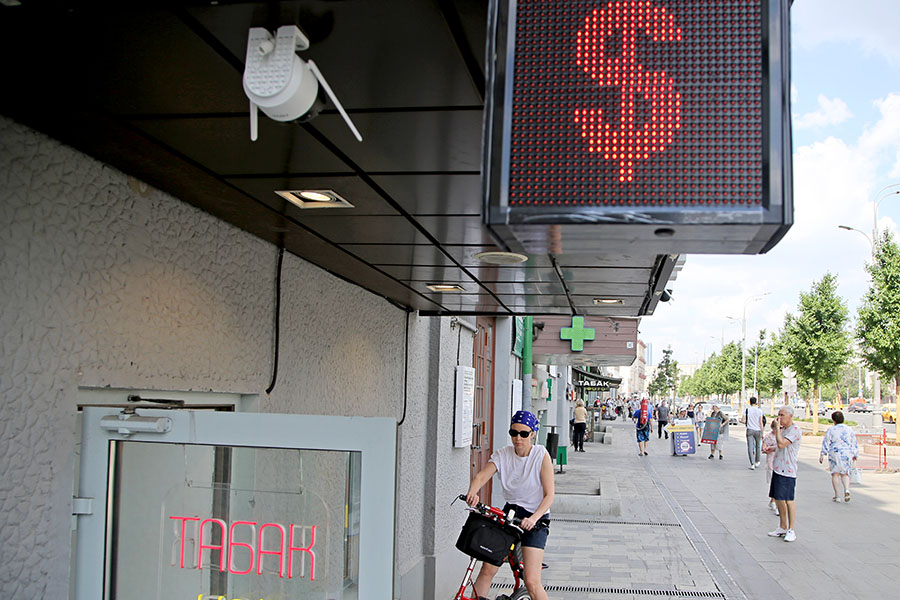 A woman pictured by a U.S. dollar sign at the entrance to the exchange office on June 27, 2022, in Moscow, Russia. Russia has defaulted on its foreign debt for the first time in over a century, after a grace period on missed interest payments expired on Sunday. Image: Contributor/Getty Images

Moscow, Russia: Russia said Monday that two of its debt payments were blocked from reaching creditors, pushing the country closer to its first foreign default in a century due to sanctions over the Ukraine offensive.
The announcement came on the 124th day of Russia's military intervention in Ukraine, with Western sanctions so far failing to force the Kremlin to change its course.

The Western economic penalties have largely severed the country from the international financial system, making it difficult for Moscow to service its debt.
The Russian authorities insist they have the funds to honour the country's debt, calling the predicament a "farce" and accusing the West of seeking to drive Moscow into a default artificially.
"There are no grounds to call this situation a default," Kremlin spokesman Dmitry Peskov told reporters after a key payment deadline expired Sunday.
"These claims about default, they are absolutely wrong," he said, adding that Russia settled the debt in May.
Russia lost the last avenue to service its foreign-currency loans after the United States removed an exemption last month that allowed US investors to receive Moscow's payments.
Also read: Why the Russian ruble keeps rising

A 30-day grace period for the payment of $100 million in interest payments expired on Sunday night, most of which had to be paid in foreign currency.
Russia had attempted to make the payments, but the finance ministry said Monday that the money had not been transferred to creditors.
International settlement and clearing systems "received funds in full in advance" but the payments were not transferred to the final recipients due to "the actions of third parties," the ministry said in a statement.
"The actions of foreign financial intermediaries are beyond the Russian finance ministry's control," the statement said.
While some experts dismiss the event as a technical default, others say it will have far-reaching consequences.
"This default is important as it will impact on Russia's ratings, market access and financing costs for years to come," said Timothy Ash, an emerging markets strategist at BlueBay Asset Management.
"And that means lower investment, lower growth, lower living standards, capital and human flight (brain drain), and a vicious circle of decline for the Russian economy."

But Liam Peach, emerging Europe economist at Capital Economics, a research group, said a default was a "a largely symbolic event that is unlikely to have an additional macroeconomic impact".
"Sanctions have already done the damage and locked Russia out of global capital markets," Peach said in a note.
The sanctions included freezing the Russian government's stockpile of $300 billion in foreign currency reserves held abroad, making it more complicated for Moscow to settle its foreign debts.
After the United States closed the payment loophole last month, Russia said it would pay in rubles that could be converted into foreign currency, using a Russian financial institution as a paying agent, even though the bonds do not allow payments in the local currency.
The country last defaulted on its foreign debt in 1918, when Bolshevik revolution leader Vladimir Lenin refused to recognise the massive debts of the deposed tsar's regime.
Russia defaulted on domestic debt in 1998 when, due to a drop in commodity prices, it faced a financial squeeze that prevented it from propping up the ruble and paying off debts that accumulated during the first war in Chechnya.
The International Monetary Fund's number two official, Gita Gopinath, said in March that a Russian default would have "limited" impact on the global financial system.
© Agence France-Presse

Tweets by @forbesindia
Crypto regulation will help with mass adoption: FalconX's Raghu Yarlagadda
How edtech is adapting to children back in classrooms